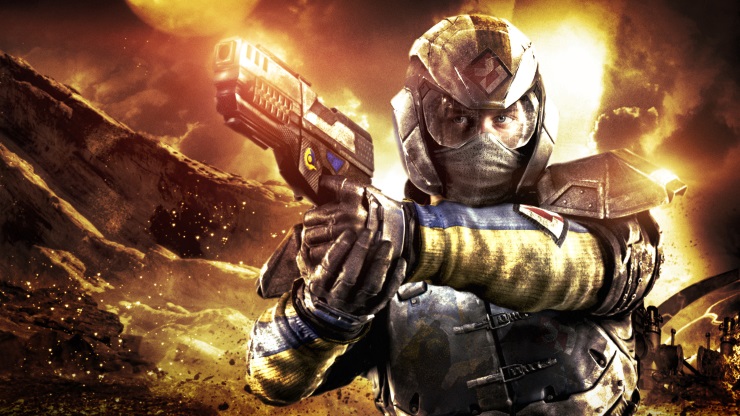 Jets soar overhead. To my left a dozen tanks duke it out over the mouth of a valley, to my right 50 foot soldiers charge towards the enemy stonghold. Bullets start to ping around me, explosions rock the ground as my feet carry me closer to the frontline. This is war, and it’s brilliant.

Planetside 2 is actually getting on a bit now, having released on PC in 2012, but it’s finally come to PS4. The selling point is its scale, and it really is insane, with 1000’s of players duking it out on a single server at any one time. Of course, this number is broken down somewhat, with players spread over four continents, themselves comprised of up to 75 outposts – but at its best Planetside 2 still manages to see 200+ players fighting over a single objective. It makes for some fantastic and brutal action; you can spend an hour frantically defending an outpost before launching a counter attack and sweeping your opponents away.

The scale may be what makes Planetside 2 stand out from the shooter crowd, but the gunplay is much more traditional. To start with, you create a character by picking one of the three factions. Each has a unique style of weapon or vehicle to play with, but they’re broadly similar. And that’s pretty much it. You’re dumped in the starting zone and left to it, with little direction beyond “kill anything that has different coloured armour”. When you finally work out what a weapons station is, you can switch between several different classes on the fly, adjusting various loadouts as you go. While the Light Infantry and Medic are available straight away, more advanced classes such as the sniping Inflitrator and super-armoured Max are locked behind level gates, as are the various tanks, APC’s and jets. At first this feels a little unfair, especially when you can see other players using them, but it’s actually a stroke of genius because Planetside 2 demands teamwork. Going lone wolf will only get you killed, so starting as one of the basic classes means that you learn to rely on your teammates, sticking with them as you assault an enemy stronghold.

Respect is even more important when it comes to vehicles, as they actually come at a cost. Each costs a set amount of nanites, a slowly regenerating currency, meaning that once you have a tank you’ll want to keep it alive, because if it dies you won’t be able to spawn a new one for a while (you can only control vehicles you spawn, though you can jump behind the turret of another player’s). This means you treat vehicles as valuable, and you’ll find yourself retreating to a safe point to preserve them, or risk life and limb as an engineer to repair an ally’s.

It helps that almost every action gives you XP as well. Repairing damage, healing an ally, capturing an outpos all help you develop, with bonuses available if you’re helping the squad you’re assigned to. It promotes teamwork even more, and means that playing something other than a frontline grunt is a valid option. Being free-to-play, there are various incentives to throw some money down, but Daybreak has been careful to make sure they’re not pay-to-win. Most obvious is the subscription to Premium memberships. At a princely £79.99 a year, this grants you a permanent 50% bonus to all XP gained, meaning you go up the levels faster. That said, you still need to be playing well to get the XP in the first place, so it doesn’t undermine the learning curve too much.

Premium members also gain 48 certification points per day. This is the currency used to buy new weapons and equipment for your characters, but it can also be earned through regular gameplay; one point for every 250 XP and extra for medals earned. Weapons and equipment can also be outright bought with real money, as can time limited boosts, but again it isn’t game breaking; no weapon is particularly overpowered and it all boils down to skill.

As you can see from the screens, Planetside 2 is quite a looker. With snow, desert and jungle to fight across there’s always plenty of colour, and the day/night cycle actually changes how you play. The art style is great, with futuristic bases and technology complementing the colourful palette, and the sound design is fantastic too. Planetside 2 does have its problems though. With little direction, it can feel like a hitting your head off a brick wall when you first jump in, and even later on things are remain opaque: every so often a timer appears on the top right, ordering you to capture a specific continent in the time frame, and only by googling it did I find out that doing so reduces the nanite cost of a certain vehicle type. More problematic is the field of view though, which dramatically reduces in busier battles. Tanks pop into view a few paces away, and sniping at any decent distance becomes impossible. The latter also reveals the less detailed textures used for objects at a distance – normally replaced when zooming in – which are downright ugly.

The largest issue is a player made one though. On the continent you’re currently in you can go around the map, checking the amount of players fighting over each outpost to pick a decent battle to join, with hotspots highlighted by glowing icons. While there may be two or three 150+ conflicts going on, whole swathes of the frontline are empty. Worse, you can’t see the player levels on each continent, so if your current one is totally empty you have to wait through the minute loading time to travel to a new one, which itself might not be that populated.

Don’t let this put you off though. When you find a battle, there’s nothing else quite like Planetside 2, and you can stay with the same battle group for hours, pushing forward, retreating or even just duking it out over a single outpost. It’s fantastic fun, and the variety of roles you can play means it never gets boring. That all of this can be enjoyed for free is just the icing on the cake.

Massive scale.
Infantry, tanks, jets - what more do you want?
It can be played completely free.

A brilliant free shooter that offers an experience unlike any other.