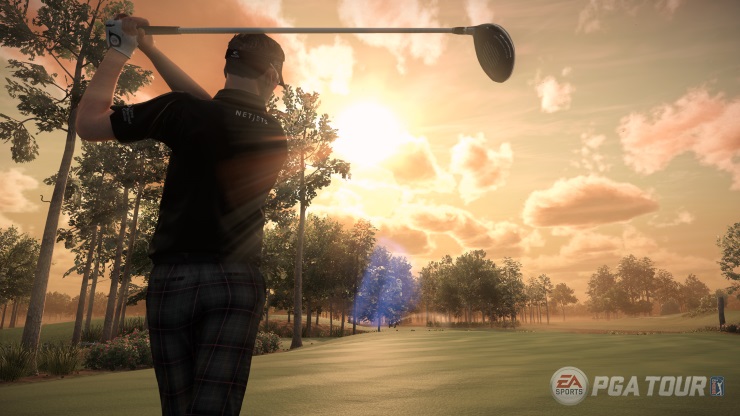 I have a bit of a love/hate relationship with golf. Try as I might, I just cannot watch it when it’s televised. Yet, put me on a pitch and putt or crazy golf course and I could happily play all day. Alongside this, I find going a few rounds on golf games to be a great way to spend my time, sinking hours upon hours into Sony’s Everybody’s Golf series and several of EA’s PGA Tour titles. I skipped downloadable title The Golf Club and, with the newest entry in Clap Hands’ series still a while away, I was looking forward to EA’s rebranded game hitting our shiny new consoles.

And so, here we have the latest entry in EA’s PGA Tour series. It took a hiatus in 2014 due to severing ties with Tiger Woods and has been rebuilt from the ground up in DICE’s Frostbite engine – famous for its use in Battlefield and Plants vs Zombies: Garden Warfare – and it shows. Looks are excellent in some places, but competent in others, which is odd for a style of game that isn’t traditionally aesthetically taxing. Immediate impressions aren’t favourable: menus are clunky and laggy, with inputs either not registering or taking a while to execute. Frame rates seemingly drop with menu selections, while icon fade-outs and new segment fade-ins judder during their transitions. It’s a FIFA style menu system that really just obfuscates how to access all the game’s modes. Stroke play, multiplayer (online now complemented by the fact other golfers are rendered alongside you playing, rather than taking it in turns), challenge modes and, of course, the career championship are all present and correct but packaged within a menu system that’s just dreadful to navigate.

For a series that has twenty-five years of pedigree behind it, it’s not surprising that Rory McIlroy’s PGA Tour gives you a rather brilliant game of golf. In play the courses are beautiful to look at, grass bends in the wind, clothes crease with movement, divots fly up on harsh swings, water shimmers and glistens as light reflects on its surface, golfers have the most immaculately sculpted buttocks; seriously, in play it is lovely. You can choose from three initial swing types – Arcade, Classic (Three-click) and Advanced – but now you can customise your own difficulty of swing. Want to be able to shape your shot so you can easily adjust your draw or fade, but not be able to adjust spin mid-flight? That option is now available to you, so you’re not restricted to the standard presets. There’s a rather extensive tutorial to help you get used to the swing mechanics, which you can skip, thankfully. If you decide to go through with it, there’s a prologue you’re required to play through, interspersed with some terribly boring monologues from Mr McIlroy himself. Once in, this entire section is unskippable – you have been warned. Skipping all that isn’t the worst thing you can do, as there’s plenty of scope for going out and playing eighteen holes of any of the eight courses to help you get a feel for how it all works.

Sound is excellent: you’ll hear every thunk of club on ball, rustle of flora underfoot, the whoosh of club shaft through the air, and it’s all made better with a headset, giving you a feeling of being right there. I seriously challenge anyone to not get pumped after the crowd roars build in your ears as you pull off a fantastic green shot under regulation and follow it up with an eagle; it’s a truly fantastic feeling. The commentators let things down here somewhat, though, often repeating themselves and regularly calling shots incorrectly. Also, while I can understand the legacy of McIlroy’s forebear, the constant references to Mr Woods’ achievements makes it seem like they’re struggling to let him go. The Tour Pro mode is where the majority of players are going to spend their time; here you’ll create your own golfer and take them from a beginners’ tournament and raise their profile to compete in the tour against the pros. For starters, there’s a dreadful lack of customisation options: there’s a bunch of facial presets to choose, but no way to tweak individual facial features; there are body types, but no way to scale it how you want it, and set play styles which dictate your stats, but no way to customise where you want your points to be set. Gear is earned through performances through your career, and consistent efforts result in better gear. It’s an odd departure from the older games where you could fine tune so much and buy the gear with winnings. I get the simplified approach, but they have taken that idea to a needless extreme.

As you play through, more issues come up: graphical glitches mar scorecard and info screens as textures pop into existence, while animals, people and entire buildings completely vanish from view. There are the odd framerate dips when the camera tracks a putt or shows your character reacting to a shot. It’s so odd that the points at which the game’s engine behaves so poorly are those where it actually has the least to do.

It also suffers from a startling lack of content at launch. The game launches with twelve golfers and eight courses; that’s less than half the amount contained in previous versions (which, coincidentally, cost less at launch). EA has said that it will be supporting this in a similar way to Nintendo with Splatoon in which it will release regular, free content after launch. That’s all well and good, but we’re yet to hear just what form this extra stuff will actually take. Much has also been made of the Battlefield-inspired Paracel Storm course, which we were introduced to a while back with footage of a battleship crashing into one of the holes. On this course, every hole is a par three and that boat crash only happens once – aside from that, there are no other events that occur during your time playing through the eighteen holes, which makes this themed course feel like a missed opportunity. I kind of hope EA push out more in the way of franchise-themed courses – a Dragon Age, Mass Effect or Mirror’s Edge could be cool if they put more thought into their execution than this.

When all is said and done, Rory McIlroy’s PGA Tour Golf is a solid game of golf, and can eat up hours and hours of your time if you’re not careful. For it to do that, though, you’ll need to look past the terrible menu experience, the obvious graphical problems and put up with the lack of courses until more are released. It’s no longer a Tiger Woods game by name, but you do wish they had retained more of the older titles’ ideas and content.

Excellent representation of the actual sport.
Sound is sublime.

No longer a Tiger Woods game in name, but you do wish they had retained more of the older ideas. But while there's not much content here, it still plays a superb game of golf.