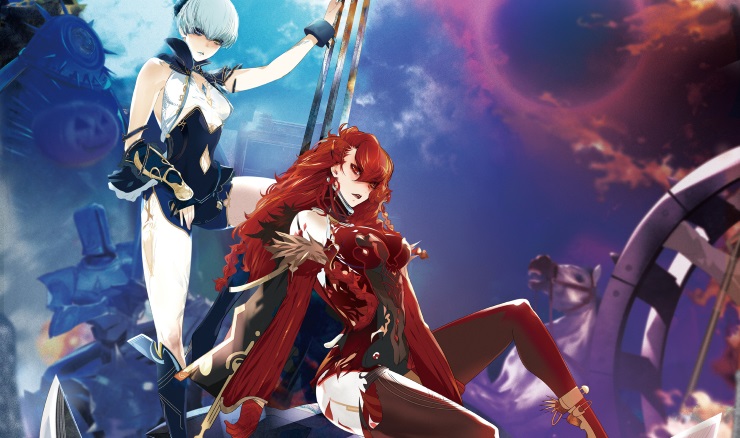 Deception IV: Blood Ties‘ Vita release was my initiation to the series. As a newcomer, I didn’t know what to expect, and the trailers presented something I could only describe at the time as “kooky”. Essentially, it’s a variation on a strategy title, except instead of planning an attack on an opposing army, stacking attacks and tactics, your targets are small groups of enemies invading your fortress, and you stack traps with which to defeat and humiliate them.

As witch Laegrinna, you must aid your three sisters in finding a collection of artifacts that will return the Devil to Earth. This is done by inexplicably torturing and maiming invaders, instead of just killing them or using your ridiculous powers to summon an army of some kind. You might think it would be hard to make hitting someone directly in the face with a ten-foot axe-blade amusing, but Deception IV just about manages it. Eschewing gore and gratuitous violence in favour of over-the-top slapstick, Tecmo’s game is an enjoyable enough romp that never takes itself too seriously, but which gets pretty old pretty fast. As a result, I was surprised to see a new version popping up. Shipping with the standard game as well as the Nightmare Princess expansion, it offers a decent amount of content, but nothing that really justifies its re-release onto a current-gen console for anyone other than diehard fans. Setting up a series of traps on the grid-based floor is no different here than it was before, for instance, and it can still be just as fiddly to correctly line-up a springboard with a beartrap, swinging axe and electrified wall. It has had nothing resembling a graphical overhaul, either. It’s slightly smoother, sure, but it’s no flashier on PS4 than it was on Vita.

The vanilla game remains completely unchanged, and you can read that review here – but it’s the additions that go some way to making the package worth picking up. While there’s nothing revolutionary, the expansion brings in around 100 new quests in a new campaign, and features redhead Velguirie, whose magic is supplemented by her ability to kick. A big deal is made of this, which is almost laughable at first, until you start using it and realise just how useful a move it actually is. Using it to position enemies for traps, as well as stun them so you can quickly escape, makes it a very handy trick to have, and one that adds just a little more tactical depth to Velguirie’s adventure.

The plot is as nonsensical as ever, but that really doesn’t matter. The fact is, if you’re a fan of this series, you’ll know what to expect and you won’t have come for the involving narrative – you’ll have come for the genuinely unique gameplay. Thankfully, Nightmare Princess adds plenty of that, even if the environments do seem smaller and, unfortunately, heavily recycled. If you fancy a switch from the usual routine, you can jump into the new Studio mode, a level creator that lets you build and share your own gallery of pain. You’re able to customise a great deal, from the environment and decor to each individual enemy, and there’s a solid selection of parts to build from. These have to be unlocked by playing through the campaigns, but that’s not really a big ask. It certainly beats hiding them behind pay-walls. While the aesthetic variations are many, that’s all they really are: aesthetic. Aside the visual flares, traps work in around four or five different ways, and the repetition will set in after a few hours of play, even when you’re creating your own bespoke levels.

Much of Deception IV’s charm comes from its unashamed campness. It doesn’t take itself seriously, and made an arguably brave choice considering today’s gamer to stick to the franchise roots and avoid over-the-top blood and guts. As it stands, it’s a tactical adventure with a twist, and one of few genuinely unique games available. There’s an argument to be made against re-releasing it on PS4, as it’s a fair bet that if you really wanted to play it, you would have done by now, and the additional content isn’t really enough to justify the full pricetag. However, all that being said, it’s one of those games that offers a harmless, mildly taxing and original challenge and doesn’t ask much in return. If you haven’t tried it and don’t know of the series, it’s a difficult game to recommend wholeheartedly; if you are a series fan, the new character, questline and Studio mode make Deception IV: The Nightmare Princess something of a no-brainer.

A good entry point to the franchise if you want one, but The Nightmare Princess has much more appeal for established fans.