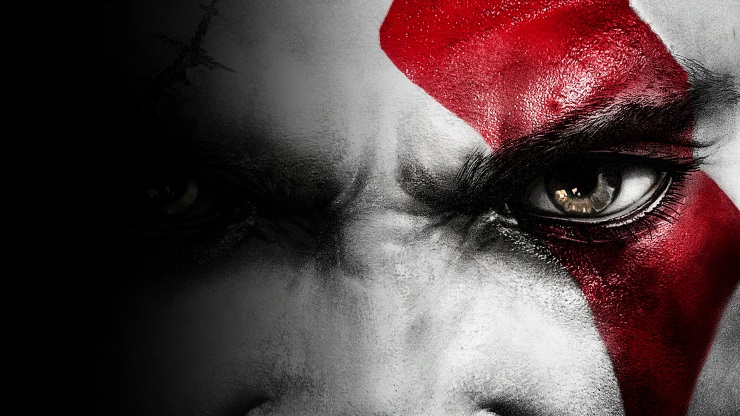 It’s funny what time can do to a person. Many of us resist aging with special face creams or surgery, while others try to find a haircut that doesn’t show that they’re thinning up top at the age of thirty-four. But you do get less angry in time, that’s a universal truth. Thankfully, Kratos never stops being angry. In fact, I’ve often thought it a shame that Santa Monica didn’t fully embrace the ridiculousness of the God of War games, and give him a daft catchphrase.

Digressions, early-onset mid-life crisis, and the oddness of releasing the third game in a trilogy as the first game on your newest console aside, this remaster does one thing very well: it reminds us all that the God of War games were, and still are, a tremendous, visual treat of a video game series, but also that they’re cocks-out fun – the equivalent of a summer blockbuster that nobody should be ashamed of enjoying.

Protagonist Kratos has lost his family, and the long and short of it is that it’s all the Greek God Zeus’ fault, who actually also happens to be his father (so he hasn’t lost all his family, I guess). His journey is one of pure, unadulterated (but with plenty of adultery) rage, interspersed with excruciatingly graphic quick-time events that finish off his foes. And it’s brilliant. Opening with a scene so bombastic and absurd, you take control of Kratos actually riding a behemoth, the building-(and then some) sized rock-monster (Gaia, if it matters), who is climbing to the top of mount Olympus so you can finish the job on Papa-electric. Nothing ever goes our hero’s way, and before long you’ll have to go through a nine to ten hour kill-a-thon before, hopefully, setting the world to rights. So violent is God of War III, it should come as no surprise that a family reunion soundtracked by Cats in the Cradle isn’t on the cards.

And on a very basic level, this is a well made hack and slash with extraordinary set pieces that take centre stage, and really haven’t been bettered since. Combos are available, but not really required; save for the higher difficulty levels – which are brutal, by the way, and there’s a block button, with dodge mapped to the right stick. You’ll be launching enemies into the air and racking up huge combos before you know it, because it remains as accessible as ever. As is standard for the genre, new weapons unlock as you progress, and so superb are the boss fights (that Chronos fight is incredible), they egg you on, meaning you’ll almost certainly blast through the campaign within a few days.

But there’s very little here for returning players, aside the actual remastering itself. A smooth 60fps is the big draw, with the 1080p visuals backing it up. God of War III always looked good, and some of the environments are wonderfully epic in scope, and remain so today. Of course it’s aged slightly, but this really doesn’t look horribly out of place on the PS4; that is, aside from a few textures upon closer inspection. No extra modes, no director’s commentary. It’s unfair, perhaps, to castigate it for being just a simple remaster, but it’s important you know that’s exactly what it is. If you’ve never played a God of War game before, you’re in for a treat. The third is the best installment (though Ascension isn’t nearly as bad as people make it out to be), and this is the best version by far. It’s bombastic, over the top, and feels like a lot of money was spent on it. It’s full of quick-time events, but you get the feeling that in Sony Santa Monica’s minds, every completed action is rewarded with a more bloody, violent result than the last. In that respect, there’s a tremendous catharsis to the combat. You’ll feel an ounce of shame every now and again over just how gratuitous it is, and you’ll cringe as you click L3 and R3 to burst Poseidon’s eyes, but it’s impossible not to feel that it’s rewarding. Kratos is pissed off, and although there’s never even the slightest nod or wink that Sony know it’s way beyond the pale, amazingly, somehow, that overtly sincere nature doesn’t harm Kratos’ adventure.

God of War will never be Shakespeare, but it’s a bloody good time that doesn’t take the player for granted. Maybe that’s why it was remastered, after all, then: to remind us of what games can be, if we just let them take us on a journey. A daft, angry, bald journey, led by a screaming topless Adonis that lets us kill everything that moves. Fair play, Sony.

Still a superb game.
Actually benefits from the 1080/60 treatment.
A reminder of how great the series is.

The remaster is aesthetic-only.
Story will be hard to pick-up for newcomers.

A daft, angry, bald journey, led by a screaming topless adonis that lets us kill everything that moves. Fair play, Sony.