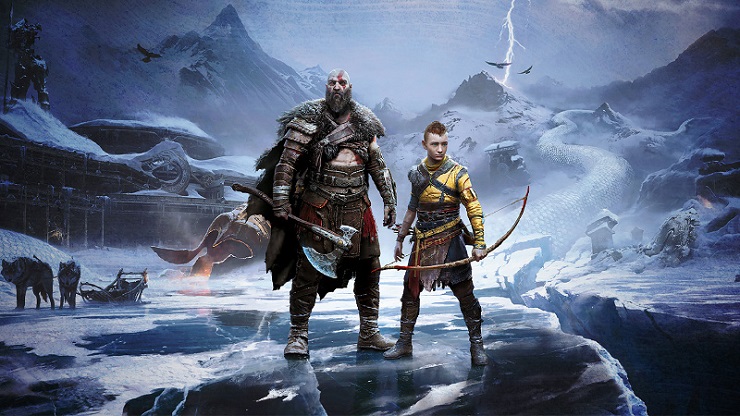 How do you build on a game as close to perfection as God of War? Going into the second part and final instalment of Kratos and Atreus’ story, I was scared that the strong feelings and emotional connection I had to the first one wouldn’t be matched, or that there was something in God of War Ragnarok that would let me down, disappoint, or simply not live up to the excitement I’d been feeling since it was announced. However, it took mere minutes until I realised this was going to be something incredibly special, and as I put the controller down some thirty hours later, I was left in awe at the masterpiece I had been fortunate enough to experience.

To say God of War Ragnarok is ambitious would be an understatement. From its sprawling world-building to its impassioned and powerful story, Santa Monica Studio never takes its foot of the gas, putting every ounce of heart and soul into everything it has created. There are multiple moments that stay with you throughout, and I lost count of the amount of times I cried, laughed, and was left with my mouth wide open. I don’t say this lightly, but there’s a high chance this will go down as one of the best PlayStation exclusives, if not the best of all time.

Combat consistently evolves, with new mechanics being thrown at you every step of the way. Beyond the Blades of Chaos and the Leviathan Axe, there are other things in your arsenal that unveil themselves, but it would honestly spoil it for you if I was to reveal just what these are. Kratos’ two biggest weapons can be switched on the fly, utilising them for different enemy types depending on if they have a weakness to ice and fire. They can also be used to solve environmental puzzles in new and interesting ways, and they both flow so well together. 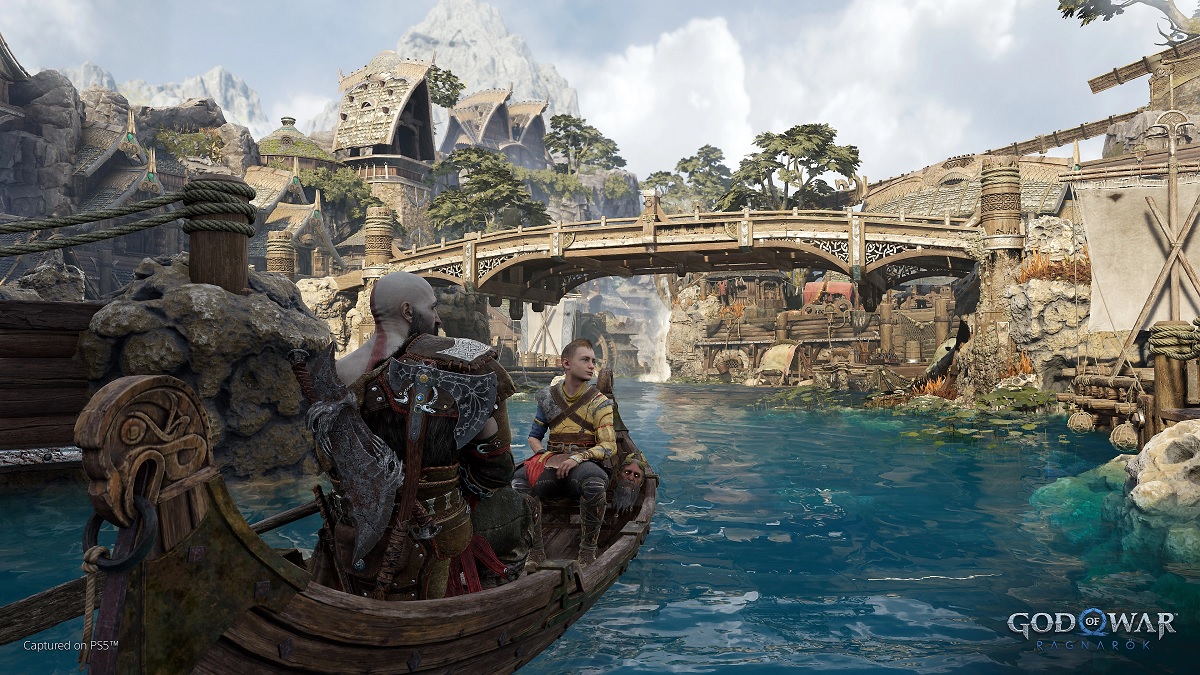 It takes a lot of practice to make them work in unison, and without total focus in battle, you’ll be at the mercy of a whole manner of foes. You can level up your weapons to make them more powerful; improve various stat lines; unlock new abilities, and more. When you’ve used a certain skill so many times, the option to add a buff to it gives you an extra edge in combat. There’s a hell of a lot to get used to, but once you figure out how to attack properly, fighting is sublime. Different armour can provide a range of perks, and amulet sets will also offer some additional improvements when crunching skulls and ripping through the hordes of monsters.

Throughout God of War Ragnarok, there’re countless creatures you’ll have to slay. Your shield is a vital piece of equipment as there’ll be moments where you’re overwhelmed by enemies attacking all at once. Some attacks can’t be blocked, so you’ll rely on parrying to create some space and make a returning strike to catch them off guard. Every weapon can utilise a light and heavy Runic attack that, again, can be upgraded to do more damage and stun. Some of these attacks are not only great damage dealers, but they look incredible when being pulled off. In fact, the sheer range of attacks on offer have all been animated beautifully. 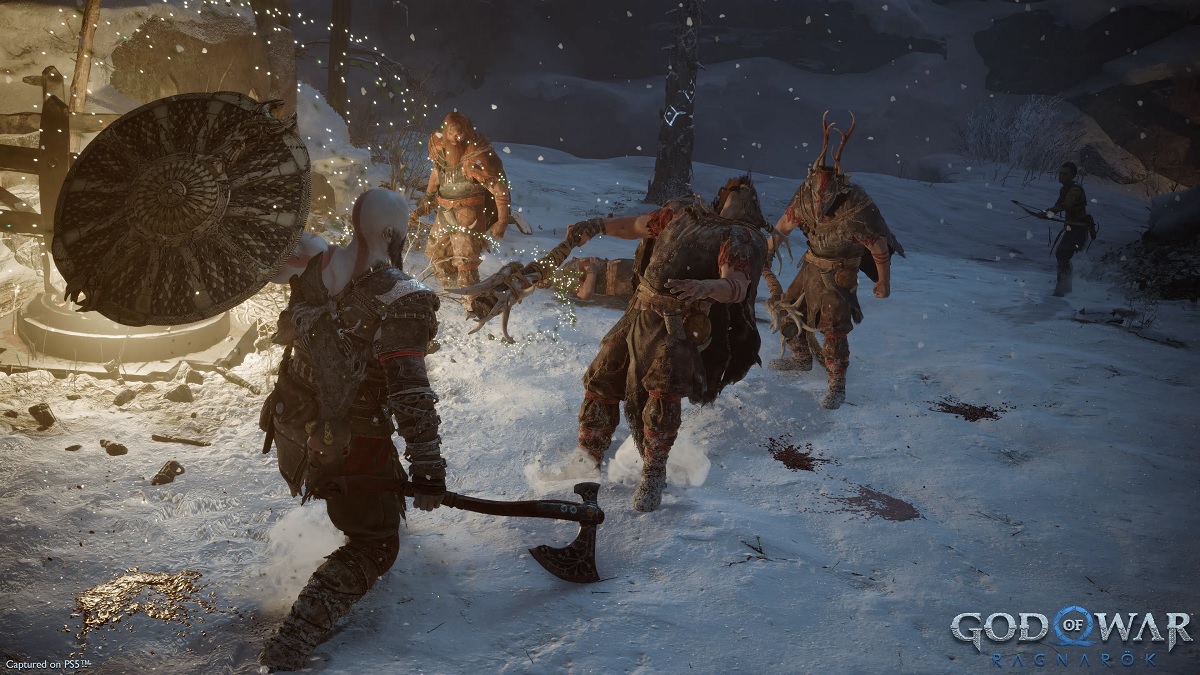 The boss fights are some of the most amazing encounters in the game, pushing you to use every ability you have, and upon defeating them, the way Kratos rips their jaw off their face, crushes their skull with a pillar, or uses his chains to throttle them until the light leaves their eyes is a sight to behold. The fluidity of combat and movement surpasses the original and makes full use of the technology available on the PlayStation 5. This extends to the environments of God of War Ragnarok. The Nine Realms all harbour different biomes, and each one has been meticulously and masterfully designed.

Vanaheim is filled with beautiful fauna and lush landscapes; Muspelheim looks like hell itself, populated by lakes of lava and volcanoes; and Svartalfheim is filled with stunning architecture thanks to the handiwork of the Dwarves that live there. Some of the realms are utterly delightful to look at. Cutscenes often blend into gameplay segments, sometimes leaving you gawping at the beauty that surrounds your every move. This was never more apparent than when the game enters its final stretch. I have never witnessed such an incredible sight, and I have no doubt that others will be just as blown away as I was. Quite simply, this is a gorgeous game to look at.

Playing out alongside the main story is tons of side content for players to get stuck into. Everything blends into your main focus, as certain quests or puzzles will provide you with new equipment or powers, as well as upgradable new armour and resources. Shooting the ravens scattered around the nine realms; completing Favours for people, closing demonic portals; unlocking chests with runic locks on them; collecting flowers and artefacts; and slaying Berserkers are just some of the opportunities you’ll have in your playthrough. There’s scope to spend so much time in this phenomenal world Santa Monica has created. 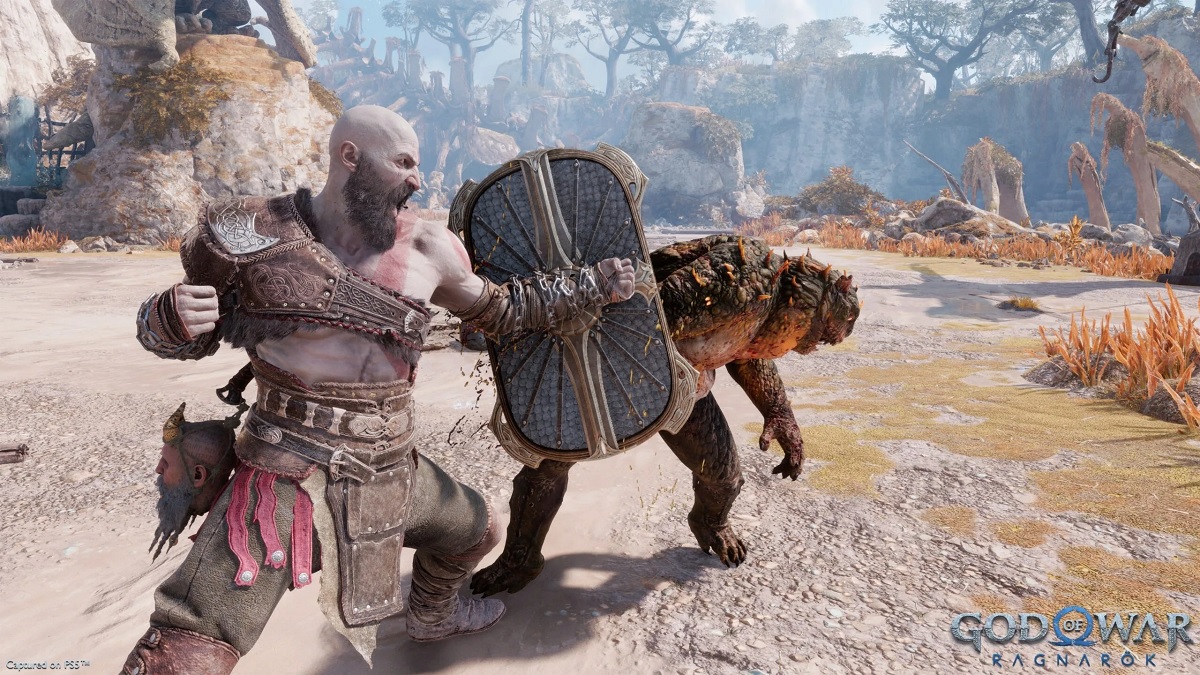 In terms of the story, God of War Ragnarok is filled with some beautiful moments. It is also filled with pain, joy, love, anger, and humour. Brok, Sindri, and Mimir are all on top form, with the Huldra Brothers playing a major role in the overarching narrative. After the death of Baldur in the previous game, the Gods are furious with Kratos and Atreus. Freya, Odin, and Thor all want revenge, but it is never as simple as that. The gods are fallible and by no means perfect, and as a result, they’re led by the same kind of emotions as mortals. These threads of revenge and forgiveness are tied to every story beat, with unexpected friendships being forged, and redemption never far away.

It is how Kratos and Atreus are entwined with these ideas that make the story so interesting. At the end of God of War, Atreus found out he was also known as Loki, and this is something that plays a vital role in Ragnarok. The acting from everyone is award-worthy, and proof that the video game medium shouldn’t be overlooked. I was so moved by some of the performances, and my own heart broke just as some of the characters dealt with grief, loss, and suffering. Some characters are utterly brilliant, though. Mimir manages to break tension and provide light humour when needed the most, and his quips never failed to make me smile. I can’t stress enough just how epic and special the story is, and I hope others are able to get as much from it as I did.

God of War Ragnarok is the definition of a masterpiece. It’s story will move you to tears, fill you with joy, and make you feel emotions you never knew were there. There’s so much to do throughout, with combat that consistently evolves and new mechanics added that never feel arbitrary. The Nine Realms are designed with care, and are some of the most wonderful worlds featured in a video game, even featuring areas that can’t be reached until new powers are unlocked later on. The layers in its design and its story will be talked about for years to come, and all those fears of it not reaching the same dizzy heights of the original dissipated shortly after once again taking control of the finest warrior the PlayStation has ever seen.

Some enemies are tough

God of War Ragnarok is the definition of a masterpiece, featuring some of the best combat of all time, a gripping, poignant, and ambitious story, with so much to do you'll never want it to end.