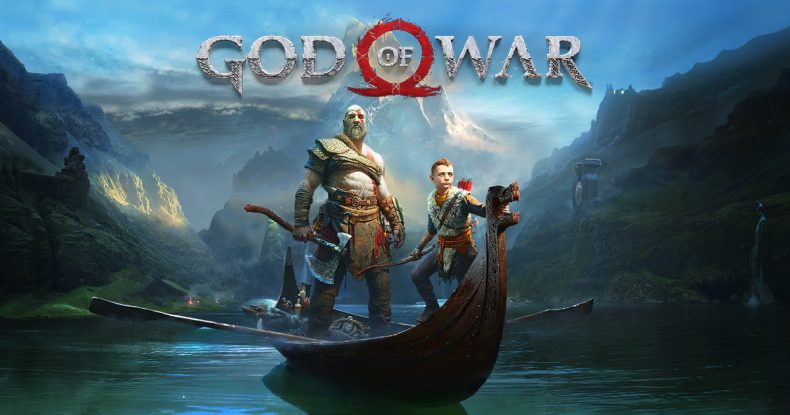 Within the first 30 minutes of God of War, I realised it was going to be special. After a breathtaking and moving scene, followed by some hunting and tutorials, then an incredible fight with an unwelcome visitor, you set off on a journey that will leave your jaw on the floor. This is the finest God of War yet, and for those that hold Horizon Zero Dawn or Bloodborne dearly at the top of their favourite PS4 exclusives, this could certainly change things. It’s going to be tricky to explain some things without giving anything away, because this is a more story-heavy God of War than ever before, so I’ll be intentionally vague: I don’t want to ruin this, and you’ll most certainly want to experience the splendour of this one on your own, especially since this one contains some of the best moments in modern gaming. Have I hyped this up enough? Good, because it’s a phenomenal game.

Kratos and his son Atreus are living in seclusion, but after someone comes knocking on their door, the future for the Greek God is left hanging in the balance. He wants to live in peace, away from the dangers of the world both to protect his son, and to forget his past. Unfortunately, things go awry and the two are sent on a journey to scatter some ashes at the highest peak in all the realms. You visit many famous locations from Norse mythology, and encounter other Gods and monsters you’ll be familiar with, but the way they’re incorporated is spectacular. The visuals are impressive – from the snowy peaks of Midgard to the haunting and death-riddled realm of Helheim. The character design and animation is incredible, and the way in which you engage in combat, or watch a cutscene play out leaves you admiring every facet of it. In fact, the cutscenes are so well done they are almost unnoticeable: they segue seamlessly between gameplay and at times you’re not even sure you’re watching one, or playing one – they’re that good. In fact, this quality stretches to the direction of the game in general. The camera work is exemplary throughout, giving yet more emotional weight to moments both light and dark.

The combat is vast and rewarding, and the ways in which you fight every enemy will be different from one to the next. If you’re fighting a Giant Ogre, Draugr, or Hel-walker, there’s a need to change tactics on the fly. Your main weapon is the Leviathan Axe – perfect for dealing frost damage to your enemies. R1 provides a faster strike, whilst R2 allows you to hit harder but slower. You use these differently dependent on the enemy, as well as using L1 to ready your shield for protection. Some Ogres use long range attacks which can be blocked, and there are lots of different Draugrs that will run at you, be heavily armoured, or launch projectiles at you to make sure you and your son perish. The ability to throw your axe at enemies is one of the coolest things you can do, whether it’s straight at an enemy’s head or to freeze a mechanism, it looks great – forget Mjolnir, it’s all about the Leviathan Axe. You get opportunities to build the strength of your axe by finding upgrades in chests, or going to two dwarves who’ll become your friends – Brok and Sindri, two brothers who’ve fallen out, and whose story alone provides some much needed humour throughout the heavy and dramatic narrative elsewhere. As well as upgrading your axe pommel to provide more power or runic ability, you can change your two Runic attacks. These attacks are activated by holding down L1 and pressing the relevant button to unleash the power of the Leviathan Axe, providing they’re highlighted or they’ve been through the relevant cooldown process. You can create a path of frost spikes, charge at enemies with your shield, and lots more. There’s a selection of armour on offer, with each piece improving your main body of stats, such as Strength, Luck, and Cooldown. All of these cost money (Hacksilver, here) but some not only give you added abilities, they also look badass. Even Kratos needs to look good, you know.

One of the best combat features is the use of your son, Atreus. He isn’t as strong or agile as you, but his bow can provide a much needed distraction. By pressing square Atreus will fire arrows at enemies, and it can distract them, allowing you to get a satisfying thwack in. They also help stop witches teleporting, which is a massive help. Atreus will eventually get good at melee combat, and he’ll jump on enemies to steady them, allowing you to strike while the iron’s hot, or the Draugr is frozen. All of his stats can be leveled up assuming you have enough XP for the both of you, and his Talon Bow and armour will get some tasty upgrades too. The main story is impactful, emotional, funny, and exhilarating. The set pieces are ridiculously impressive, and the pace never feels slow, or too quick to follow. The relationship between Kratos and his son grows more and more as the story progresses, and by the end you care greatly for Atreus, just as much as you care for Kratos. The voice acting is also excellent, and even the supporting cast pull off some fantastic performances. I could name a few, but like I said earlier, you’re going to want to meet them for the first time when you play it. The music is so good, thanks to the wonderfully talented Bear McCreary (of Battlestar Galactica and The Walking Dead fame). There are some sombre moments when the music plays so powerfully, you may just shed a tear (and that’s just the opening 10 minutes or so).

Aside from your main journey, there’s plenty to do elsewhere. While the game may be fairly linear, in some respects you’ll travel further than you’ve done in most games. Think Uncharted rather than Horizon, especially Lost Legacy. You can collect items to unlock new realms, defeat Valkyries, do favours for both Brok and Sindri, use treasure maps, find artifacts, free spirits, or just go and explore this expertly crafted world. There are elements of Metroidvania, where you go back through past locations and use abilities you didn’t have before, or explore places you hadn’t seen. There’s easily an extra 15 or so hours outside of the massive 30-hour main story. This is not your average game, it’s huge, despite being a smaller “open-world” than most games offer, it’s packed with content that’s actually enjoyable to do.

This is easily up there with the best games of this generation, and it’s the easiest ten out of ten I’ve ever given. When you think you’re reaching a point where the gameplay slows down, you’re introduced to something better. This is by no means a game just for original fans of the series either. Due to the new setting, newcomers will enjoy it just as much. It’s welcoming and punishing, but ultimately satisfying, and the benchmark has been set firmly for the future of video games. A masterpiece.