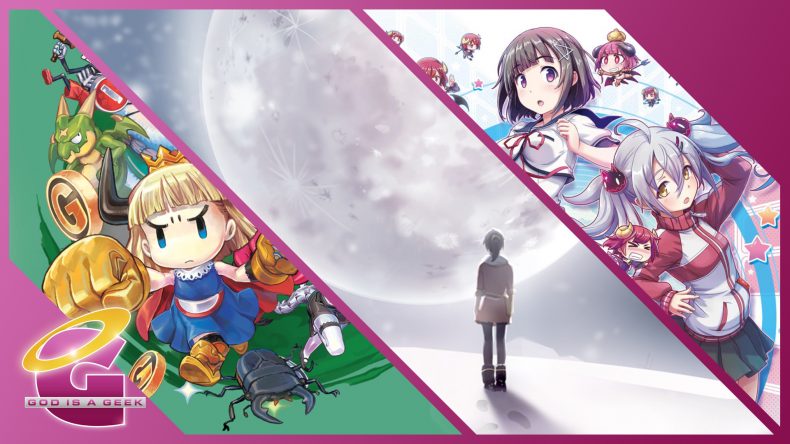 Switch Re:port #11 will cover one game that I’m still surprised is on a Nintendo platform, a sequel to an amazing game, an interesting small brawler from NIS, and more. The Re:Port series for those unaware, looks at Switch ports of games on other platforms or just a Switch game in general that is being covered. Inti Creates is back with a new Gal*Gun game after Double Peace and this time PS Vita has been dropped for Nintendo Switch. This game has borrowed a lot from the VR spinoff Gal*Gun VR and gives the player a bit more freedom overall. The core gameplay still has you shooting pheromones at girls to send them into orgasm but there are a few new mechanics. Overall the game is a few steps forward and a few backward from Double Peace but for Nintendo only gamers, this is the first Gal*Gun experience on the platform and the port is very good.

The PS4 release runs at 60fps and the Nintendo Switch version runs at 30fps. This is one the two big downgrades in visuals and performance. The second one is load times are longer on Switch and in some cases far too long for what’s such a simple looking game without free movement. Thanks to Unreal Engine however, the game looks great in both modes. The Switch version also has 2 big advantages over the PS4 version. This is obviously the only portable version (well hybrid version) and you also have the option of using gyro controls for all aiming. While the implementation isn’t as good as say Splatoon 2, it is a welcome addition and a worthy differentiator for this version over the PS4 version. The PS4 controller has the hardware to allow this but only Switch games seem to implement this functionality and go all out. The PS4 and Switch versions both support gyro aiming while zoomed in but only the Switch version has full gyro control even outside.

Overall having played a good amount of both games, even with the frame rate being half, I’d recommend the Switch version over the PS4 version for Gal*Gun 2. I absolutely adored OPUS: The Day We Found Earth on the Switch when I covered it here. Rocket of Whispers is the next entry in the OPUS series from SIGONO. Just like the original, this game saw a release on the Switch and it is a drastically different game but still has a lovely and heartwarming story. The problem is this great story is locked behind loads of survival and gathering segments with some sections that feel like padding. Overall, I loved the story here but the gameplay in the middle feels too grindy and some dialogue feels a tad too forced initially.

I’m not a fan of survival and gathering bits at all and even though the exploration bit is good here, many situations and a vague map result in revisiting or roaming around aimlessly looking for something before you get an option to use a hint. The payoff in the end is great and it almost makes up for a lot of the padding gameplay sections. Thankfully there’s still some great music and a lot of nice side quest sections with stories that feel real and relatable.

OPUS: Rocket of Whispers while not as great as the previous game, is still well worth your time if you enjoy games with heartwarming stories. You will need to tolerate some padding to get ahead in the story sadly. When I saw this pop up on the eShop, I knew I had to review it. The visuals had this very nice Sin City like art style for the non match 3 segments with some nice character models. I’m no stranger to match 3 games and even ones with nudity but almost all the ones I’ve played at least had a decent match 3 mechanic. This one fails at that and is just a plain poor experience overall. I’d have much preferred Metropolis: Lux Obscura to be a visual novel with that art style and those themes instead of one with a bad match 3 game attached.

While this has been on other platforms, I found it quite hard to play with a controller as compared to the touch screen. I’m glad that touch support is here because match 3 games play considerably better on a touchscreen without having you to scroll using the d-pad. So as a Switch port, this is very good but as a game it is not worth your time unless you’re a die hard for a Sin City like aesthetic and need a new match 3 game with it. I love that despite doing games and sequels for their bigger franchises, NIS takes loads of chances on smaller games from smaller teams. My favourite horror game is Yomawari: Night Alone and I enjoy all the smaller titles from NIS that NIS America publishes. When this game was revealed for Vita in Japan as The Princess is Money Hungry (rough translation), the core mechanic piqued my interest. You play as a princess who bribes enemies and traps around the arena to serve you in a brawler with fun combat. I was interested to see how it played on the Switch in docked mode because it made a lot of use of the Touch Screen on Vita. Aside from some difficulty spikes, this is a fun game to play for any fans of brawlers.

This release was originally built for the PS Vita and in many cases, there are low resolution assets when viewed on TV or docked mode. Performance wise, there are some situations where many enemies are on screen causing random slowdowns. Gameplay wise, the touch controls work a lot better and this plays great in handheld mode.

I wish the difficulty spikes weren’t as annoying because this is a fun experience with some good humour and an interesting gameplay mechanic.

You may also like
gal*gun 2opus: rocket of whispersFeatures