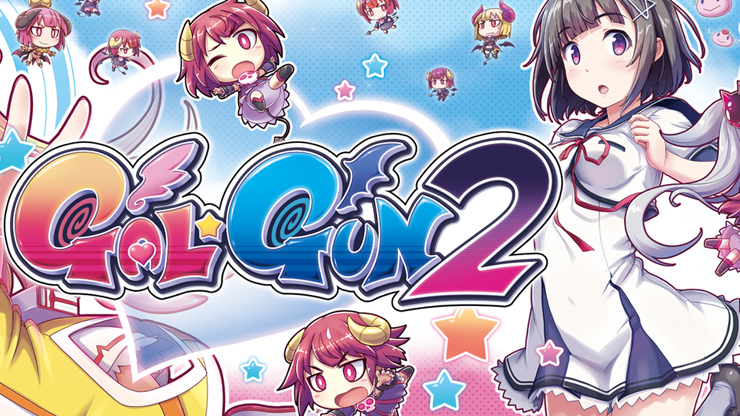 When PQube originally localised Inti Creates’ Gal*Gun Double Peace, it was flawed but fun. More importantly, PQube pulled off another one of those “I can’t believe this game officially released in the West!” moments. Inti Creates went on to port that to PC and even release Gal*Gun VR soon after. Double Peace was actually the second Gal*Gun game with the first one remaining unlocalised in Japan on PS3 and Xbox 360. Now, Inti Creates is aiming for something bigger with a proper sequel in the form of Gal*Gun 2. This drops Vita support and adds a Switch version. While just Double Peace being localised was pretty mindblowing given the content, we now have Gal*Gun 2 on a Nintendo system which is pretty crazy when you think about it. If you aren’t aware, the Gal*Gun games are all about you shooting girls with a gun that makes them orgasm. That’s the core gameplay and is usually on rails with a few segments where you get a bit more freedom of movement. You have been chosen from Heaven to cleanse girls from demons. While Double Peace was fairly linear, this one gives you more freedom and even has various side quests. The way you play and which quests you do will affect the endings you can get. The cast of girls is also mostly new including the teachers for the school. You have your own daily schedule that allows you to do a fixed number of activities before moving to the next day. Kurona returns from Double Peace to make your life hell as well and you even have a girl next door character who helps you out. When it comes to the actual gameplay, there are some changes here. You have a vacuum attachment to your pheromone gun that lets you suck demons into it and even use it to blow air around for a possible upskirt shot (I’m not kidding). Movement feels like you’re playing a console VR shooter with teleportation movement because you have to aim and fire and possible positions to move to. This feels weird considering there’s no actual PS VR support as of now in the game. Another weird omission is gyro controls. Granted, most shooters don’t support gyro but this one literally has gyro aiming when you zoom in and has a Switch version that supports gyro aiming everywhere. The normal girls who come running to attack or kiss you are of 2 variants. One gets satiated by normal shooting while possessed ones need you to shoot the demons near them first to cleanse them before sending them into a fit of ecstasy. Visually, Gal*Gun 2 looks good and feels like a slight upgrade over Double Peace in every area. It also runs really well. If you’re thinking of going Switch or PS4 for this one and frame rate matters to you, the PS4 version is the one to get by far. If you need to know how the Switch version looks and runs, check out the new Re:Port. Voice acting is still Japanese only here as expected. I was hoping for free movement and not a VR focussed teleportation here. In a lot of ways this still feels like an expansion to the first game rather than a full new entry that actually takes it forward. If you’ve never played a Gal*Gun game before, you will no doubt have fun here if you enjoy fanservice. If you did get it, this isn’t worth rushing to pick up immediately. I’m glad PQube continues to localise these kinds of games because they’re always fun to play and no other publisher even dares touch games with this much fan service. Inti Creates needs to do more for the next entry for sure to be worth recommending.

Fun for newcomers
Some outrageous situations that are funny

Gal*Gun 2 is a fun time if you haven't played the previous entry but quite a drag if you have with some weird design decisions throughout.