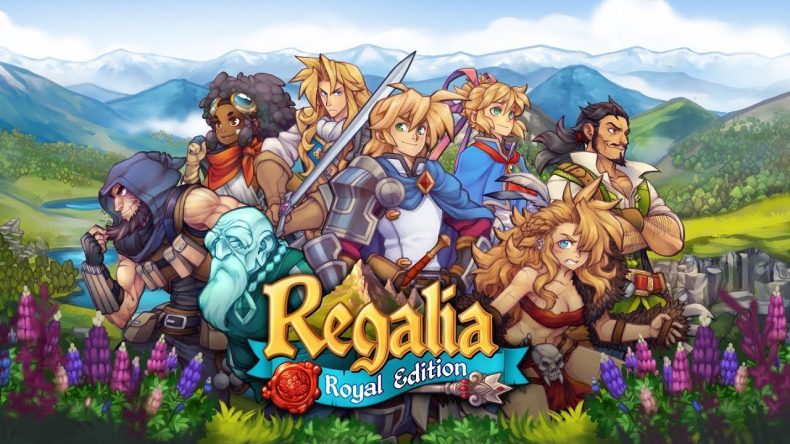 Imagine waking up one day and finding out that due to a relative’s untimely death you were now a ruler of a kingdom. Sounds good doesn’t it? Being in charge, not having to answer to anyone, ahhh, that’d be good. Well, now consider that all the previous lords of the lands you now inherit had accrued a great deal of debt and now – due to you fumbling your way into the wrong place at the wrong time – you are now responsible for paying it back.

This is the predicament that Kay Loren finds himself in, when he and his two sisters Elaine and Gwendolyne, faithful soldier Griffith and the spirit of an ancestor Kay unfortunately managed to imbibe, he sets about reclaiming the kingdom’s former glory and repaying the astronomical debt he’s been lumbered with.

What follows is an exercise in time and kingdom management, you’ll have a specific amount of days until the debt collector is due to show up and you’ll need to reach particular milestones before he does. To do this you’ll need to go out on quests to gain materials to improve the kingdom’s facilities, meet people to staff them and also spend time with your people so you have a devoted township. The actual kingdom management is fun, with materials being quite plentiful on quests there should rarely be a structure you can’t build or improve, and mingling with the people is a pleasant distraction thanks to some excellent writing. I mean seriously, the script in Regalia is brilliant, there’s a terrific wit at play here with superb comic timing. Each character is well rounded and it’s hard not to warm to their personalities. Griffith’s stoicism could have been annoying, but it’s presented in a very charming way. It’s hard not to like Gwendolyne as well, despite her rather cold manner, and I’ve lost count of how many times I’ve started giggling as mage Aliss cackles maniacally before screaming ‘Explosions!’. It’s exceptional work and it’s really the game’s biggest standout feature, aside from the excellent artwork.

Where Regalia falters, it has a tendency to obfuscate. Battle tips and information is shown to you by way of still text screens rather than by demonstration, and as a result you’re left to figure out what things do. I skipped three turns in the very first battle because I wasn’t aware which buttons did what, and the game doesn’t really tell you. If you see your way over that particular hurdle the combat isn’t too bad although it is slightly clunky. Characters have a pre-allocated action slot based on their initiative stat, the higher it is the sooner they can move. You can move or commit to an action in any order, and each character has a set of actions where some are powerful but take a while to cool down, while others can be used more regularly but don’t deal as much damage.

Massaging your relationships with all the characters helps too, as good reputation unlocks skills and boosters to aid you. One such move is Signy’s ‘pounce’ move, but she can’t jump to a spot she can’t see; however, get your reputation up with her and she’ll be able to leap to spots hidden from her line of sight, very handy. Thing is, it’s not just character line of sight that can hamper you, the one afforded to you by the game’s camera angle can really frustrate. Trying to pick a square to aim at is rather difficult when an enemy unit is covering it up, and there’s no way to make them translucent so you can see where you’re selecting. This and the aforementioned UI button issue are obviously throwbacks to a mouse driven interface, but really shows how hard it is to map this to a controller input.

I do feel I need to stay on this tangent now though, as there are other important things the game really doesn’t tell you. For instance, you can walk around camps and your kingdom and interact with people and ‘nodes’, but at times characters and nodes are too close together, so you’ll spend a lot of time trying to jostle Kay into just the right position so he will interact with the thing you want him to, only to find yourself hitting the one you didn’t want. Thing is, the game doesn’t tell you that by pressing R2 or L2 you can cycle through the nodes currently within reach. It’s incredible infuriating.

I will stop going on about this, but I just want to warn you of one more thing. You need to make sure you read things very carefully, especially when saving your game, because you don’t just push ‘X’ to select, oh no. When you’re in a save screen and you highlight a save to overwrite, you MUST push square (as indicated by the really small icons at the bottom of the screen) because, if you push X it’ll load that save instead and you’ll lose a lot of progress. I think I lost an hour and a half to that mistake. I don’t want to be too down on the game really, as it’s great fun, and a really nice throwback to strategy RPGs like Final Fantasy Tactics and Disgaea. It’s got a terrific cast of memorable characters and it’s full of really nice touches. For instance, you want to skip a cutscene? Go right ahead, the game will give you a synopsis of what you decided to ignore. There’s also story based segments in each ‘dungeon’ you enter where your decisions can either land you in a fight or with a reward for using a bit of savvy, and considering all the text the quality of the writing doesn’t falter at all. Pixelated Milk has done a great job on creating a world and a cast just bursting with personality.

What’s sad though is that the game was obviously designed for use on a PC interface (considering it was launched on PC in May last year) and hasn’t quite made the transition to console intact. If you can look past the rather cumbersome input method you’ll find there’s a good game here. If you can just give Regalia a go it’s likely the excellent script will keep you rapt until the end. Who would have thought that paying off debt could be fun?

If you’ve been crying out for a good console strategy RPG you should give Regalia a go, it’s not perfect, but it’s an exceptionally well told yarn.

You may also like
regalia: of men and monarchs