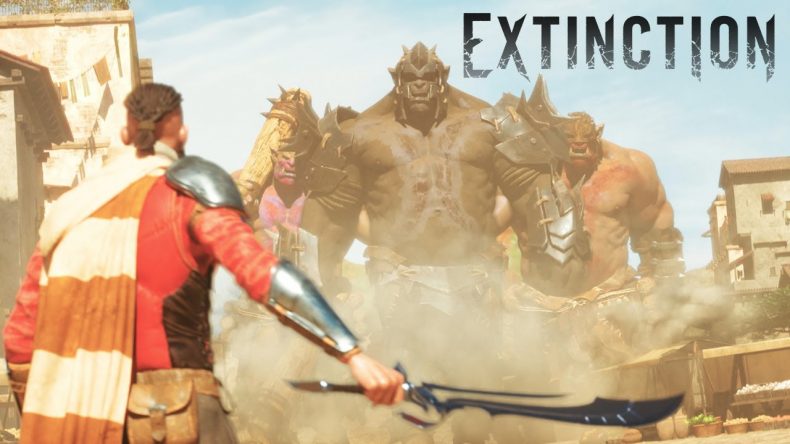 Isn’t it strange how concepts that sound amazing, can actually turn out to be quite dull? It’s a very downbeat way to begin my review of Extinction, but it honestly sums up my feelings on my time with the game. The story will sound familiar to fans of a certain anime, but in this world the humans are very much living in fear of the Ravenii; a race of ogres and very orc-like creatures, most of which tend to stand 150 feet tall. These massive beings lay waste to entire cities, killing anything that happens to get in their way. It’s up to Avil, the last of the Sentinels, a group of warriors with the power to defeat these Ravenii, to fight back against the beasts and save as many innocent civilians as he can in the process.

The idea of fighting such massive beasts probably conjures up images of Shadow of the Colossus, or perhaps even the great Divine Beasts of Breath of the Wild, but in actuality they are nothing more than tedious distractions in one of the most videgamey experiences I’ve played in a while. Now, there’s nothing wrong with being very much a videogame, but you can’t help but feel a disconnect between the obvious attempt at creating epic fantasy battles and the actual gameplay that consists of meeting very specific objectives and following big lights that reach up into the sky.

There are numbers and bars everywhere. The percentage of buildings left standing, the number of civilians left alive, the arbitrary energy meter that you inexplicably need to fill by saving civilians and killing the smaller Jackals (human-sized versions of the giant Ravenii), in order to lop off the heads of the bigger enemies. Everything about this game feels out of place somehow, and it never recovered, losing my interest very early on and then feeling incredibly drawn out as a result. I was reminded of Barbossa’s speech in the first Pirates of the Caribbean movie: “I feel nothing. Not the wind on my face nor the spray of the sea.” It captures my feelings while playing Extinction. After the first couple of hours, I felt numb; I was simply going through the motions, not enjoying a single aspect of the gameplay. It certainly looks nice, though. It has a visual style that sits somewhere between Wind Waker and Breath of the Wild, which fits nicely alongside the stunningly animated 2D cutscenes that punctuate the end of chapters. There’s a real sense of epicness about the presentation, especially when a giant Ravenii takes out buildings with a swing of its meaty fists, spraying rubble and dust everywhere. It’s just such a shame that the gameplay simply cannot match the presentation.

The actual controls are incredibly simple; you can jump, attack (with combos created through varying up your timing of each button press), rescue citizens by holding Triangle on PS4, dodge and you even have a grapple hook that can latch onto certain areas, propelling you into the air. L2 on PS4 activates your most important skill however, slowing time down as you target the various limbs and pieces of armour on the Ravenii.

Early giants will be fairly easy to take down, as they wear little to no armour whatsoever, allowing you to simply sever their limbs to slow their onslaught. Once you’ve filled the metre to enable the killing strike, you simply climb up to their neck and use your targeted strike to take off their head and end the battle. The first fight will feel good, giving you a sense of achievement; but other than changing their armour and giving them weapons, once you’ve fought one Ravenii, you’ve basically fought them all. The game does try to change things up a little, with different armour types require mildly different strategies against the Ravenii, and some missions don’t even require you to fight any of them, instead requiring you to save a number of civilians or simply survive for a certain amount of time. You’ll have to watch the destruction though, because if the entire town/city is destroyed you will fail and have to start again.

One of the biggest problems I face was during the watchtower missions. You’re expected to stop Ravenii from destroying all the watchtowers in the area, surviving for a set number of minutes before the mission is complete. There are two problems here: nobody likes protection missions, and especially not when certain Ravenii armour types prevent you from actually being able to slow them down or, in some cases, even get high enough to fight them at all. You’re supposed to be able to grapple to their wrist armour or the pouches on the back of their belts, but often the game just doesn’t allow it. When you fail a mission purely because a glitch (or even poor design, which is worse), it begins to chip away at your patience.

The game’s other big problem, its biggest actually, is that it just isn’t very good. The camera shits the bed during most of the Ravenii battles, especially if you’re somewhere near its feet. When you do manage to get a good angle, often the critical strikes won’t activate or they’ll take an age to line up, made even worse by the wild flailing of the monsters’ arms. It just feels like you’re constantly fighting the game itself, as well as the enemies. Whereas Shadow of the Colossus managed to vary up every battle, changing the environments as well as the creatures, Extinction does nothing really new after the first hour. The arenas shuffle through the same few visual styles and the Ravenii barely change at all, except for skin variations and the odd differently shaped ogre. It just feels so cut-and-paste that you’ll wonder if you’re actually progressing at all.

Extinction is a great idea. Extremely derivative, granted, but a great idea nonetheless. How then, I found myself wondering throughout my time with the game, did Iron Galaxy take a premise like fighting giant monsters, and make it one of the dullest experiences imaginable? Sure, everything is presented with wonderfully colourful style, but there is very little substance to back it up. The controls and camera barely work, and the plot is barely even there, told through excruciatingly lifeless reams of dialogue at the beginning and end of each stage; I just can’t recommend playing Extinction.

The premise of Extinction is brilliant in theory, but its execution is boring and hindered at all times by a camera that refuses to point where you want it to, and a control system that often doesn’t even respond to simple commands.

Rumbleverse gets a release date