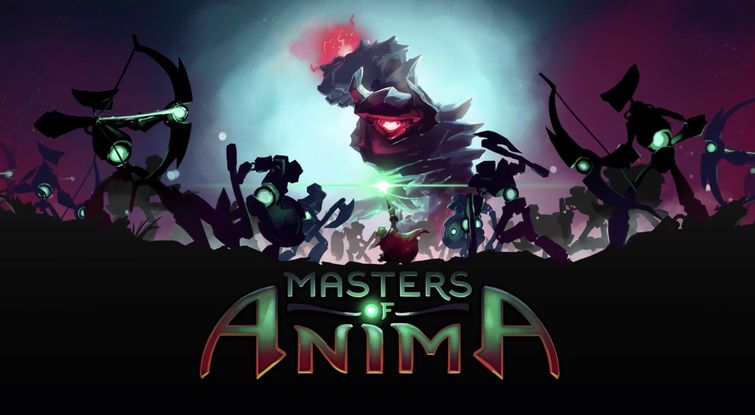 Masters of Anima is a perfect example of a great idea sloppily executed. A fantasy adventure game with more than a hint of Overlord (or even Pikmin) about it, it takes place in a world where ancient Golems once waged war on humanity. To defeat them, the Shapers were created, mages able to weild a power known as Anima and construct Guardians, mindless drone soldiers built purely to fight Golems.

Your character is Otto, an apprentice Shaper forced into conflict with an evil nutjob called Zahra, who has “sundered” his lover Ana and is attempting to unleash the ancient powers of the Golems on the world.

To be honest, the story is pretty straightforward, and sees Otto travelling the land through various themed locales fighting Golems as they pop up, while also looking for hidden secrets that will boost his Anima and Health. Because Otto is useless in a fight, you’ll need to summon Guardians to protect him, as well as solve puzzles scattered around the land.

The right trigger allows you to summon and control your Guardians, and you can then direct them where you need them to go, order them to push blocks and statues, activate ate switches, or destroy the red crystals that fall from the sky and block your progress. It’s actually a pretty good concept and one we’ve seen used to great effect in the past. You have standard fighters, ranged units and magical units, five types in all, and each has its uses where puzzles and combat are concerned. The problem is that everything about Masters of Anima feels like a chore. For example, you can level up with XP and improve the skills of Otto and his Guardians, but you can only upgrade between levels. The levels themselves seem to go on for ages, and it only checkpoints at specific moments, meaning if you stop halfway through or rage quit due to the ridiculous difficulty spikes, you’ll often have to do the entire level again.

Said difficulty spikes occur in the combat scenarios, when you’ll usually have to fight one, two or three Golems. These enemies have enormous health bars and massive AoE attacks. They’ll often target Otto himself, but will usually go for the Guardians, decimating units in one or two hits. Even when you spend some XP to upgrade your units, the upgrade only effects their CHANCE to mitigate damage. Since your Anima is finite (you have a set number of Orbs, which you can increase with collectibles) and your units get mashed so easily, you’ll run out of Anima most fights, which is tantamount to game over. One Guardian type can drain Anima from Golems and pass it to Otto, but the process is pretty slow.

Because your Guardians are mindless, you have to move them and position them, tell them when to attack and when to flee. When you have two or three Golems throwing rocks, charging you, activating distance and proximity AoE attacks and slamming the ground in front of and around them, the ploddy, clunky controls will almost always work against you. And if you don’t finish an enemy quickly, they’ll enter a rage mode and do extra damage for the duration of the fight. You can boost your units at the cost of an Orb, to increase damage, defence or activate secondary skills, but you’ll need most of your Orbs just to keep units in the field.

You’ll need to constantly cycle through your Guardians, and to select smaller numbers of them you have to use the slowest cursor ever. Ranged units can hide in bushes, but I’ve seen no evidence of this offering any real cover. Combat is messy, frustrating and poorly designed – which is an issue when there’s so much of it. Each level is fight after puzzle after fight, with little variety to either, and the first time I got tired enough of it to go play something else I came back to find it hadn’t checkpointed and I had to do the whole level again. Elsewhere, Masters of Anima is decent, though never great. There’s a certain personality to the script that raises the occasional smile, but follows the overdone Casual British Humour template that you’ll have seen a million times before. Graphically, less is more, so it looks nice and colourful, but the textures and detailing are simple. Think “Torchlight on medium settings” and you’re about there.

It’s almost as if someone told the developers that gamers only want granite-hard challenge in adventure games these days, and they went overboard trying to please. But the difficulty doesn’t feel natural; it feels as though the enemy HP and damage has been pumped up while your numbers have been reduced, and the result is an uneven experience that feels intentionally skewed against you. I’m all for games being tough until you’ve learned their systems, but the difficulty should increase gradually as you progress, not skyrocket after the first level. Sometimes you’ll barely win a fight by the skin of your teeth only for a second foe to spawn immediately, when you’ve used all your Anima. There’s no backing out and no viable way to get more, and when you reach the point where you’re kiting an enemy while your last unit desperately tries to syphon enough Anima to summon another group – and then when you do they’re instantly squashed by the raging Golem – it’ll take a certain level of willpower not to just accept that life is too damn short and play something else.

Masters of Anima is an infuriating experience with far too much going on that’s simply too unfairly balanced to be considered fun. Much of the game feels like an uphill struggle, and there’s very little pay off or reward, so when you do hammer your way through a fight after three attempts you don’t feel a sense of relief or accomplishment, you instead feel like you just begrudgingly cleaned your bedroom. And then you’ll probably immediately have to do it again. There was potential here, but it has been largely squandered, and the result is an overly-difficult slog that rarely feels compelling enough to want to keep going.

There was potential here, but Masters of Anima is ultimately a bit of a letdown.

Masters of Anima is a lovely little surprise of a game