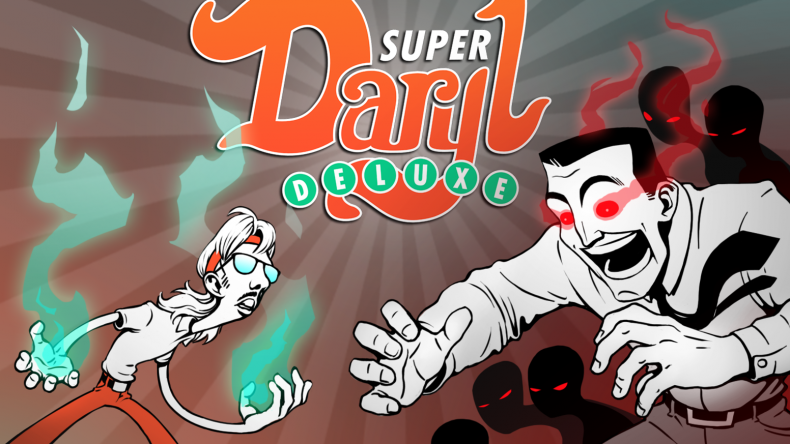 Where to start with the game as huge as Super Daryl Deluxe? The 2D RPGvania, side-scrolling beat-em-up is a mashup of so many different pop culture references, real life historical figures, supporting characters, enemies and bosses that it’s going to make your head spin.

Super Daryl Deluxe opens in a 40s esque setting with yourself and your partner playing the part of detective, attempting to save The Princess from the evil Trenchcoat. After fighting a few bad guys Daryl snaps out of his daydream, as he has work to do. You’re treated to an opening depicting the history of Water Falls High School, where you have recently transferred to, explaining how two genius students managed to do all these incredible things and went on to create world peace. The school, however, is now a total dive with kids going missing and the only classes on your timetable being P.E. or study hall. Lose P.E. and it’s my kind of timetable.

We’re then introduced to some of the supporting characters which is what I need to talk about first. Daryl himself is the non-speaking protagonist and is probably one of the most irritating protagonists I’ve ever played as. The permanent glaikit expression and willingness to be bossed around by his so called “friends” (who amount to nothing more than bullies to be honest) just left me with an incredibly annoyed feeling. Even after minor characters saying they’re bad news and not to do as they say, I’m then forced to do as they say and go on random fetch quests. It got a little tiring. It also may have something to do with Daryl reminding me of Napoleon Dynamite which I personally just can’t let go.

The quests you’re put on start of relatively small, the first being to find a piece of paper and some flowers, easy enough considering you’re told exactly where to find them. After that the quests get so convoluted and long that you can easily lose track, and to be honest a bit of interest, while attempting to finishing them. For me the reason it was so difficult to properly enjoy the insanity of these quests is down to the travelling. There’s not any proper type of fast travelling in Super Daryl Deluxe, meaning that if you have gone through a dozen rooms to pick up a quest item and have to report back to the quest giver, then you’re going back the way you came, through all of those screens. It’s a drawn out process made longer by the fact that enemies will respawn in each area when making your way back through them. Around the halfway point you unlock the ability to use, what are referred to as, ‘Ghost Doors’. These are doors that will drop you into random parts of each area, usually not the most useful of areas, to save you travelling to an area via the school. Like I say it’s not a proper fast travel where you can drop into any room but having it available earlier would have been preferred.

The main story itself is packed with the most insane randomly connected stuff that it can feel a little overwhelming, and can be hard to keep track of at times. One main quest in particular is asking you to collect a mobile phone from the history room, which contains a portal, as do all the classrooms, to a historical period. Here you meet Napoleon who is needing help against gremlins and Egyptian Anubis warriors who he is at war with. Fair enough so far, however, he wants to join forces with Julius Caesar, who is hiding from Genghis Khan who wants your help to get to Caesar and once that’s all rectified you need to find Cleopatra otherwise Caesar won’t help. That’s not even the end of the quest but it’s a little head spinning.

I know that main quests evolve and go off on tangents but they can last so long, especially when you’re travelling back to the starting point of a quest and going through screens of either nothing at all or being attacked by waves of enemies. It’s a drawn out process if you just want to finish.

On the plus side if you end up getting a bit bored of the main story there are plenty of side quests to keep you amused that introduce you to other students or famous faces from history/film/sport etc. I’ve taken Einstein on a trip through various portals to see the world, helped Babe Ruth with baseball cards, united the previously mentioned Napoleon, Cleopatra, Genghis Khan and Julius Caesar, and met Gene Wilder’s and Marty Feldman’s Dr Frankenstein and Igor. You can feel a bit forced into doing these side missions, though, as each new area will put you against enemies who will always be a few levels, in one case 8 levels, higher than Daryl. Again this is standard but you always have the option of grinding some of those levels to attempt to put you ahead. It just feels like an unnecessary difficulty spike for each new level where level grinding feels unavoidable and can detract from properly enjoying the game. I’d stick with the side quests as they’re always more interesting than grinding levels.

The combat is extremely simple to use and level up. You unlock certain moves that can be mapped to the face buttons and the right shoulder button. Unlocking these moves requires textbooks which are a limited commodity in Water Falls High and can be bought from the Trenchcoat gang or found on various levels.

Each move does a certain action like stun, melee etc. and can be combined with other moves to create a combo. Each move also has a cool down time, but if you can match up certain move you can create a pretty epic combo that can wipe out enemies in an instant. The same combo won’t work through the whole game as you can only level up each move to a certain level forcing you to think of new and inventive ways to take out your foes when new moves become available to you.

Levelling up each move requires experience points that you’ll gain from killing enemies, along with money and special items that can be used in side quests or for making new equippable items to bulk up your stats. A hat tip to the artwork for Super Daryl Deluxe as it’s pretty damn good. The hand drawn cartoon feel gives it a lot of charm, with the running animation for Daryl in particular giving me old school Scooby Doo nostalgia feels. Super Daryl Deluxe is not without its problems. Length of quests and lack of a fast travel can be classed at annoyances, but you persevere with these things. It’s an RPG so you need to expect to put a lot of time into it. Mentioning the amount of time you’ll spend on Super Daryl Deluxe leads me to my first issue; no auto saves. If you’re pushing through a main story quest, maybe grind some levels along the way, cash in on a side quest along the way perhaps, this might take a bit of time. Imagine the heartache of doing all this only to be overwhelmed by a horde of enemies and taken out only to realise that there is no auto save, all that progress gone in a flash and all you’re left with is the ghostly image of Daryl making his way up to heaven to meet the big yin in the sky, complete with wings and halo.

For a game the size of Super Daryl Deluxe I would’ve expected an auto save but that is not to be. Maybe I’m expecting too much as other games lack this feature but I learned pretty damn quickly to save often! I should mention that the save point is found in the bathroom and you’ll come across outdoor toilets on your travels, usually before a boss or at the start of a new area.

I unfortunately came across a bug where I would be unable to move through different menu options, freezing solely on the equipment menu, and this happened a lot. There were a few ways I found to sort it which was leaving it and hope it sorts itself, which it does eventually only to get stuck again, hold the main button to bring up a mini radial menu and choose whatever you’re looking for that way or, if neither option worked, which happened more often that not, close the game entirely and restart. Although there is potential a day one patch could be released that sorts this. We’ll just have to wait and see.

My main issue with this is that the map option is essential considering how big each area can get and how lost you will become. If you’re reading this thinking about how good your sense of direction is then Super Daryl Deluxe will be seriously putting that to the test. Trust me, you’re gonna get lost.

You’re getting exactly what you expect from an RPG style game with Super Daryl Deluxe, a story full of twists, enemies and bosses that will test you to the limit and a host of random, and sometimes insane NPCs. Even if some of them come across like utter bams. If you’re an RPG fan it’s definitely worth giving a go as it has everything you’re going to want, and figuring out what combos work against the number of different enemies you’ll encounter is surprisingly fun.

Super Daryl Deluxe isn’t that bad a game. You’ll face the classic trope of the RPG difficulty spike in each new area and maybe a menu bug along the way but for the RPG fans among you it has plenty for you to do and see that you’ll spending a fair amount with Daryl and a host of familiar faces.