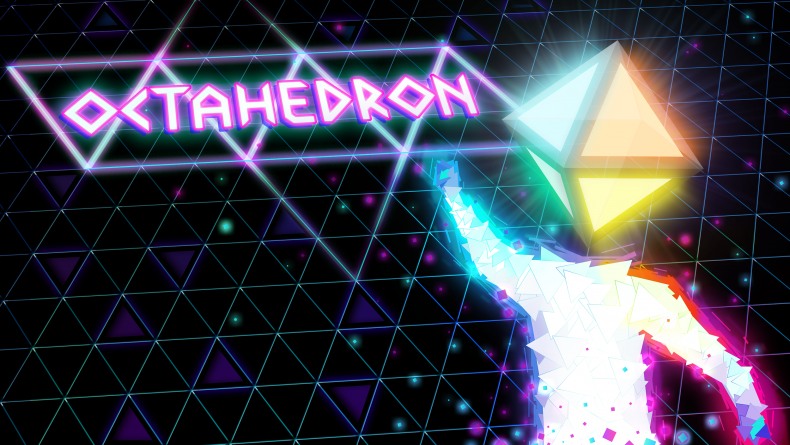 Good games evolve from simple concepts; the Mario games for instance started from running and jumping on a 2D plain, and they were good back in two dimensions, but since Nintendo added the third they soared. 2D platformers still thrive, but to really shine they need to showcase some sort of evolution. Super Meat Boy does this by tasking you with avoiding death traps at speed, while Braid gave us a rewind mechanic. Here in Octahedron you have to fill in the gaps by creating the platforms yourself.

To give the action some context, there’s a man in the woods and one night he sees something going on in the distance, so, he heads towards it; as you do when you’re alone in the woods. What’s there is not of this world, and as is par for the course in media when people encounter weird objects all alone, he touches it. This action turns his head into an octahedron, and he gets dragged into a world of garish colours, synth beats and a whole bunch of stuff that wants to hurt him. Yes it’s just plain odd, and no it doesn’t really matter, at the end of the day you’re moving from left to right, gradually moving up and down in the hope of reaching the goal and the next level; maybe that’s all the context actually needed. Platforms are spaced sparsely throughout the levels, and it’s up to you to use your ability to make extra platforms creatively to navigate the levels. You get a set amount of them to use with one being the lowest but you can get as many as fifty, and you spawn them underneath you by pressing R2 after you jump, if you hold the button down while holding a direction you want to travel the platform can carry you a certain distance before it fades out of existence. After completing the first world you get a second platform which projects an image of itself downwards, further world clearances then upgrade this further. The thing is, while the game is ok in worlds one and two, it’s from world three that things start picking up.

For the first two worlds it does seem like there’s only so far that traversing, avoiding enemies and making platforms can carry the game. During world two you find bounce pads that fling your secondary platform up into the air, but in world three for instance there’s a level that gives you a one platform limitation, but you can collect plus symbols to temporarily expand your ability to generate, and when the idea of that and the bounce pads is combined it literally starts to take off. It’s just a shame it takes that long for this feeling to arrive. Games like this can frustrate immensely, but it’s rarely the game’s design that does it to you; a missed jump followed by an enemy bump can lead you to rush a little too much, especially when the music has managed to draw you into the game’s rhythm. This sudden emphasis on speed on the side of the player can result in you making avoidable mistakes and as a result that frustration builds until you just can’t take any more. What I ended up finding is that if I went away and played something else for just ten minutes then going back I’d find myself much more able to adjust to what I needed to do, and I managed to finish sections that were making me red with rage.

Whether it’s enemies that spawn if you create a few platforms, ones that fire pulsing bullets at you for every form you create, or pillars that extend out from the walls as you pass them, the game wants to kill you in every way it can, and as a result making an error really can be heartbreaking, but rest assured the problem is with you, not the game. For instance, I kept dying due to tunnels that suck your platforms into them. I kept trying to travel in the opposite direction to how the tunnel was dragging, meaning I kept falling into a bunch of enemies below; this was down to my inability to grasp the fact I couldn’t travel in the drag zone, and required a change of thought on my part. As a child born of the 80s, the aesthetic should really resonate with me, but it doesn’t. While the colours are bright they’re sort of hidden behind a gritty VHS kind of filter, and on many occasions it’s hard to differentiate things that can hurt you from background detail; in a game that can cause you to get frustrated at yourself you don’t really want a game that makes you frustrated at it as well. A more positive aspect of the 80s influence the game exudes is the synth-wave soundtrack evoking many a TV show from my childhood. You can get carried away with the beat, but as good as it is, try not to, slowing down and using your head is a better path to success than a quick tempo.

Octahedron makes some missteps, but it’s still a very good addition to the twitch platform genre. You’ll frequently have to adjust how your mind wants you to play, and unusually for a game of this type it can help to step away for a period during play; if you’re the type of gamer who has been known to break a control pad you should take heed of that advice if you’re playing this, your peripherals will thank you. The aesthetic won’t be for everyone, but in a time where Stranger Things is a televisual hit, and videos like Kung Fury are going viral on the World Wide Web, this stands out with them. Just bear with it, it’ll grow on you.

Garish looks
It can feel unfair

Octahedron can take a while to click, but once you’re past the early stages and get over the denial of your abilities it really surprises with its inventiveness.