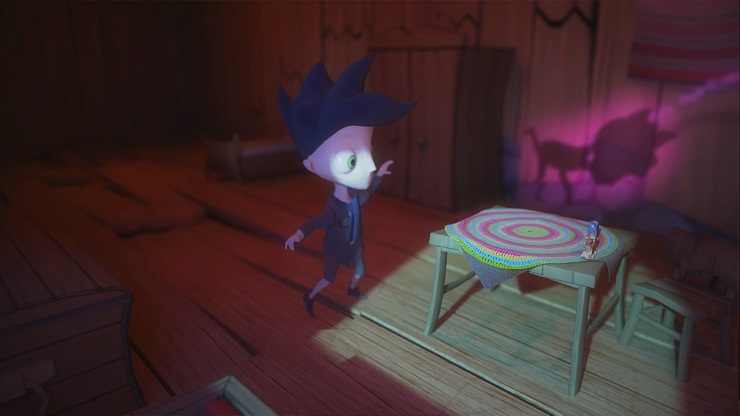 Shadow Puppeteer follows the standard bad guy routine, where the antagonist has decided to steal everyone’s shadow and only your character, the boy, has managed to escape such a fate. So his task becomes clear, to rid the land of the evil shadow stealing organ grinder and save the day. From then on you or you and a friend will control the boy and his shadow in various trials and puzzles involving both the 2D and 3D space you inhabit. Imagine a hybrid of Super Mario 3D Land and Super Mario Bros and you’ll get the general idea.

The boy can create shadows for his flatter self to walk on, and the shadow lad can assist with puzzles that require items to be manipulated in both the shadow and real world at the same time. The old Wii game Lost Winds springs to mind as something that used a similar dual character mechanic in order to complete areas. Brothers: A Tale of Two Sons shared something similar, but was focused on a single player. It was very novel to see it employed again, right up until I tried to play it. Shadow Puppeteer suffers from a confusing control system that forces you to rewire your brain on a continual basis in order to progress. It takes a large amount of discipline to get used to and become competent with the controls. Movement for both characters is via the control sticks, with jump and action assigned to the shoulder buttons. You spend half your time remembering which stick controls which boy most of the time simply because both characters are going to regularly interchange which side of the screen they are on. It is initially very frustrating, and that quickly progresses into annoyance, followed by resignation, then acceptance. You almost yearn to be using a Wiimote and Nunchuck to provide the necessary separate controls.

Sarepta should have pushed the two player mode over the single experience and perhaps even considered co-op mode to be the default, as this is when Shadow Puppeteer not only makes sense in terms of controls, but also starts to shine a bit. The irritation is more like a mere grain of sand inside an oyster and it’s easy to see the beginnings of a potential pearl. The levels flow quickly and decisions can be made more rapidly. You’ll certainly feel like your shadow partner is more of its own entity rather than the poorer staccato experience of the single player game. It changes the focus to continuous cooperation and is therefore the better for it.

The introduction cutscenes look like they were collected off the floor of the editing suite from A Nightmare Before Christmas. While presentable, they don’t really hit the levels of polish you would expect from Nintendo’s machine and they look quite aged compared to when they were produced. Eighteen months really is a long time in game design. The lighting works extremely well when you are interacting with the glowing globes or moving around a crate to create a platform for your shadow, so every puzzle has a logical and sometimes obvious solution. Sarepta have obviously put a lot of effort into how that works and it is to be applauded. But there has been a lot of thought put into the levels themselves, especially with the puzzles. Some are extremely straightforward, only requiring the moving of a platform to create a bridge for your shadow companion, but others require you to work together in tandem, or at speed – and again, at those points, those solo players are going to hit a large difficulty curve. Some of the levels are eerie and dark to increase the levels of atmosphere, but you’ll find nothing spellbinding or beautiful, just environmental furniture to set up the next set of puzzles. At the same time, the levels aren’t poorly designed, you’re just very aware you are playing a game rather than being involved in a story. Likewise, the sound design is nothing special, but serves its purpose without cementing any atmosphere as you play through the levels. You won’t get goosebumps, but you won’t mute the TV either.

You’ll get through Shadow Puppeteer in around four hours and your experience will depend entirely on whether you play through alone or with a shadow buddy in tow. Those who tackle the game with a friend are going to find Shadow Puppeteer to be a charming, clever, and quick flowing puzzle game that uses its core mechanic to great effect. Those who want to go it alone will find its stop and start experience frustrating and off-putting, but this was never the intention and would be unfair to criticise for playing it how it wasn’t designed to be played.

The puzzles are fun, it could benefit from some polish in terms of presentation, but you'll enjoy Shadow Puppeteer more with a second player by your side.