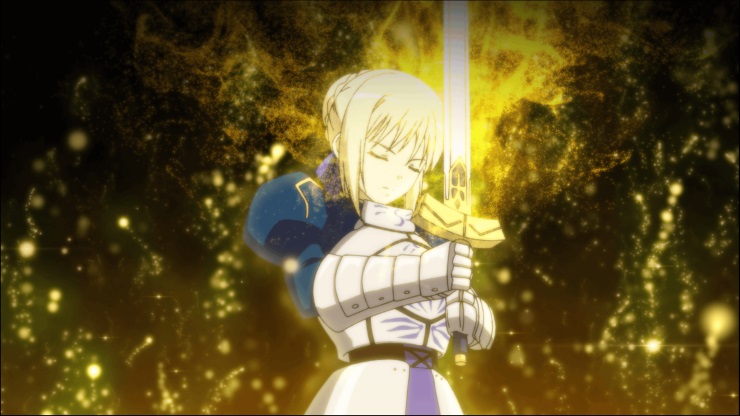 A few years ago the only fighting game franchise I cared about was Mortal Kombat. Today that isn’t even in my top three and I’ve discovered some great games like Guilty Gear Xrd Sign and Persona 4 Arena Ultimax. In the last ten days, though, I’ve been spending my time between The Witness and Nitroplus Blasterz: Heroines Infinite Duel, two games that couldn’t be more disparate, yet the latter has become one of my addictions. It has grown on me so much that I just get in, play a couple of games, and boot up something else when I’m free.

Nothing makes or breaks a fighting game more than its cast and mechanics. This one has an all female cast (as the name suggests) from the Nitroplus visual novels and other media involving the same writers. This brings us a very eclectic cast ranging from my favourite: Saber from Fate/Zero, and the Fate series to Saya from the visual novel Saya no Uta. There are twelve playable characters and many more support characters. Each player can have two support characters along with their main character in a battle. The support mechanic is really interesting as it allows for unexpected twists in combat thanks to the diversified support options. You can set up your support to freeze the screen or shoot a series of missiles into your opponent as you prepare to unleash your ultimate lethal blaze. Each support character has her own voice actress with dialogue in the story and battles as well.

Controls are a bit different to what I was used to and there’s a heavy reliance on quarter circle movement for executing special attacks. Guilty Gear Xrd Sign got me used to some complicated combos through various button combinations so I didn’t have too much trouble here. What really made this one stick with me was how varied each heroine’s special attacks and standard moves are. On booting it up for the first time I spent a few hours playing story mode as Saber but switching to Super Sonico completely changed my playstyle. Lethal Blazes are super moves and they use up three bars of the super bar. These are accompanied by anime cutscenes that are really great and serve as appropriate finishing moves. The cutscenes reference the media said heroine was from so Saber gets into Fate/Zero mode with Excalibur and has the same dialogue making the whole spectacle a badass experience. Most fighting games these days are too pro focussed so I appreciate the simplicity in Nitroplus being there when you need it. It lets you get as complex as you want or just button mash if you aren’t into fighting games. Speaking of not being into fighting games, there’s no tutorial mode so the only way you can actually learn is by playing against the CPU or going into a free training mode and looking at the move list.

I did come in expecting a good story thanks to the pedigree of the characters but came away disappointed. The main story mode is basically an arcade mode with a bit of dialogue before each battle. Once you clear this, you unlock “After Story” which is more of a visual novel with a lot of dialogue split up into ten chapters. This is the actual story content and it still failed to impress me. Visually, Nitroplus is good but inconsistent. Many elements appear to be blurry while others look great. The anime cutscenes during lethal blazes are great and character sprites look very nice. Even the portraits in story mode are really well done. I wish more effort was put into polishing the visuals because it is pretty jarring seeing closeups where the characters are blurry. One of the annoying issues I faced on the PS4 was the amount of times screenshot taking was blocked. Thanks to this, there are times where I saw five notifications within a span of ten seconds indicating when I could and couldn’t take screenshots or record gameplay.

My experience with the online network mode ranged from a lot of fun to frustrating. Some games were plagued with lag while others were great. I do appreciate the ability to play against people on both PS3 and PS4 across the globe, where some other games will lock you into your own region for online play. There are various filters you can use to tweak the online search for the ideal experience you’re looking for.

If you’re a fan of fighting games that don’t take themselves too seriously and enjoy anime or just the franchises these ladies are from, Nitroplus Blasterz: Heroines Infinite Duel will not disappoint you. They even have a really catchy opening song featuring Super Sonico. Job done.

Story is lackluster.
Some lag in online games.
No tutorial mode.

An interesting fighting game that has a few flaws, but otherwise held my attention enough to keep going back to it for random matches online, or trying out the varied cast of fighters.