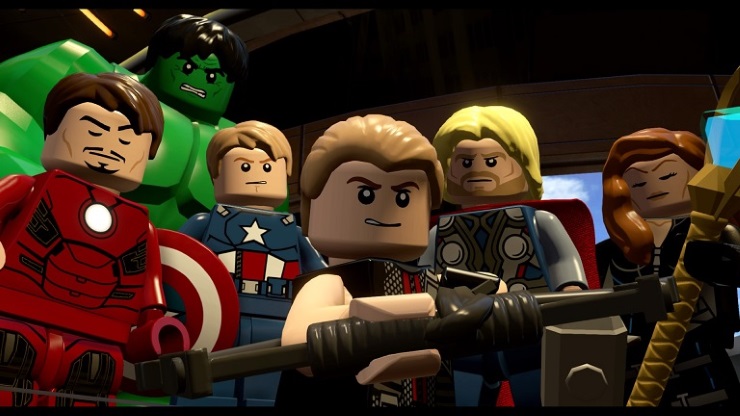 “I can do this all day,” claims Captain America, his familiar First Avenger line having no place of context outside of a non combat situation, one of which I am in when he feels the need to say this. We are stationed at Barton’s Farm, a hub area during the Age of Ultron storyline, and Cap has no threats around him, no enemies to fight, in fact he hasn’t moved from his spot, where he is stood staring at the sunset, for five minutes. This is just one example of how the official dialogue in this LEGO entry doesn’t always work to the games advantage. For cutscenes, yes, the dialogue is perfect, but during actual gameplay, the random outbursts from characters don’t always make sense, resulting in them looking stupid and you wishing that the grumbles and mumbles of the first LEGO games still existed. I don’t think they should never of added voices in the first place, but that’s a discussion for another day.

LEGO Marvel’s Avengers is a yellow brick compilation of the Marvel universe, the main missions coming from the two Avengers films, with Iron Man 3, both Captain America films, and Thor: The Dark World also providing levels. As usual, the adaptation and construction of the films playable scenarios is fantastic, each level providing enough variation in gameplay, from puzzles to combat, to keep you engrossed. The combat is particularly good this time around, the ability to team up characters for special moves adding more interesting ways to take opponents down. Combining Black Widow and Quicksilver is a personal favourite of mine, any enemies in the circumference of them being obliterated by the quick whirlwind of bullets that their pairing creates.

The game time for each main character is another positive, my moments with each of the Avengers heroes being well balanced and fairly distributed. The final act of Age of Ultron does this particularly well, the chaos of the films final scene being broken into small, playable chunks, your time with the hero’s divided fairly. As usual, there’s lots of replayability, each level asking you to go into Free Play mode with other characters in order to fully complete it and, as usual, you’ll find yourself happily obliging, the “must collect everything” ethos that drives these games pushing players to carry on long after the stories are over, which is rather quickly.

In total, it took me fifteen hours to finish the story missions, which doesn’t seem bad for a LEGO game. But you have to bare in mind that there’s six films worth of content here, the one level film stories outside of the Avengers feeling more like easy add-on content than well thought out mini-games. The truth is there’s too much content, which seems like a ridiculous thing to say, but here this sentiment rings true. If the developers and publishers had come to some sort of agreement to break this game into two releases, with each Avengers film perhaps being the flagship for the titles, the storytelling here might not have been as rushed as it is, a feeling of being hurried through the game prevalent throughout, especially during Avengers Assemble. There are a few occasions, where large narrative leaps from one to the next scene are obvious during the film storylines, and while these do not cause stories to be incomprehensible, they make for distorted viewing, which may cause some fans who have seen the films to be disappointed in the lack of story-line exploration. As much as I don’t play the LEGO games for their plot creations (mainly because most of their games narratives are already mapped out beforehand) they have proved before that they can tell a story well, the great memories of LEGO Harry Potter fading fast while playing this.

That isn’t to say I didn’t have fun while playing, my time never felt like a chore or a bore. I particularity liked the many hub worlds and the contrasts they offered to the linear action. From the sprawling landscape of Manhattan that encourages you to explore, to the idyllic beauty of Malibu, each hub world provides an interesting rest bite from the story-lines, side quests bringing with them many Marvel characters to meet, some of which you will get visibly excited about and some of which you may not even know. Then there’s the attentions to detail that you see, such as Coulson giving you the wink when you think he’s dead, with the usual LEGO humour providing the laughs, the concoction of the serious nature of the Avengers and slapstick LEGO comedy being an entertaining mix.

With LEGO Star Wars: The Force Awakens recently being announced, it makes sense that TT would want to leave the Marvel world behind for a while, their concentrations lying elsewhere. However, this game really could have done with a less is more approach, the decision to cram everything into one game meaning that quality is sacrificed in places. For avid fans, this will make a nice addition to the collection, the ultimate Marvel experience being brought about by the sheer amount of characters to unlock, replayability, and the quest for 100% ensuring that players pick this game up time and time again. For anyone else however, Marvel Super Heroes is still the best game to pick up when looking for a LEGO superhero fix, Marvel’s Avengers falling short of its predecessor in the style over substance stakes.

Dialogue is unnecessary in places.
Stories are rushed.
Too much content crammed into one game.

The light-hearted fun gameplay is still prevalent here and while the game has many good points, the disappointments within LEGO Marvel's Avengers means it never really live up to its potential.