previous
The Legend of Korra Review
random
next
How to Survive: Storm Warning Edition Review
0 likes 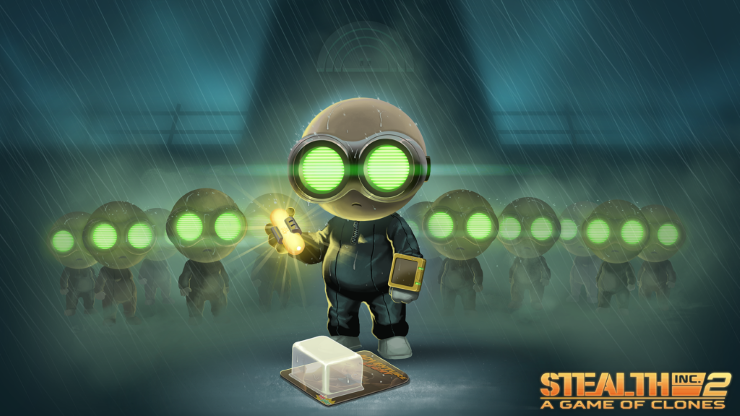 Making a sequel to a game with a level editor always strikes me as a daunting task. It’s the sort of statement that says ‘yeah, we’ve got a big idea. We’ve got an idea so big that a mere level editor can’t handle it’.

This is the main concern that lingers over Stealth Inc 2: A Game of Clones, the Wii U Exclusive sequel to Stealth Inc: A Clone in the Dark (or Stealth Bastard, if you want to go back that far). The previous title was a puzzle platformer built around precision and split second timing. Navigating traps and enemies while figuring out how each level reacts to your actions was the first step, and the next was devising a method to zip around levels, skimming each danger by your tippy toes in order to snag the highest grade and top the time trial leaderboards. It was like a series of mouse traps, only you were the mouse and you wanted to survive. It was like a sort of Meat Boy in the shadows.

A Game of Clones follows this template, albeit with a few key alterations. The most obvious change comes in the form of progression. In the original Stealth Inc, levels were simply selected via a menu, but in Stealth Inc 2 you must locate each test chamber by navigating an interconnected HUB world. Once found, challenges can be played at any time from a menu.

This is an interesting tweak, and it works well for narrative. It’s no great tale but Curve Studios are able to flex the natterings of the irritated jobsworth that’s putting you through the tests in less pressured environments, building up his aggravation as you survive time and again. It also adds new goals to Stealth Inc 2 – the HUB is filled with cosmetic collectibles and secret test chambers that require extra legwork and gadgets to ferret out. And that’s the other major change: gadgets have a more prominent role. The HUB’s interesting, then, but it can sometimes be a mite infuriating. As there’s no time pressure Curve have taken the opportunity to fill it with some particularly tricky and occasionally obtuse puzzles. Chances are these will be less aggravating when the room specific Miiverse posts are active following launch, but there were a few moments of bemusement during my play through. For many, these moments may cause the hub to feel like a needless speed bump in between the perfectly pitched test chambers, but that could speak to the quality of the chambers as much as the irritation of the HUB.

Inside test chambers the game is largely business as usual, though Stealth Inc 2 puts a larger emphasis on gadgets than its predecessor with each zone of the facility featuring tests themed around a particular piece of equipment.

This leads to a greater variety of puzzles. Just as you’re used to employing the place-it-yourself platform, Stealth Inc 2 swaps it for a way to mind-control the enemies. Then as that’s sinking in you’ll find it gone, wielding the ability to clone yourself instead, which leads to some of the messiest platforming ever (meant in the ‘so much blood’ sense, not the ‘it’s rubbish’ one). The gadgets are entertaining, and adjusting tactics to accommodate them keeps puzzles fresh. It also keeps the time trial challenge interesting, asking you to explore each unique trick the tools have to optimise runs. Once you finish a zone you can then use that gadget freely in the hub to help you find the plethora of additional content.

You can even play the game co-operatively if you wish, with one player on the GamePad and another on the TV. This process divides tasks between players, with the TV player doing the basic clone stuff while the GamePad user takes over gadget placement and use, along with providing additional help via unique abilities and doodles. It doesn’t use unique levels, but it’s telling that co-op leaderboards are listed separately to solo – a well co-ordinated team will have accuracy and capabilities beyond a solo player, while minor alterations to levels (the GamePad player must highlight newly hidden enemies and input codes for terminals) make it a notably different and unique experience you’d only find on the Wii U. Ultimately, the test chambers are too good to let the HUB affect the overall experience too much and, on balance, I largely enjoyed exploring the facility, even if its implementation is slightly undercooked. The puzzling, and the search for S-ranks, fast times, and hidden clones remains too strong and is likely to effortlessly push my playtime in excess of twenty hours, and that’s before creating my own levels or exploring those of the community (you can share custom levels freely, and the level editor is as powerful as ever).

Stealth Inc 2: A Game of Clones has big ideas, then. Between its HUB world, focused gadget implementation, and unique Wii U co-op, it’s a game with enough to ensure it escapes any sort of criticism for just being a texture pack. While the ideas aren’t all perfect, it’s still a marvellous and unique precision puzzle platformer when it focuses its ideas.

Test Chambers are as fiendish and fun as ever.
Gadgets are varied and interesting
Good use of Wii U features in Co-op and Miiverse functions.

HUB world can feel superfluous.
Co-op takes a while to become interesting.

Stealth Inc 2 takes brave steps to expand the formula and, despite a few stumbles, succeeds in sculpting a more varied precision puzzle platformer.