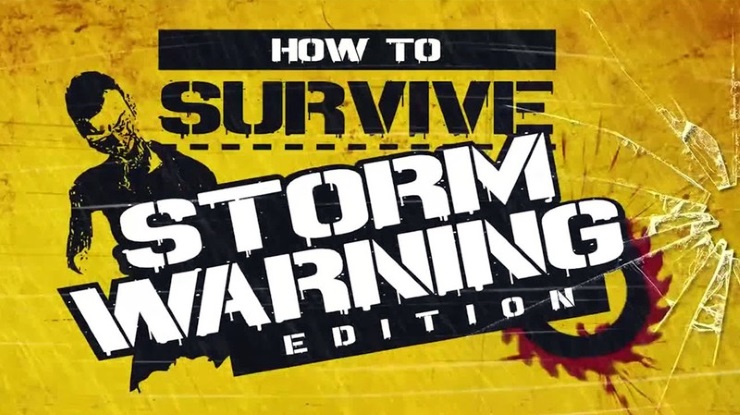 Eko Software’s isometric zombie-survival-horror How to Survive hit Xbox LIVE around this time last year. Set on a series of uncharted islands, it tasked you with no greater challenge than to survive: find or make a worthy vehicle and escape along with anyone else you could save. Aided by manuals (from which the title is derived) written by a long-time survivor named Kovac, the onus was on gathering supplies by day and digging in at night when the islands’ more aggressive inhabitants come alive.

A mixture of B-movie shtick, top-down action and resource gathering, H2S scratched an itch we didn’t know we had, but a lack of variety and some serious technical issues held it back. Still, this wasn’t enough to deter Eko, who released several DLC packs over the following twelve months, including new modes and a new character. This has all been bundled into the new Storm Warning Edition for Xbox One and PS4. Initially, you only had three survivors to choose from: Abby, Jack and Kenji – all with identical skill-sets and one unique ability such as the option to craft fire arrows or a kick-ass crossbow. Now there’s also Nina, a military veteran with some serious melee skills. While she doesn’t bring anything new in, she evens out the line-up and, well, more variety is always welcome. There’s also a fifth island included, giving you somewhere new to explore if you were getting tired of the same old sights.

More interesting are the new modes. One-Shot Escape is exactly what you think it is, so gives you a single life to get off the island. This is ridiculously tough, especially as you start with nothing, but the roguelike nature will appeal to those who really crave a challenge. Barricade mode, on the other hand, wants you to do the opposite. You must dig in and defend your camp, including the injured Henry and the doctor treating him, by harvesting gear and creating barricades, rudimentary turrets and traps. It’s not easy to find supplies, and the day/night cycle lasts mere minutes, meaning if you stray too far and find yourself stranded at night, it’s probably game over. This mode is the best new addition, feeling similar to Undead Labs’ State of Decay in terms of urgency. There’s also a new difficulty mode, if you really want to make yourself suffer.

There’s a real sense of tension and desperation when the going gets rough, when you’re looking for a place to sleep or you’re starving to death or dehydrating – these real world problems added to the growing threat of the undead horde create an atmosphere of barely-suppressed panic that’s hard to find in any other game of such a relatively small scale. Sadly, the technical gremlins that made the original such a glitchy experience are still present on next-gen consoles. Character animations lack fluidity, there’s no sense of impact to your physical blows, and gunplay is still imprecise. The vaunted graphical upgrade isn’t that noticeable, and the bland colour scheme has barely been tweaked. The extra modes and included DLC make this the undisputed definitive edition, but it would have been nice to see more of an improvement in visuals and performance.

How to Survive: Storm Warning Edition is a fun challenge when played alone, and a blast with a friend, but Eko really should have put more effort into re-polishing it for the next-gen release. Still as addictive as ever, and the extra modes – Barricade in particular – are such comfortable fits that its surprising they weren’t always there, but it’s still a way from perfect. Of course, that’s not really the point, as there’s still nothing else like it on Xbox One or PS4.

Read our review of the original game here.

It's still fun and unique, but for a definitive edition, it's still lacking polished.