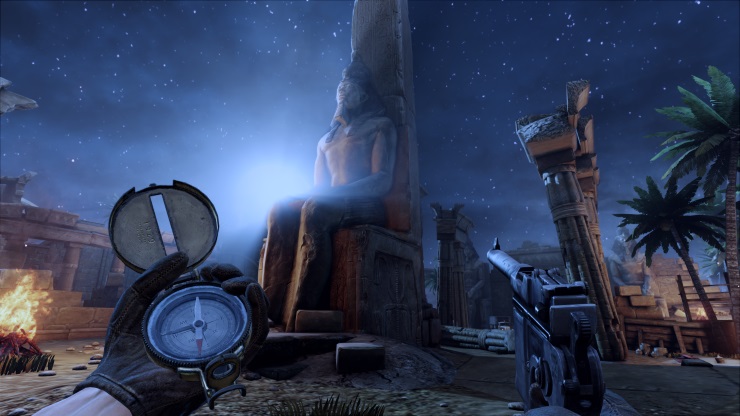 Most games we play are derivative to some degree. But to say Deadfall pinches a few ideas from Naughty Dog’s legendary Uncharted franchise is an understatement. Where Nathan Drake’s adventures borrowed the best bits from the likes of Indiana Jones and married them to the very best in third person adventuring, Deadfall Adventures is a more traditional first person shooter that, whilst fun and admirably well engineered for the budget market, falls way short of delivering the kind of cinematic bombast we now come to expect from the wise-cracking adventurer scenario. It is far from being a full-on fridge-nuke, however, and has its moments.

You take on the role of James Lee Quartermain, grandson of the legendary treasure hunter Allan, on a quest to unlock the secrets of the legendary lost city of Atlantis. Naturally, your enemies along the way include some Nazis. But there are also some other little double cross scenarios (Russians!), and some fantastical monsters to contend with – like mummies. The gameplay is a standard puzzle-solving FPS, with a handy hint system in place in the form of your grandad’s notebook, which provides little sketches that help you negotiate the various booby traps and archaeological brain teasers. From the outset you can select your difficulty, with an interesting option to vary how hard the game will come at you both from a combat point of view or in terms of how mind-boggling the puzzle sections will be. Most of the action involves pumping lead into a variety of foes but there are some novel scenarios, like the fact creepy mummies are immune to your bullets, until you use the specially crafted Atlantis Gold-forged torch in your possession to weaken their bandaged asses.

Things are given a modern FPS spin by the inclusion of a levelling up system which allows you to upgrade your skills in three different categories. The Path of Light boosts your attacking prowess, the Path of Life your energy bar and stamina, with the Path of Life focusing on your handiness with weapons, improving things like recoil (some of the ancient guns are a tad rickety) and rate of fire. You can access these upgrades by searching the environments for different coloured treasures which can then be used to spend on power-ups.

The action takes you to a number of locations, beginning in Egypt and eventually visiting far flung destinations like the Arctic Circle. It is a pretty good looking game, which does a fine job of recreating not only some recognisable environments but also some real historic 1930s weaponry with plenty of old school guns that will be instantly familiar to the firearm nuts amongst you. The main adventure is joined by an impressive survival mode, which pits you against waves after wave of enemies, with different map types adding different sets of rules to proceedings. It is great fun and can also be played online. The multiplayer was pretty sparsely populated at time of writing but appears to be a fairly standard affair, with an XP-style points system in place to raise the rank of your profile and unlock new and more diverse weaponry.

Deadfall Aventures; Heart of Atlantis does not reinvent the wheel. The story is a mish-mash of instantly recognisable boys-own adventure tropes, culled wholesale from the adventures we have witnessed in games, literature and movies past. You wont remember much about the lesser Quartermain once the game is over, but you will enjoy the fun Survival mode which gives a bit of longevity and is terrific fun to play. You wont experience nail-biting, ridiculously entertaining set-pieces, but you will tip your hat to The Farm 51 for bothering to transport their PC concern to the PlayStation Store. Sometimes it is best to just ignore the retread elements, and just enjoy a good old Indy-style actioner.

Fun in places
Knows what it is

Hugely derivative
Not much new here

You wont remember much about the lesser Quartermain once the game is over, but you will enjoy the fun Survival mode which gives a bit of longevity and is terrific fun to play.