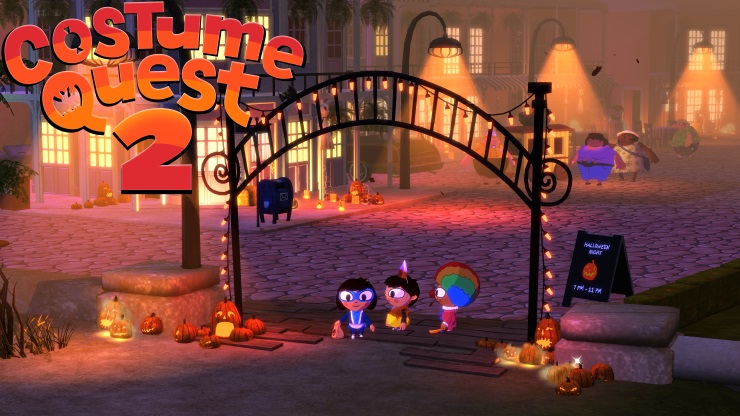 It’s a cutesy, fun premise: an evil dentist wants to bring an end to Halloween, and it’s up to two kids to stop him, armed only with the various costumes they find along the way. So begins Costume Quest 2, the first sequel by Double Fine, but what’s inside this nice shiny candy wrapper can at times feel like a trip to the dentist.

The plot is simple but fun. Having just returned from their adventures in the first game, twins Reynold and Wren stumble into a secret meeting between Dr Orel White and a time wizard and end up travelling back in time. Time-travel may be a cliché, but here it is handled incredibly well. Characters appear at various ages in the three locations: a bayou in the past, the present town, and the dentist-ruled future, but manage to remain consistent, while the plot doesn’t get overly confusing. Gameplay is similarly twee. Trick or Treating makes up a large part of the questing, knocking on houses to collect candy to pay an NPC for a useful item or some information, with the ever-present danger that behind the door may lurk an enemy. Other quests involve finding certain items, or convincing people to do certain things, like to go and watch a band play, for example, with your main objective always requiring you to complete a handful of side quests before it can be resolved.

You’re aided by the various costumes you find along the way, a typical array of Halloween dress-up that can be switched outside of combat by holding the right trigger. In the outer world some have special powers that aid exploration. The Clown’s horn moves alligators out of your path, while the Pterodactyl can blow piles of leaves out of your way – with some costumes required to progress the story, but others allowing you to access secret areas in previous levels. Combat is where costumes come into their own, though. Run into an enemy, either behind a door or on the road, and it will trigger a turn based battle. You see your party morph from their handmade costumes into giant versions of whatever they are, and it is pretty cool to see a Pharaoh, a wizard and werewolf fighting alongside each other. Each provides bonuses to health and attack, and come with special powers, like area of effect attacks or healing, as well as being strong or weak against two of the three enemy types: monster, technology and magic.

The system brings in a bit of much welcome strategy, not least because the combat itself is otherwise incredibly dull. Your three characters are each mapped to one of the face buttons, which you use to control them at all times, despite being turn based. Tap it once to select which power you wish to use (attack, flee, or special), and then again when an icon displays on the enemy. Do the latter at the right time and you’ll deal more damage, and later in the game perhaps allow for a follow up attack. Do this for each of your characters, block the enemy’s attack, rinse and repeat. It’s not challenging, and although special attacks liven things up a little, when you have used them once you’ll find yourself hammering the skip button to just make the battles end quicker. Opponents aren’t exactly clever either, ignoring your own weaknesses to strike randomly, and while enemy health bars increase, you base damage does at much the same rate.

Creepy Treat cards attempt to inject a bit of fun into the combat. These are special powers found in the world that you can equip and use in combat, but they’re unnecessary, just wasting a turn that could have been spent on a basic attack which would have had a better result. The grind of the combat is reinforced by the repetition of quests. Every area has you trick or treating, and Halloween-based as it may be, even the dialogue and models used behind doors are frequently repeated, as well as finding six hidden children and performing at least one fetch quest. The tracking quests are better, but these are only used twice.

The visuals do give Costume Quest 2 a neat personality, cute and loveable with a hint of darkness that Halloween deserves, and this being Double Fine there are a few jokes that will make you chuckle, but honestly, I can’t remember any specific examples except a running joke about Candy Corn, which gets older quicker than Jeremy Clarkson’s introductions of the Stig.

All in all then Costume Quest 2 may look appealing on the outside, but dull combat and repetitive quests mar a good storyline and some interesting ideas.

Like opening up a bag of Haribo to find a lone Murray mint.

Games with Gold for May revealed