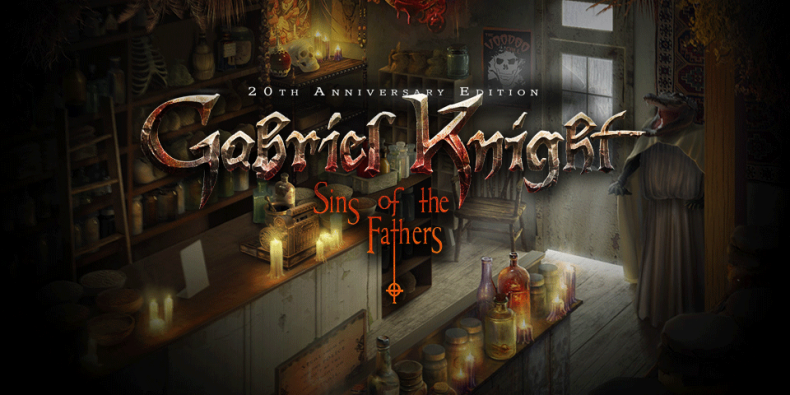 When Jane Jensen created the first Gabriel Knight game back in 1993, it was rather unique. Whereas most point and click games of the time were comedies or fantasy adventures, Sierra took a chance with Sins of the Fathers, a horror thriller, grounded thoroughly in the real world. Jensen offered up a gritty, historically-rich tale, which captured the imagination of gamers and later spawned two sequels.

It is no surprise then, that the game has received a high definition makeover. The current trend in adventure gaming seems to be for re-releasing and re-mastering genre classics, making them available both to long-time fans and to a whole new audience. This time thankfully, the original creative forces behind the game are behind the new version too, so at least the project was in good hands.

For those who don’t know the series, Gabriel Knight is a writer living in New Orleans. His murder-mystery fiction has never been a runaway success, so he lives and works out of St Georges’ books, the shop he owns. As he looks for inspiration for his latest novel in a series of Voodoo-related murders in the city, Gabriel becomes embroiled in the mystery himself, meeting many colourful friends and foes as a centuries-old battle between good and evil wages secretly in the Big Easy and across the world. The story is easily the strongest aspect of each entry in the Gabriel Knight series. A lot of historical and cultural research obviously went into producing a tale that is at once believable and fantastical. There is a deep level of back-story and colour throughout the adventure, making every element feel important. Because the world is so authentic, Sins of the Fathers is far more capable of producing real moments of suspense and terror than many other games.

A few new sequences and puzzles have been created for the Anniversary Edition, but these are all relatively minor and manage to blend in with the rest of the game perfectly. Sadly, a few lines of dialogue and actions remain that might have been better off left out of the game – as a slightly-sexist sequence and some cringe-worthy flirting could have been updated to make the experience a little more bearable. A nice touch that is accessible throughout play is the Star button. This provides gamers with a peek at concept artwork, notes and behind-the-scenes interviews that give a fascinating insight into both the original development of the game and the re-mastering process.

Structured across ten days, players won’t find themselves floundering as they often might in other point and click titles. Here, there are set objectives that Gabriel needs to complete each day – marked out in his journal – and none of the tasks are especially obtuse. Sins of the Fathers is pretty logical in its puzzle design on the whole (aside from a frustrating mime puzzle early on in proceedings), meaning that you won’t end up having to use the rancid fish with the slippery clown, or some other similar ridiculous puzzle solution. If you do get stuck, you won’t find yourself banging your head against a wall for long. The gameplay itself is also very intuitive. In a change from the original version, rather than having a list of eight or so actions that you can pick to use in each environment, a context-sensitive cursor has now been employed. Now when you click on an item, only the applicable actions will be available to you – rather than having to tediously try every single interaction until one finally works. The in-game journal also helps keep things streamlined. As well as listing objectives, as mentioned before, you can also re-read everything that Gabriel has so far discovered – which sometimes gives subtle hints on how to proceed. On top of that, a tiered hint system will give gentle help if requested.

The graphics have obviously been completely over-hauled for this re-mastered release. 2D pixel-based sprites are replaced with fully 3D character models and hand-painted backgrounds. Sadly, this isn’t entirely successful, as the animation is often a bit stiff, and the new backgrounds are somehow too colourful and lively – losing some of the grim tone that the original artwork had in spades. Maybe the art is now too polished, but it doesn’t feel as disturbing and seedy as the original art managed to.

The sound design also features the original music, entirely re-orchestrated by the original composer. This really helps add more ambience and emotion to almost every scene, and is very true to the initial recordings. The voiceover work in the original 1993 version featured famous names such as Tim Curry and Mark Hamill – but their performances were a bit hit and miss at times. Thankfully the new voices are mostly good, but the new voice of Gabriel is a bit patchy and doesn’t sell the Lothario character entirely well. Although Gabriel Knight: Sins of the Fathers is still a great story, with some really gripping sequences and a great cast of characters, the Anniversary Edition doesn’t really add much to the experience. The art is certainly one of the most contentious areas, and few will be convinced by the new style and the lack of atmosphere. Many gameplay tweaks and refinements make this edition a more functional and forgiving experience than its predecessor, however, which will give it greater accessibility to the modern gamer. The story it tells is still very capable of capturing the imagination and immersing players in the darker side of New Orleans.

A great way to bring a classic adventure game to a whole new audience.

Love: The Greatest Force in the World…and Gaming