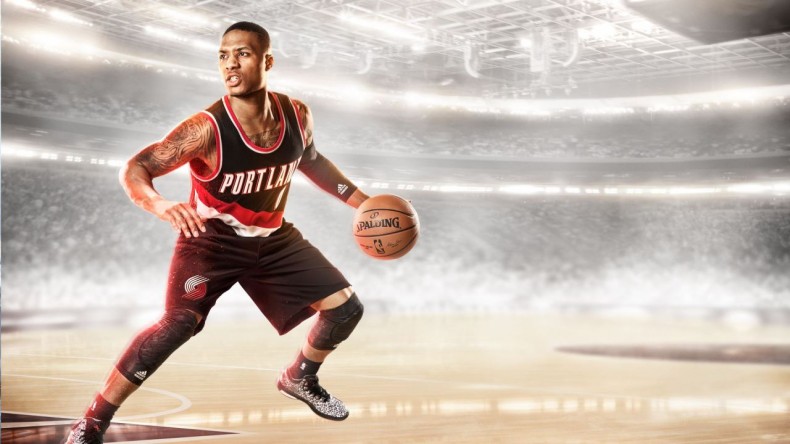 EA’s catalog of sports titles has been superb over recent years. FIFA has reigned supreme for what seems like forever, Madden – although uncontested – has always improved, and the addition of the UFC license boosts the portfolio significantly. But the biggest blemish on this impressive collection has for years been NBA Live. Last year’s attempt was awful to say the least, and sadly this year’s installment isn’t much better.

Once you get into a game, the most obvious improvement over Live 14 is purely aesthetic. Players no longer look like caricature versions of themselves, mainly thanks to face scanning of the majority of starting players from across the league. Player animations have also seen a slight improvement, but are still nowhere near perfect as some continue to trigger at highly unrealistic times. There are also issues with players moving at unnatural speed to enter an animation.

When on offense there is once again a number of issues. The most irritating (as was the case last year) is that shot timing is incredibly unnatural. Instead of releasing the shoot button at the top of the shooting arc (which the game even tells you to do in a loading screen!) you have to release it as you are bringing the ball up to even stand a chance of scoring a jumper. Yet again knocking down jump shots is overly difficult and inconsistent. A new system is in place that tells you if you made a good shot selection and how well timed your release was. While it offes useful information it has little purpose, as often an uncontested perfectly-timed shot will bounce off the rim while a poorly selected shot with awful timing will fly in. If you are looking for a slight positive here the only good news is that, although not great, the jump shots are easier to hit than last year, just not by much.

Elsewhere on offense your AI team mates are not up to scratch. You can force them to make movements by pressing L1, but even then they aren’t particularly amazing movements and getting any AI controlled team mate to contest an offensive rebound is near impossible. The poor movement becomes especially apparent when in Rising Star mode where you control a single player.

One of the nicest features NBA Live 15 adds is the ability to perform a pick and roll by simply holding L2. Once your team mate is in position you can squeeze past for a usually uncontested layup or dunk (which look much better this year). It doesn’t work all the time (in fact I would wager that half the time it doesn’t work out), but being so simple to perform means it quickly becomes one of the strongest moves in your arsenal. Freestyle passing also makes a return to the series: holding R1 and flicking the stick in the direction you want the ball to go in not only feels natural but also improves the fast break significantly. Defensively, not too much has changed. It appears to be easier to defend against simple dribbling moves, and shot blocking occurs slightly too often, which makes tall players a valuable commodity. On higher difficulty levels many baskets do feel unfair as the AI will sink shots you could only dream of thanks to the issues with shot release timings.

The on-court action is certainly better than last year but is still incredibly frustrating. Getting to the paint isn’t particularly easy thanks to solid defensive AI, but when you do it’s usually guaranteed points. Defensive play is passable but could be greatly improved.

Visually, the arenas and crowds look okay but aren’t great, and both animations and crowd members are frequently repeated. What does feel awesome, however, are the chants and atmosphere. Some crowds will become incredibly loud and sound quite real, even making it difficult to hear the sub-par commentary at times. On the game modes front we have the Ultimate Team mode that features in every EA sports title and will probably be the most played option in NBA Live 15. A welcome gift of 10 gold packs certainly made the mode more attractive to play and with a good team it is great fun, although playing with a bronze squad is much less enjoyable. The online auction house should make crafting a great team easy but at the time of writing very few gold players are on sale, and those that are usually cost a bomb. For anyone building a team, tall players will do incredibly well at both ends of the court.

The Rising Star mode sees you control a single player on a team throughout a career. It’s the typical fair for this game mode, but anyone hoping to play a point guard will become frustrated with the AI’s poor movement. That said, those longing to play the team manager across a season will be a fan of the passable Dynasty mode while online head-to-heads will offer the most balanced challenge, as you will both be on the same playing field. It’s also worth noting that the online infrastructure works fine, with no connection issues.

Thankfully NBA Live 15 is an improvement over the diabolical Live 14 but that doesn’t mean it’s perfect – in fact, it’s far from it. Scoring jump shots is still overly difficult, your team AI isn’t up to muster and tall players feel slightly overpowered. However, the pick and roll functionality combined with the freestyle passing can result in some great plays that, for the first time in years, make NBA Live fun to play.

A marked improvement over NBA Live 14, but still far from perfect.