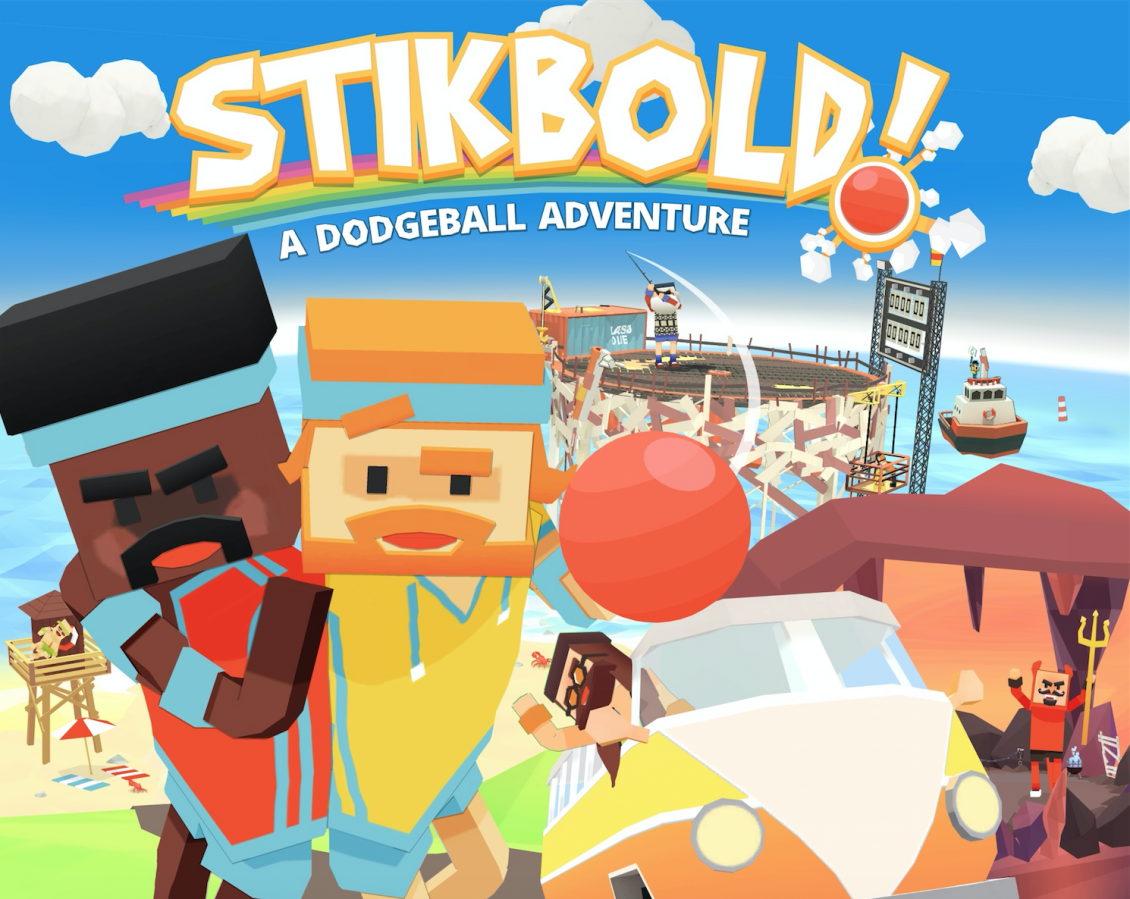 It’s a small wonder that it has taken so long for one of America’s biggest sports to get its own dedicated game. I mean there are probably some really, really shite ones from the early 2000s, but do they really count, especially considering just how big in popular culture dodgeball is? Can you think of one American kids’ cartoon that doesn’t feature their fat, balding, lonely gym teacher screaming at them while they play the game? Thought not. Danish studio Swing Games, however, have remedied the situation with Stikbold.

With the likes of IDARB, Sports Friends and Rocket League all becoming massively popular, it’s little surprise that other colourful games aim to take the beloved sport in a new direction. Although, Stikbold deviates from those three and many others by not being a competitive game at heart, as what’s presented front and centre when you reach the menu is the Story Mode. You play as the dodgeball team of Bjorn, the Bjorn Borg (who actually gets a credit) look-a-like, heart-on-his-sleeve, reckless and obnoxious lover boy and Jerome, the cool, calm and collected geezer. They lost the championship last year and the balding, aging coach is obsessing over them winning it back. Just as the final is about to be fought the opponents, last years champions and Bjorn’s love interest, are whisked away by the devil himself and thus begins the treacherous journey to retrieve them.

The story is very short, clocking in at around two hours and a half hours if you religiously complete every challenge, but it is certainly sweet. With chunky character models, bright colours and a nice sense of humour I couldn’t help but reminded of South Park characters Terrence and Philip. Also, the stories points of the importance of teamwork and winning isn’t everything are well conveyed.

There are twelve missions in the story mode, with the majority being straightforward dodgeball battles. But the pace is often switched up with boss battles that are all varied and quite tense fights. My favourite was the battle with “Moby Whale”, in which you have to push explosives into the beast’s mouth while throwing annoying whale activists into the cold, stormy sea. The happy music also changes slightly for each area and perfectly matches the tone and feeling for every place the pair go. The campaign can be played in couch co-op and there is a versus mode in which up to four people can either play against each other in different team combinations or in a free for all. But the lack of online capabilities will restrict down the number of opportunities for some to play with or against someone, which is a shame.

It’s doubly a shame because Stikbold is a blast to play and very simple to pick up. You run around the arenas, which range from the gym to the beach to actual Hell, and pick up balls or other projectiles automatically. Then it’s either R1 to pass to the team mate or R2 and the right stick to aim and power your throw. The only other mechanic is dodge, which is L2. It’s a set of mechanics that is really easy to learn and get used to, and then more complex moves are added to the same mechanics as you progress. Catching a ball by dodging into it and bending your shot are two skills you can pick up once the basics are down.

So despite being just a bit too short and lacking the online features to keep me playing long term, I thoroughly enjoyed my time with Stikbold. It’s a fun, fast action dodgeball game that, with a light-hearted and good-humoured story, makes for a cracking time.

A bit too short
No online capability

Stikbold finally gives the sport of dodgeball a credible representation in a video game. It nails the simplicity and mastery of the sport while remaining fun and humorous, but it lacks online capabilities and is just a bit too short.