This War of Mine: The Little Ones Review 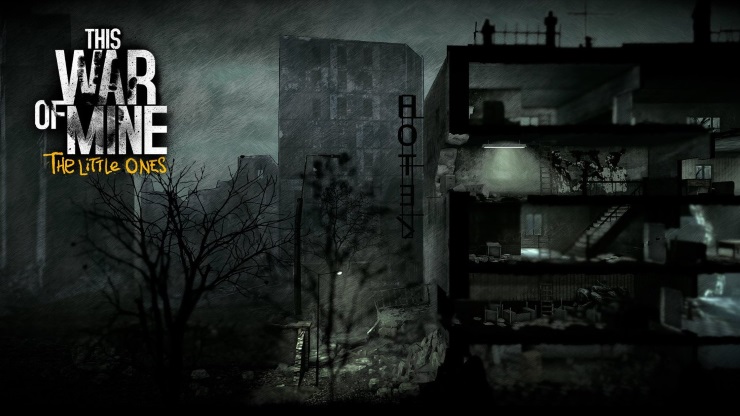 The time I spent playing This War of Mine was harrowing, uncomfortable, and deeply saddening. Being forced to make some of the toughest decisions I’ve ever had to make in a video game. I can’t really say it was particularly “fun” to play, nor was it easy, but it was an eye-opening lesson in what thousands of people have to go through every day in the war-torn areas of the world, and when I looked at it that way, I was thankful it was just a game.

You’ll start off with three characters, each with their own backstory and unique ability that will be helpful as you try to survive. You’re instantly given a reason to care about your survivors, and that makes it even harder when the shit hits the fan. Pavle, for example, was a former football player that hasn’t seen his wife and son in a long time, and watching him slowly succumb to depression was unbearable; even though this this is “just a game”. I became incredibly protective of the ones I had to keep breathing, and making sure they didn’t starve to death, kill themselves, or die risking their lives was a laborious and exhausting task.

The decrepit building you call home has plenty of space to build the basics, and if you don’t pay close attention to your character’s needs they’ll start to suffer in a multitude of ways. Building beds and armchairs provide comfort, and having a cooker will keep their hunger at bay, but even trying to perform these simple tasks on a daily basis provides one hell of a challenge. If you have the parts to improve them, the workbenches can be upgraded and that’ll provide you with better equipment to craft, helping to break into areas that weren’t previously available or provide a more nutritious meal. At night, you have to decide which of you will go out and scavenge different buildings located around the map, each one offering varying amounts of parts, food, medical supplies and weapons. Locations may be uninhabited, but more often than not you’ll be faced with survivors that have just as much to lose as you, if not more. As you inspect the various buildings, you can switch between scavenging and fighting, allowing you to attack someone that looks or acts suspicious, but choose wisely because it can go badly – very badly. Marko, a former fireman went out and encountered a family that weren’t willing to trade or share their wealth and I was stupid enough to try my luck, even after I was given the opportunity to leave before anything bad happened. I ended up dying in a bloody knife fight on day five. The tragedy that befell me had astounding repercussions on my group, and things gradually went from bad to worse.

Living in the shadow of war’s devastation is unpredictable and brutal. I encountered two suicides and one murder in my first playthrough – and it never gets any easier. Keeping your people alive gets harder as the days go on and the candour of failure becomes ever present. If you don’t provide the things your group needs, they’ll slowly start to crumble emotionally and physically, and that can have an effect on you too. On numerous occasions, I had to take a break from playing as it became too much to handle, especially when there were children involved. The reason the release on current gen consoles has the sub-title of The Little Ones is because children now play a big role in how you play the game. This addition provides new challenges, and trying to keep a child positive in the ongoing war is just as tough. For me, looking after one in particular broke me more than anything else I saw in the game. One day, I had a knock at the door and a young man called Daniel asked if I could watch over Misha, a young boy that had become separated from his family.

At first, having Misha around was great. He played on a swing I built for him and he chatted with Bruno (the only original person I had left) about his life before the war – spirits were higher than they’d been for a while. Unfortunately after a couple of bad nights of being raided, Misha got badly hurt. His heart wrenching cries permeated the air and it never stopped. All I could hear were his cries partnered with Bruno’s thoughts of how he was failing him and how he just wanted to end it all. A few days later, they left together and I never saw them again.

It can be incredibly difficult and that’s why I failed so miserably on my first attempt. You never get any guidance as to how things work, and the icons that appear over objects and characters aren’t ever explained. You may end up eating valuable food stuffs instead of cooking them because you press on the wrong option, and you may end up fighting with somebody because you forgot to switch back to scavenge after making peace with a stranger. In the small amount of information you do get, you are told things like smoking cigarettes and reading books in an armchair can provide much needed comfort, but it doesn’t tell you how. I’m not asking to be spoon fed at all, but it would help to be given a little bit of a thread to pull on.

This War of Mine is beautiful looking game. The level design is exceptional and there is so much detail in the littlest of things. As you explore new locations, there are personal touches like a letter from a relative or something scrawled on a wall with coal – all with the goal of telling a story and giving some history into the lives and backgrounds of this world.

And so this is a game like no other, and even though many may struggle to enjoy its heavy going narrative, it certainly opens your eyes as to what goes on behind the headlines of the front line. You’re always reminded of why you are in the situation you’re in by the distant gunfire that’s audible throughout, and the stunning score is reminiscent of Gustavo Santaololla’s lonely, broken guitar of The Last of Us. Even now, I’ve only just started to learn the best ways to play, and when you encounter more happier moments, the game opens up a new level of appeal. Stick with it and it’s a game you’ll never forget, regardless of whether you manage to survive or not.

Provides a challenge that you’ll never have experienced before.
Expertly designed visuals.
Soundtrack matches the tone of the game.

Can be very tough to play at times.
Some parts are never explained and can be too vague.

A game like no other, and even though it can be hard to play at times, it still offers a unique and rewarding challenge.

Moonlighter hits 500k and will get Between Dimensions DLC this summer

Everything You Need to Know Before Starting a Video Game Business

How Did The Event Industry Cope In Lockdown?