previous
This War of Mine: The Little Ones Review
random
next
Crashlands Review
1 like 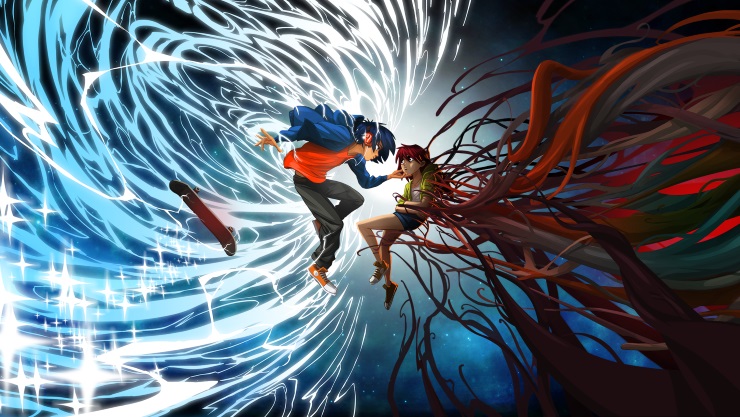 Having experienced Lost in Harmony twice so far, I’m reminded of Valiant Hearts in many places, but not necessarily in a good way. Valiant Hearts, while flawed, is one of my favourite games of all time and from its director comes Lost in Harmony; which does a few things really well, but falters where it matters the most.

This is a rhythm endless runner game that tells the tale of Kaito, and it combines both those genres and tries to stand out. Kaito’s adventure tells an emotional tale about him and Aya, with the story unfolding after each dream sequence. These are basically levels that are a few minutes long each and can be played at normal or hard difficulty.

What really made the story stick with me is the way I interacted with the characters. After clearing a level, Kaito lies on a bed and texts Aya using his phone. Only, you are the one tapping send so it feels like you actually are Kaito. As the levels get harder, the story gets more emotional, and hitting that send button becomes harder each time. There’s a lot of influence from Valiant Hearts seen in Lost in Harmony. The vehicle sections in the former that make you avoid obstacles while music played appear here. Kaito and Aya are on a skateboard travelling through lush and gorgeous landscapes that keep changing, while avoiding obstacles and undergoing aural pleasure through the music. Endless runners on mobile aren’t even remotely new but I love the way that mechanic has been implemented here. Instead of you moving forward, you move towards the player on your skateboard with obstacles coming from all directions. The ones ahead are indicated by blue arrow cues, and your aim is to score enough, or get a 50% or higher rating on the bar on the top right. There are three orbs per level you can collect that give you a nice bonus in the boost bar.

In addition to being an endless runner, it’s also a full rhythm game that involves every mechanic known to rhythm game fans including sliding, tapping and holding, and multi touch. While this sounds good in theory, it falls apart in practice. The early levels have you switch between the runner and rhythm sections but later levels merge them together and it becomes almost infuriating thanks to the controls. If the runner sections only involved a single swipe to switch lanes, it would probably work well in tandem with the rhythm bits. Having controls that only work on the lower half of the screen and ones that are sometimes unresponsive with tons of action on the screen made me not want to play any more – multiple times. Lost in Harmony really needs a patch that fixes the responsiveness or adds another control scheme if the design has to remain the same of each ‘dream’.

Kaito’s Adventure is split up into multiple, aptly titled, ‘dreams’. These have their own unique set of obstacles and landscapes and the music played can be viewed in a list as well. Community Playtracks is where you can show off your creativity by picking music from your own library or downloading track patterns for music from SoundCloud. Hopefully there’s a healthy community here, because I had a fair bit of fun going through popular tracks. As you’d expect, it excels visually, but there are a few inconsistencies. The landscapes are wallpaper-worthy but the character design and enemy design feel completely off. Just like how the gameplay tries to merge two styles together, the art direction feels disjointed. There are also some sections where Kaito and Aya come close to the screen and they look really blurry. I was hoping a game shown off for visuals, would remain consistently beautiful.

The one area where it consistently impresses me (if you hadn’t guessed, yet) is the music. I love the use of different classical tracks in remixed form throughout Kaito’s adventure. Being able to see the exact track also helps and there’s a nice iTunes button to buy the music directly. Digixart really nailed the music direction. I look forward to more content being added with new music selections in the future. Grammy Award winner Wyclef Jean also composed a full song with lyrics that can be heard in the middle of your journey.

I applaud Digixart for attempting to merge two tried and tested genres, but there needs to be more polish put into the controls. While Lost in Harmony excels with its looks and sounds, the core gameplay is disjointed and ruins the experience, especially towards the end when the plot was really getting the waterworks going. I hope more content is added in the future, but before that some tweaks to the controls and level design could really make it shine. For now, I can only recommend this with caution, even to fans of rhythm games.

Gameplay is completely disjointed.
Controls feel unresponsive in some levels.

A beautiful amalgamation of ideas that work on their own, but not together.