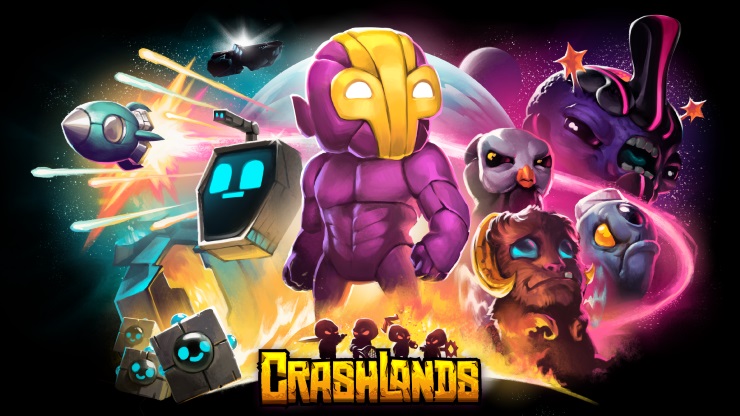 It’s obvious from the get-go that Crashlands isn’t ashamed of its inspirations. It takes a huge number of cues from Klei’s Don’t Starve, from the base concept to several of the mechanics and the aesthetic of the world in which it’s based. But the reason it gets away with it is that it doesn’t rest on those inspirations, and instead attempts to build on them as much as possible.

You play as Flux, a robot who works for the Bureau of Shipping. You’re aboard the “Bureau of Shipping shipment-shipping ship”, the Assess (yes, that’s the BS SS Assess), with your trusty AI companion Juicebox, when you’re contacted by Hewgodooko, an alien nutcase who wants to see you stranded on his world for reasons that won’t become clear until much later. To this end, he helpfully crashes your ship. How nice of him.

The world you find yourself on is similar to the island in Don’t Starve, in that there are no real limits where ecosystems are concerned, most of the wildlife will kill you, and you’ll need to scavenge everything to survive. There’s no perma-death here though, and dying will see you respawn back at your base sans your inventory, which you’ll need to retrieve. The inventory management is a major boon, as the whole thing is very simple. Everything you collect, from grass and wood to animal parts, is stored safely away, and you only need visit one of your workbenches to access the build menu. Laying foundations for a base is easy, while even crafting weapons and armour is a cinch. You can track any recipe you choose, which gives you a handy ingredient counter to follow.

RPG elements keep you working towards something, as you’re always aiming to improve your gear and tools. You’ll begin with basic wooden armour, but there are over 500 recipes to discover and build. Combat is as easy as clicking on an enemy and avoiding their attacks, but if you tangle with the wrong beasties too early you’ll be pushing up daisies pretty quick. Flux doesn’t have skills to level, so it’s important to keep improving your equipment to increase your chances of survival. If you do get hurt, food or vegetation are usually available to restore your health.

You can, if you choose to, raise a menagerie of pets, some of whom are useful companions on expeditions. You’ll need to rescue (read: steal) an egg, then build an incubator and a nest for it to live in, none of which takes much time. Then you can go foraging with your new friend, exploring dangerous uncharted territory and meeting the strange locals. There is a story, too, which is unusual for gather & build games. It sees you helping the indigenous peoples in their struggle against Hewgodooko’s oppression, but don’t expect Shakespeare. It’s more of a framework for the action than anything else. Nowhere near as unforgiving as its inspiration, it features fast travel points and infinite respawns, but still manages to be a lot of fun despite its unwillingness to see you suffer. A cartoony art style makes the sometimes dangerous world seem welcoming, but it’s never as deceptive as Klei’s game because it’s not so hell-bent on ending your life.

Crashlands will appeal to fans of Don’t Starve and Terraria, but its much friendlier nature may turn off those who crave a challenge. The real fun is in finding the recipes and constructing your base, raising pets and eventually developing Flux into an unlikely ass-kicking adventurer. The more you play Crashlands, the more it gives back to you – just don’t give it a hard time for going easy.

A little too forgiving for some.
Doesn't feel all that fresh.

A more story-driven take on the gather & build genre, Crashlands wears its inspirations boldly, but gets away with it.