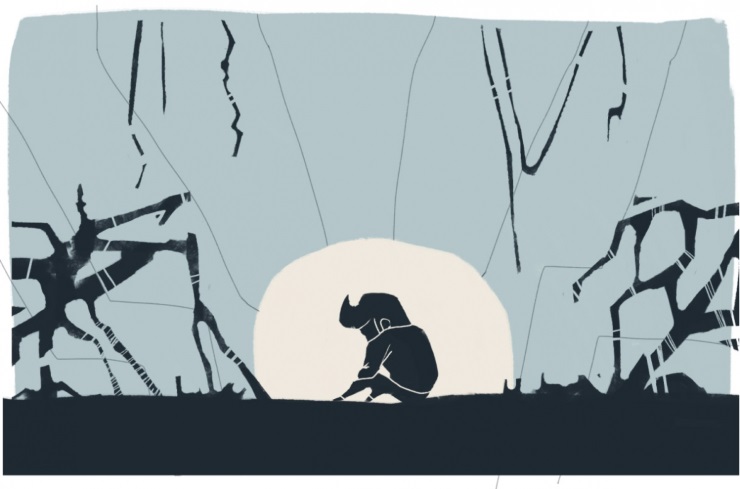 Klaus is a strange name, isn’t it? Imagine for a moment (and you aren’t German in this scenario) how different your life would be if you were called Klaus. Just imagine all the grief you’d have got from fellow classmates, knowing all the while that your parents don’t actually love you – because they named you Klaus. No offence, if you’re called Klaus, obviously. But an unfortunate name isn’t the least of little Klaus’ worries, as he’s woken up in a basement with no knowledge as to who he is, with only the single word “KLAUS” written on his arm; the poor fella.

And it’s a weird name befitting of a very weird game: at face value, Klaus actually looks like a rather simple platformer with a strange story, and it is for a little while, but the further you delve, the more fourth-wall breaking, expectation defying, mechanic twisting it becomes. Lessons you’re taught early on often get manipulated in the most interesting of ways. The trouble is that Klaus outstays its welcome with an unnecessary amount of levels that had me willing for the end to arrive at only about halfway through.

There are five chapters in each of the six different areas, all of which contain several levels, and then there are loads of hidden levels (known as secrets) hidden throughout as well. Every level looks wonderful, with simple pastel colours and bright contrasts, and are all accompanied by a brilliant synth-pop sound track, but all this padding means interesting mechanics become tiresome, and it just left me feeling, unfortunately, a little bored. Even the secrets, which really mess with the physics of the world and throw some rather unique levels at you, become a chore after a while and, even though they reveal the more interesting parts of the story, I gave up fully searching for them towards the end. I’d do them if they were in my path, but I stopped going out of my way. New obstacles and mechanics were still being added even in the final stages, but I just couldn’t help wishing it was over. Perhaps the number of levels wouldn’t have dragged as much had the story in the main world engaged me more. It certainly seems quite unique, as Klaus is sentient and knows he’s being controlled by a player, which leads to an especially interesting segment whereby he refuses to obey your inputs, but with a story, only told through writing on the walls, which is full of ham-fisted Orwellian messages, it falls a little flat. The secrets, though, are a lot more intriguing as they reveal parts of Klaus’ memory and tell you who he is.

While never particularly taxing of my ability, the platforming is that of a really well made and a perfectly serviceable game, if just a little slow for my tastes. Things get a lot better once another character, K1, is introduced. He’s big and bulking compared to the tiny Klaus. So where Klaus has speed and agility, K1 has strength and the ability to glide. This leads to situations in which you must use both skill-sets to complete areas, even combining them both when you use K1 to throw Klaus at high-to-reach places. As is the way with Klaus’ inventiveness even the PS4 touchpad gets a meaningful use: it’s how the player interacts with the world and how Klaus knows of your existence. It’s used to move platforms and lift and lower gates. The only complaint I have is that the boss fights, or at least the two I encountered, are quite underwhelming. For those who aren’t put off by the length, there’s actually two different endings for you to experience if you so desire, along with an Arcade Mode, unlocked upon completion, which allows you to go for those speed-run records if you are that way inclined.

I feel as if I’m sounding quite down on Klaus, which I don’t mean to be as I really do admire La Cosa Entertainment for being so different and inventive with Klaus. They’ve made a puzzle platformer that throughout its entirety continuously goes against expectations, always subverting tired tropes and always attempting to be something different from the norm to standout. It’s just a real shame that Klaus’ narrative paled in comparison to the game design and it lasted far longer than was needed.

One of the most inventive puzzle platformers in years thanks to the way it constantly defies expectations, but the story is nowhere near as interesting as the game design, and it goes on for far too long.