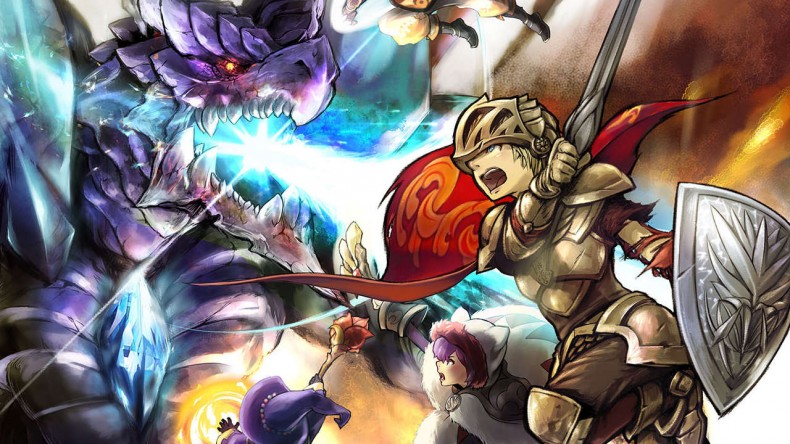 Monster Hunter was a global phenomenon when it went mobile via the PSP in 2006. People were playing it on their commute with random strangers, losing hours upon hours to the pursuit of slaughtering giant monsters and harvesting their parts to make new gear. It’s no surprise that many companies have tried to copy the template, what is surprising is that Square Enix have only now thrown their hat into the ring with their take on the formula.

Final Fantasy Explorers starts with you crawling out of the wreckage of your downed airship. Bahamut has shot you out of the sky, and now he’s looking to put the hurt on you. It’s pretty safe to say that you’re no match for him, a voice whispers “run” and you’re inclined to take that advice. It turns out that you have wound up on the island continent of Amostra, a place where people go out and fight monsters aided by the power of crystals. Being new on the island it only makes sense to become an explorer (apparently), and so begins your new life as a glorified pest exterminator, running monster-killing errands. You’ll explore, gather items, and meet new creatures before murdering them mercilessly. Amostra is a lovely place, with large expansive fields, rocky crevices, barren desert, and beautiful beaches; each location is beautifully detailed and has an excellent feeling of scale, and if it wasn’t for the monsters it’d be an excellent holiday destination, maybe that’s why you were heading there in the first place?

You’re not limited to being a sword wielding warrior during your stay, over the course of the adventure you’ll be asked to take part in exams for new job types – each offering up new abilities and weapons for you to use. These have differing weapon proficiencies, so many abilities are locked to those particular jobs. Magic tends to be usable by all, but weapon skills remain locked. You can choose to do ranged damage, be a healer or a tank style fighter, but it’s safe to say you won’t get as much out of the job system without taking the game online.

On top of regular abilities you can trigger what is known as a crystal surge through constant ability use. These proffer a series of extra abilities that can change how your base abilities work, but unfortunately, when this happens the available abilities are randomised, and you’ll regularly find yourself having to choose something that isn’t right for your class or current situation. Allowing you to choose your pool of surge abilities would have been a much better system. Being a Monster Hunter style game it should be obvious that monsters you defeat drop items which in turn can be used to create new weapons and armour. Your items are how you improve your character too, as you do not acquire levels, instead you improve your base stats by creating new items, and then infusing those items with materials to improve their stats. It’s not complicated in practice, but your core health pool never gets bigger, and health increase buffs don’t tend to be very high.

So, with that being the case, just how do you compete with the bigger, badder monsters in the late game? Final Fantasy Explorers wants you to tackle its world in co-op, and quests can be undertaken in teams of up to four players, which is good, in theory. Some of us are miserable anti-social bastards and may find it difficult to get groups together, thankfully Square Enix has us covered by allowing us to create monster groups to accompany us on quests.

Alongside their regular material drops, monsters can also drop their essence, taking these to the monster counter in the hub village you can bring them to life as friendly creatures to fight alongside you. Unlike the hero these monsters can level up, with strength and health levels going into silly high numbers. Their damage output will help you considerably against the larger creatures, and if they die they respawn with full health after a short time out. This at least makes it feel that no fight is unbeatable, although there may be times where you’re running around like a loon as you avoid the monster’s attacks while waiting for your monster companions to come back to life. Unfortunately, though, you have no way of giving orders to your monster team, and at times my guys just liked to stand in front of the camera and block my view, rather than actually attack, which was annoying when I wanted them to be attacking to remove aggro from me.

Aside from regular monsters, you’ll regularly find yourself up against a variety of dragons and later, Eidolons. The Eidolons are Final Fantasy Explorer’s big fights, and you’ll come across many you’ll be familiar with, like Ramuh, Shiva, and Bahamut. Some of them can have several moving parts that will need to be taken care of to be able to increase your damage output, otherwise the battle(s) can become much more protracted than you’d like. You’ll go through these fights over and over again as well, but this isn’t a bad thing, as you get the opportunity to capture Eidolons through an Encase command during a crystal surge. This gives you their essence which can be used in a special Trance state (another bar you need to fill). Trance is fuelled by a item called magicite, which you gain from capturing Eidolons, this in turn fills your health and ability bars and grants you higher damage output, as well as powered up abilities. Not to mention a special surge ability exclusive to the magicite you are using, like Hellfire for Ifrit, or Megaflare for Bahamut. A lot has been made about the appearances of older Final Fantasy characters, and yes, they do appear, in two different forms. The first being that their clothing is available as schematics for craftable gear. Delivered to you by a travelling Moogle (you should really expect them in a Final a Fantasy title), he’ll bring you the schematics for creating their clothing, and these generally have good stats, so good in fact that when you have create one you’re unlikely to create any other armour pieces; it kind of makes the existence of newer items superfluous. As well as the schematics he’ll also give you a special magicite containing their essence. Once you activate trance with one equipped you’ll become that character for a limited time. This also gives you a chance to activate their special ability from their respective game when you manage to gain a trance surge, and that’s about it. It’s a nice touch, but feels gimmicky thanks to the random nature of abilities available during surges.

In fact, pretty much all the Final Fantasy stuff feels like it’s been out in to bolster the game’s appeal, like Square Enix felt it wouldn’t get as much attention without the Final Fantasy brand behind it; and in a way, it might be right. While the game is good, it’s never quite great. The locations have greater scale than Monster Hunter’s, but the enemies never reach the same size, the combat feels a little stilted and some quest requirements are poorly communicated (I’m looking at you tutorial mission two!). The camera is a pain in the arse too, flicking this way and that with barely any reason, and doing it’s utmost to hamper your field of view. It’s helped in some way with a lock on system, but you’ll always be centering it, or nudging it as it desperately wants to look somewhere other than the direction you want to move in. Circle Pad pro owners will have a better time of it, thanks to the game supporting the peripheral.

Final Fantasy Explorers is a good game with some aggravating little niggles. It looks nice enough, and the appeal of dressing up as some of your favourite characters from the franchise is nice, but the annoying cameras and the repetitive nature of the quests towards the late game can make it feel too much like a job.

Final Fantasy Explorers may tread a new path for the franchise, but it doesn’t offer anything new for the genre.