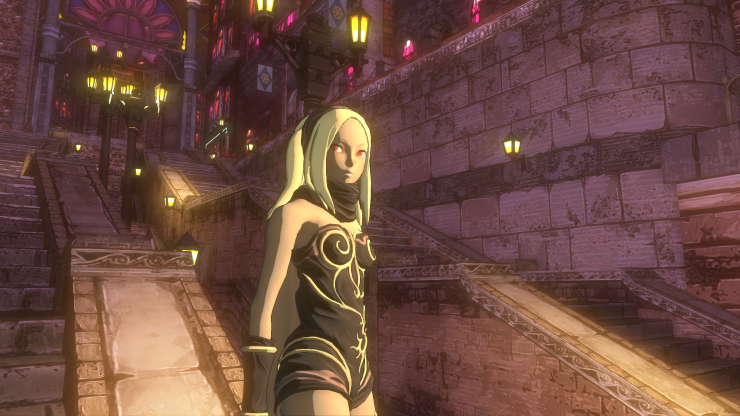 It’s fair to say that the Vita has been something of a red-haired step-child for Sony, younger sibling to the PS3 and then almost utterly eclipsed by the baby of the family, the PS4. While there’s no shortage of decent games available for those who choose to look, there is a noticeable dirth of games designed around the Vita’s bevy of touchscreen and gyroscopic features. Uncharted: Golden Abyss is one, Tearaway is another, and that’s where most people will stop counting – but those people are overlooking a bit of a gem in Gravity Rush.

Originally a Vita exclusive, Sony’s open world adventure has had a complete overhaul in terms of aesthetics and performance to bring it up to PS4 standard, and it’s an impressive change. Running at a silky frame-rate, the greater detail and sharper animations really pop against the muted backdrops, while the improved lighting technology adds class and depth to the world.

The campaign tells the story of Kat, an amnesiac heroine (aren’t they all?) who awakens in a Parisian-styled city alongside a cat with a coat of stardust, whose presence seems to grant her the power to shift the effects of gravity to suit her needs. For example, should she need to reach team other side of the city quickly, she can shift her own centre of gravity and fall upwards, above the roof tops, then shift it sideways to travel above the steeples and chimneys, before shifting it back to normal and landing – sometimes without much grace – on the ground. As a gameplay mechanic it’s both brilliant and frustrating in equal measure. The gauge that controls it can be lengthened considerably by leveling up, but it’s the execution of it that’s sometimes a let down. It’s rarely as slick as you want it to be, and you get the impression that Kat is simply falling in unnatural directions as opposed to genuinely controlling her “flight”, which may well be the point but is still not as cool as it perhaps should be in a game.

Pressing the right bumper removes personal gravity, and then you can use either the right stick or the controller’s motion functionality to move a blue target reticule to the desired location and tap the bumper again to fall towards it. You can change direction as often as you like mid-fall, but landing will see the viewpoint switch so that you feel you’re on the ground even when upside-down. Handily, Kat’s hair always obeys the laws of gravity, giving you a handy guide to which way up you are. While moving around is easy enough (if not particularly stylish), the combat is very hit and miss, literally. Initially, and for a while, you’ll have two main methods of combat: kicking the enemy in their big glowing weak spots, or shifting gravity and Gravity-kicking enemies in their big glowing weak spots. Even later when you unlock a few other moves, these are the methods you’ll use time and again against the Nevi, blobs of darkness dropped from the Gravity Storm currently terrorising the city. The combat is function but can feel repetitive, and the enemy’s tendency to dodge your high-speed Gravity Kick is infuriating.

In between fighting and running up walls, Kat can help the people of the city in numerous ways. The open world structure allows you to dip and out of the main campaign (involving a prolific criminal named Alias and Kat’s rivalry with two other significantly more flamboyant Gravity Shifters) and indulge in side-quests and challenges to earn energy crystals. These are used as currency to upgrade Kat’s various attributes, and can also be collected from the environment. Sadly, the beautiful world is underused, and there simply aren’t enough secrets and collectibles to find. By extension, this means you won’t need to bother actively exploring the city, and will simply jump from mission to mission for around 15 hours until you’re done. The Remaster delivers the various DLC mission packs, which unlock various costumes for Kat, but these are purely cosmetic and the missions, while a nice distraction, don’t offer all the much that’s really new.

The control system works well on the controller, but I found it far easier to simply disable the motion controls and use the right stick to direct Kat’s shifting. It seemed less fiddly and, somehow, much more enjoyable.

Ultimately, there’s an argument for getting hold of Gravity Rush whether you played it on Vita or not. If you did, the graphical boost, tightened controls and bundled DLC make it worth returning to after three years. If you didn’t, then you’re missing out on a unique, compelling adventure only really let down by uneven combat and a lack of incentive to explore its gorgeous world.

Imprecise combat.
Lack of collectibles.
Shifting doesn't always feel as cool as it should.

A solid remaster of a good game means that Gravity Rush genuinely feels at home on the PS4.