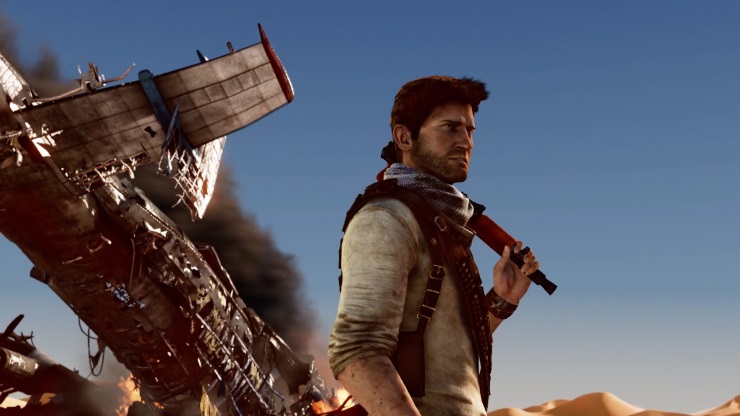 You really have to hand it to BluePoint Games: it knows how to remaster a masterpiece. Most of the time, a HD makeover is simply that: a lick of paint, a little make-up, maybe some bolted on DLC to sweeten the deal. Usually there are a few extra textures thrown in, a little lighting, some new trophies. It’s rare that a developer takes a remaster so far that it almost looks like a true remake.

In the case of BluePoint’s version of Uncharted: Drake’s Fortune, it’s done so much more than simply improve the visuals. Obviously, with a trilogy almost ten years old, the most improved entry in a remaster will be the first game, but they could have cut plenty of corners here and most of us probably still wouldn’t have complained.

Instead, it’s brought that first title bang up to date. Of course it’s still not on a par with the gorgeous aesthetics of Drake’s Deception, but it’s not a stretch to say it looks better than a fair few recent releases. Improved lighting and shadows, a massive increase in environmental detail, enhanced character models, and layers of new texturing are made even more impressive by the technical fixes. Gone is the screen-tear and slowdown that plagued the original, replaced by silk-smooth 60fps and 1080p hotness. For those who need an introduction to the series, it follows explorer and treasure-hunter Nathan Drake, and his partner/mentor, Victor “Sully” Sullivan, on various globe-trotting adventures in the vein of Indiana Jones or Dirk Pitt. He’s your typical charming rogue, the type of video game protagonist who’ll agonise over killing a bad guy in the cutscenes, but who’ll happily spit wisecracks while slaughtering acres of henchmen as soon as the player takes over.

He’s the type of character who’s definitely a good guy because he’s killing the bad guys and getting the girl, but if you knew him you’d have to pull him to one side and have a quiet word about all the brutal gun-murder and casual sex. Y’know, a hero. Sort of. Shaky moral compass aside, Drake is one of gaming’s most popular icons, and with good reason. Nolan North brings an effortlessly likable charm to our intrepid raider of tombs, and the supporting cast of rogues, double-crossers, and ne’er-do-wells add pathos and pith to the white-knuckle storytelling.

From seeking out the lost city of Eldorado in Drake’s Fortune to uncovering ancient secrets beneath the Arabian sands in Uncharted 3, Naughty Dog’s iconic franchise is defined by its set-pieces. A fist-fight through a burning chateaux, a gun battle aboard a sinking ocean liner, climbing up a train carriage as it dangles precariously over a Nepalese cliff (the incredible opening to Uncharted 2 is still one of the best first levels in video game history) – these highly cinematic sequences punctuate exploration, puzzle-solving and compelling platforming to create experiences that have helped define many modern games, including – in a bizarre circle of inspiration – Crystal Dynamics’ recent Tomb Raider reboot. If BluePoint had simply bundled all three games into one package without a single tweak, we might have been happy, but this package is so much more. While the improvements are less noticeable in the second and third games, they’re still effective enough to make a difference. The opening brawl of Drake’s Deception is mind-blowing in 60fps, as the context-sensitive combat channels Drake at his most brutally creative.

At times all three games can lean a little too heavily on combat – especially the first – but it’s handled so well that it never becomes a chore. The cover-based gunplay is always enjoyable, but it arguably plays second fiddle to traversing the environments and collecting glinting trinkets to add to Drake’s collection. Some of the locales are genuinely breathtaking, from sweeping deserts, tropical rain forests and snow-blasted tundras to ancient ruins, spider-haunted catacombs and shadowy crypts. The attention to detail is staggering, and every step you take is steeped in atmosphere.

Perhaps to make up for the omission of Uncharted’s popular multiplayer mode, several new game modes have been added. Explorer mode is a super easy difficulty level, likely added only to balance out the unforgiving new Brutal mode, now unlocked by beating Crushing. A continuous speed-run mode adds an air of competition, and acknowledges the community of fans who have made it their life’s work to tear through Naughty Dog’s trilogy in physics-defying time for the last ten years. Finally, photo mode rounds off the additions, allowing you to capture the dazzling new visuals in all their glory and share them with the world.

If there’s a complaint at all, it’s that some of the special FX in Drake’s Fortune still look a little rough. Fiery explosions in particular don’t look great, and Drake’s hair remains dry and coiffured even when emerging from water. Also, the 60fps isn’t always an all-conquering boon: there are times when The Nathan Drake Collection is a little too slick for its own good, and the smoother transitions can lead to clumsy platforming deaths. Either that, or I’m rustier than I thought.

This is nit-picking, however. I could have happily ignored either issue if not for the sake of balance, because this is quite simply a stunning package. Even if you played all three games on PS3, it’s worth picking up again now – but if for some reason you missed them first time round, maybe because you never owned a PS3 or simply overlooked them, the Nathan Drake Collection is utterly, maddeningly essential. With Uncharted 4 not too far away, this is the perfect time to go off the edge of the map all over again with Naughty Dog’s seminal franchise.

An utterly essential bundle for newcomers and veterans alike, thanks to the sheer value for money and huge technical improvements to three already incredible games.