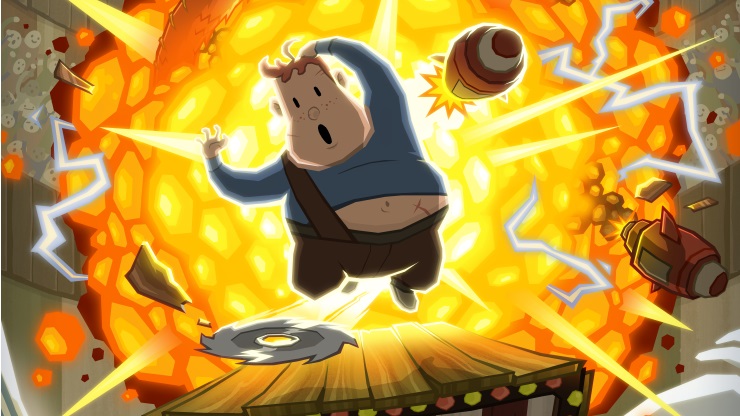 The definition of insanity, it is said, is doing the same thing over and over again and expecting different results. The perfect example of this is Penarium, a knuckle-bitingly frustrating 2D arcade-style platformer from developer Self Made Miracle.

Penarium is the tragic story of a young boy named Willy who, bored with his simple life helping his father on their farm, runs away with the Circus when it passes through his town. Unfortunately, for our hero, the Circus is not the life of adventure and excitement he hoped it would be, and instead he is forced by the barbarous ringmaster to perform death-defying tricks for the sadistic entertainment of the crowds.

Death for poor Willy comes often and in many brutal ways. Squished by huge bowling balls, eviscerated by spinning blades or obliterated by rockets big enough to flatten a small city, it is your job to ensure that this doesn’t happen while performing the various tasks assigned to you in each level. The tasks are simple enough: smash a certain amount of barrels, or collect coloured bottles to make potions for your master all the while dodging and avoiding fiendish obstacles and instruments of gruesome death. Levels are simply designed, with a series of platforms to navigate. There is also a wraparound effect, in that jumping off screen to the right will mean that Willy appears on the left hand, often providing a last-ditch escape from certain death, and another tool to remember in Willy’s very limited arsenal.

Penarium is, on the surface, very simple, but its simplicity hides a brutally complex game. Interestingly though, most of that complexity comes from you. The objective is straightforward: perform the rudimentary tasks to beat the level and progress to the next one, avoiding obstacles along the way; the difficulty occurs when you try to predict where the various obstacles are going to block a particular path. Each jump Willy makes is down to a mixture of timing and luck, and gut feeling plays a huge part in the decision-making. Choosing to jump left rather than right could very well be the difference between staying alive for another nano-second or getting incinerated by a great wall of fire.

Despite death occurring on a regular basis, Penarium rarely feel cheap. The controls are limited to directional input and jump, and Willy moves with such precision that any mistakes that occur are purely down to the player not the game. On occasion the screen-wrap can lead to a cheap death by leaping in to an obstacle that wasn’t there a few moments before, but it’s not often enough to be anything other than player error for the most part. Penarium has three modes to play: campaign, arcade mode and multiplayer. The campaign is split in to thirty stages divided evenly over three different arenas. The difficulty of each level within the stages ramps up slowly, incrementally adding more and more obstacles to avoid; however, when the starting point is “hard”, it doesn’t take too long to get to “extremely hard” before swiftly ramping up to “bastard hard”.

In arcade mode, you try to stay alive as long as possible, smashing crates, collecting bottles etc, and also collecting coins. Those coins can then be redeemed in the shop to purchase particular power-ups to assist Willy as the difficulty starts to increase. In addition, there are leaderboards with which you can monitor your platforming prowess or wallow in your ineptitude.

Multiplayer mode is a simple case of two players working co-operatively or battling out each level to be the first to achieve the objectives. It’s a fun, frantic mode where not only do you need to be aware of where all the obstacles and instruments of your death are located, but you also need to get there before your opponent does.

Visually, Penarium adopts a retro pixelated style. It works with the simplicity of the gameplay and controls, but there isn’t a great deal of variation to the backgrounds for each level, which does niggle a little bit. It’s a small complaint in an otherwise extremely enjoyable game.

All in all, Penarium is an excellent addition to the 2D arcade-style platformer genre. Controls are tight and responsive, and death, while very frequent, is rarely cheap. Gameplay is so fast and furious that the “I’ll just have another go” mentality is easy to slip in to. It is fiendishly difficult in places, but player progression feels real. Gradually you feel more and more skilled as you learn to anticipate the next obstacle and time your jumps with pinpoint accuracy. It seems that doing something over and over again does indeed net you different results, and beating a level that has you stumped for some time is a glorious feeling. Veterans of the genre may find the campaign a little short, but for more average players there will be plenty of game to frustrate and delight in equal measure.

A fiendishly difficult 2d arcade-style platformer that will have you simultaneously shouting at the telly with rage and delight.