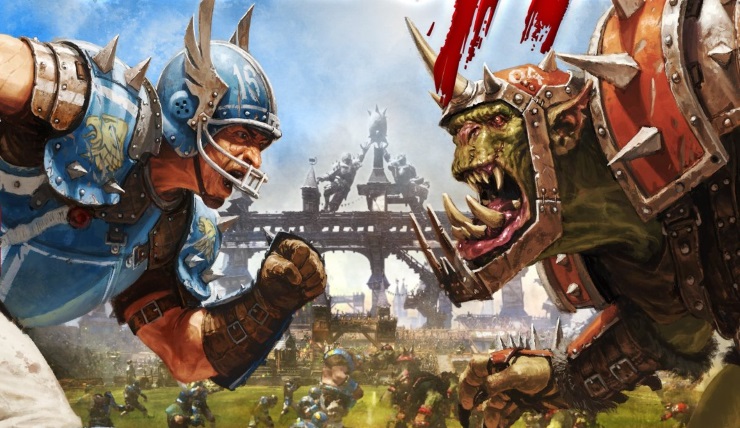 As the shrill clamour of the half-time horn sounds, my team, the Reikland Raiders, are beaten and bruised. Many of my players have been knocked out and battered to a bloody pulp. These dwarfs are as tough as nails and don’t have any inclination to score a touchdown. Instead, they’d rather see me suffer to the point of death than have me win. Can I really overcome these odds, especially when the crowd hates my guts and the referee has turned on me?

When the odds of success have been reduced to zero, Blood Bowl 2 is at its best. You will be pushed to your limit on almost every occasion, but when you are down and out, the underdog within breaks forward into the fray and finds a touchdown out of nowhere. I beat those bastard dwarfs and the taste of success had never been sweeter. Blood Bowl 2 won’t appeal to everyone. It can be very frustrating at times and that isn’t just down to the difficulty spike plunged into your psyche midway through the campaign. The games are split into two halves, each with eight turns and unlimited time to make your moves (unless playing online). With every turn you have a substantial amount of choices to make. You’ll be able to give each of your players a command, such as move up the field, knock down a member of the opposing team with a ‘blitz’ manoeuvre or make a pass. With countless options to hand, it may appear overwhelming on the surface, but I have to commend Cyanide on their tutorial, as the game mechanics are explained in a way that isn’t confusing at all. If you’ve never played Blood Bowl before, don’t panic: you’re in safe hands here.

Every team in Blood Bowl 2 has a different playing style, meaning every game is unique and you have to adapt your style of play if you want to succeed. As mentioned earlier, the dwarfs have very little regard for the rules and will only want to hurt you. The orcs are surprisingly skilled, if a little rough around the edges, and you’ll need to make sure you have players ready to stop them in their tracks when they bring their offensive game into play. The Skavens are ridiculously fast, so you’ll need to move players way back to counteract their swift offensive. The high elves play the passing game and have a high agility level, meaning they can move the ball forward pretty swiftly. Every team is different so always be willing to adapt your tactics. It could literally be a matter of life and death. Now, there are two issues I have with the speed of gameplay, and maybe I’m being picky – after all, I’m no Warhammer aficionado so this could very well be a walk in the park for most fans of the series. When waiting for the opponent AI to choose what they want to do, you can sometimes wait for up to two minutes before anything happens. I understand this is a game of tactics and skill, but when you are playing against a computer with copious equations and formulas built into the code, you shouldn’t have to wait for what can feel like a lifetime.

The other main issue I have with playing is the “chance of success”. More often than not, you’ll trip while on a run or get punched in the chops when it should have been you bringing the pain. With every choice you make, a percentage of the predicted success of the move will present itself. Whether you have a 67%, 83% or 17% chance doesn’t seem to matter because, more often than not, you end up on your arse or guilty of turning over play. Throwing the D6 dice when attempting a block or takedown also gives you no control over what could happen, and the unpredictability of these fights often leads to disappointment. Gameplay is the most important aspect of Blood Bowl 2, but Cyanide has put so much effort into upholding the rich lore of the fantasy sport. In between games, the load screens have fun facts about the history of the hallowed game which help to keep you amused as you wait to play. Jim and Bob are Cabalvision’s genuinely hilarious commentary team. Jim is a vampire who is tasked with keeping his fellow partner in line, and Bob is an ogre and former player of the sport; ugly and daunting in appearance, the large brute is made less threating by the “I Love Mum” tattoo on his left forearm. The humour is very reminiscent of the late, great Terry Pratchett. Bob had me laughing at loud on many occasions, and Jim could be equally amusing. Listening to him losing his shit as it was revealed that the team I was playing against had bathed in a cauldron of blood at half time was hilarious – a hungry vampire makes a funny vampire.

The campaign has you coach the Reikland Reavers, a once great team now in tatters. You can buy players, stadium upgrades and different perks to aid you in matches. The “re-roll” perk came in very handy as a trip or drop of the ball could be rectified by using it. As the story progresses and your responsibilities for each game increase, difficulty can gravitate to a higher plain. The level of frustration increases dramatically the further you go, and with the goals for each match growing ever more diverse, failure causes you to start the whole match again. When you consider one game takes around half an hour, falling at the last hurdle can have you pulling your hair out. When you’re not playing the campaign, there is plenty of fun to have online. You can create your own team to take into user-created leagues or matches with friends. The process doesn’t take long and the time you spend waiting to find a match remains relatively short. The Geek Sheiks were a band of ogres dressed in purple and gold uniform, and I led them into battle with some hope for a win in the main Blood Bowl 2 international league. After a short while, my interest had worn thin and I struggled to work too hard on securing a victory. Many opponents online are great strategists and being impatient will not work in your favour. This is the main crux of Blood Bowl 2: if you have the patience and the will to succeed, you will love it. If you want a game that plays like a typical sports sim, this won’t be for you.

Blood Bowl 2 offers an experience unlike anything else out there. It is a major improvement on the original, and there is great appeal in the humour and unpredictability of it, attributing to its overall charm and replayability. I would edge on the side of caution if you are expecting Madden with ogres, but If you have no problem with a game that feels more like chess than it does American Football, go ahead and get yourself a copy.

Commentary has a Discworld feel to it, and is great.
Winning a hard fought match is rewarding.
Superb tutorial to help newcomers.

The unpredictability can lead to frustration.
Can be a chore if you're not patient.

Blood Bowl 2 appears to specific tastes, but offers a detailed and rewarding challenge.