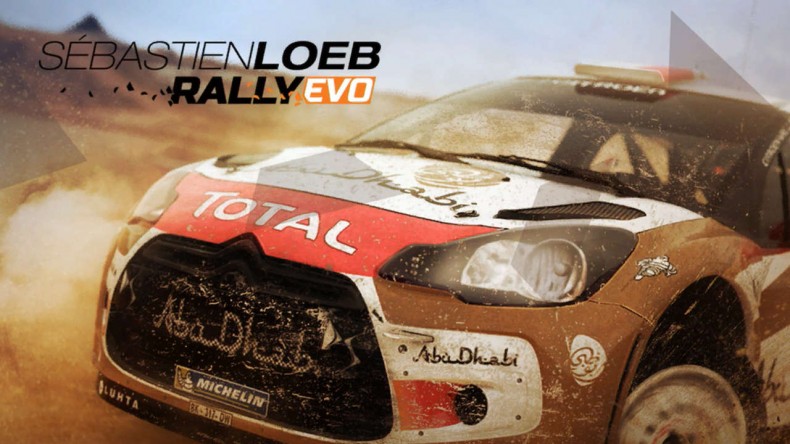 There is a point in Sebastien Loeb Rally Evo where the hurricane of all the information you are receiving starts to swirl around you, while you sit in the middle, calmly making split second decisions, and stripping precious seconds from your previous run. Let’s be clear though, the road to achieving a level of mid-storm serenity is going to take more than a couple of runs, because Mr. Loeb isn’t about put his name to a simple arcade racing game that can be picked up and mastered after a couple of hours. No, this has been designed as a rally simulator first and foremost, and evidence of this is present from the opening option screen through to when you hit the track.

From the beginning you can chose your team names and nationalities, down to the decal on your helmet and the colour of your racing threads. A tutorial mode gives you access to tarmac and gravel tracks and allows you to get to grips with the handling. Those used to the glue-like grip of other recent racers are going to be in for a shock because Evo does little to make life easy.

But honestly, first impressions aren’t brilliant, your car will seem to lack any weight, you’ll career into walls and overshoot turns in most of your first attempts at the even those tutorials. Brakes feel underpowered and questionable. You’ll be wondering why your back-end keeps on sliding out, despite the fact that you thought you took a corner perfectly. The car seems to be made of cardboard, as the smallest bump can have you flipping the vehicle onto its roof with ease. As far as giving you confidence in what it offers, it’s not off to the best start and you’ll wonder why you even took your car out of the garage. But after struggling for a while though, slowly adjusting to the handling, then you’ll feel confident enough to jump on to the meaty selection of choices that is laid out before you.

Quick Mode gives you the chance to pick up and play, and jump in for some immediate driving challenges including the full Rally and Rallycross, Time Trials, and the ultra challenging Pikes Peak mode. It wasn’t something I spent a vast amount of time on, preferring instead to dive into career mode – which is where the main fun is to found. Split into several distinct modes, the most unique part is the Loeb Experience, where you’ll have the choice to drive some of the main events that helped to shape Sebastien’s career. Be warned: these should really only be attempted once you get some driving hours under your belt as they are tough and unforgiving to the point of being rage-quit material.

It’s better to keep to the career choice at the beginning and head into the “debut” section, where you will be introduced to the various individual main game modes on offer, though there is nothing to stop you jumping into the other events as long as you have gained enough Reputation to unlock them. Credits allow you to unlock vehicles by purchasing them or renting them for one-off events. It makes more sense to race more, build up your credits and buy the cars outright, as renting affords you one use only and can work out to be a bit of a false economy – especially if you are playing tracks for the first time. What it does do, though, is create a path of progression where other classes become available such as Vintage or New Era where you will race different types of cars in different countries.

With every race you’ll gain both Reputation and Credits which increase with your race position. It’s a system we’ve seen used by DriveClub successfully, and it does an equally good job here. Milestone is not kidding when it claims to have over 300km of track waiting for you to drive. The number of races and events you can take part in for the debut section alone will provide you with hours of entertainment, with three sub-sections containing a total of twenty-four events.

You have straight up single stages and rally where you have to get to the end of the course as quickly as you can and your position will be decided by beating the unseen AI opponents. For those who want to get up close and personal. Elimination rounds work in a last man standing style, where the last place car drops out after short amounts of time. Rallycross races turn into a stock car frenzy where skillful driving sometimes step to the side for occasional bumps and shunts and is a good release for frustrations caused by the main modes.

And there’s plenty of customistation, too: the front and rear suspension can be altered, the brakes and transmission tweaked. You want to change the camber angle? You even know what the camber angle is? Then crack on and fill your boots. It’s here that you really start to see the divide between something that is a simple racer and the simulation on offer here. Wonderful touches like some of the prominent rally car histories show how much love Milestone has for its subject matter: they want you to love driving a rally car too, even including a rewind button to help out those that struggle.

Initially, I reveled in my glory of being absolutely terrible and blamed everything from the handling to the lack of width in the roads. But the simple fact is that unlike the sweeping barriered tracks of DriveClub which, after practice, can be remembered with relative ease, the rally tracks here have copious amounts of trees to hit and ditches to plunge into. Tracks look like my three year old son has tried to draw a slightly wavy line, in an earthquake while leaning on a washing machine on full spin. Attempting to remember a track in rally is close to impossible, something you’ll learn very quickly. Bless the presence of the co-pilot who is there to give you notes and warn you of upcoming turns and bumps. Dialling down the AI is something else to consider, as even on the medium setting you’ll be trailing the pack by a good twenty seconds. On Rookie level, the drivers drop their skill level down to your incompetence and you are given a fighting chance and the opportunity to start to earn some credits and reputation. Everyone has to start at the bottom and work up.

It can be a difficult racer to get to grips with, and it definitely doesn’t have the visual flair we’ve come to expect of a racing title. But that would be drawing criticism of it for all the wrong reasons. The care and attention that Milestone has put into it, coupled in with the frankly ridiculous amount of content (including the amount of vehicles and modes) makes this an easy recommendation to add to your collection. I’m a terrible rally driver, but thanks to the brilliance of Sebastien Loeb, I’m getting better.

As close to the Rally experience as you can get.
An abundance of content.
Presentation and detail is fantastic.

Will take time to make progress.
Not as shiny shiny as other racers.
Realism might put some players off.

The care and attention that Milestone has put into it, coupled in with the frankly ridiculous amount of content (including the amount of vehicles and modes) makes this an easy recommendation to add to your collection.