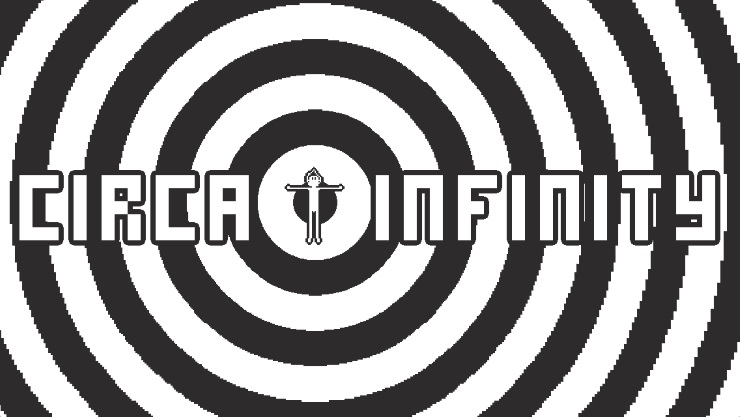 I stumble across quite a few games on Steam that hook me in real good. Most are rogue-likes or puzzle games, and the ones that rely on simple control schemes are usually my favourites because they focus on level design and platforming over complex control schemes. Circa Infinity was previously only available on Steam, but is now a puzzle platforming game for iOS. I haven’t been this hooked to a game on my phone since Downwell came out.

And it’s a very simple game in theory: you control one of two characters and move around concentric circles while avoiding enemies. Your aim is to get to the middle and touch the candy which indicates the end of a level. Each level is split up into multiple sections of these circular corridor like structures and mechanics are introduced along the way. There’s no tutorial because Circa goes the route of games like Pivvot where a new enemy or mechanic is introduced alone and then slowly merged with previous ideas.

Enemies are either stationary or moving along with the circles that rotate. As you clear the first few levels, they switch between the outer and inner circles, and with multiple foes, this becomes quite the challenge. I adore how progression into a level happens with the previous sections still present on the outer rim of your vision. If you happen to die (and believe me this will happen often) you are simply transported to the previous section of the level. In some cases this will mean quickly reacting to enemies, and if you aren’t careful you’ll get thrown back a few sections.

From a content standpoint, there are fifty levels to get through. Each set has its own unique boss fight as well and these are fun and frustrating. The boss fights at the end of each set of levels test everything you learned so far with a few twists, and it’s superb. I didn’t expect a game like this to even have boss battles, but they add a lot to the experience.

Controls are important in twitch reaction games and platformers, and Circa Infinity has a few predefined control schemes with the three on screen buttons. Given that everyone has different preferences, I expected an option for floating controls or the ability to manually move buttons to positions of my liking. The default positioning gets annoying on the iPhone, although navigating across menus and options before jumping into a level is fun thanks to some clever design. Interface navigation is done just like a level in Circa Infinity.

It has a striking visual style going for it, too. Level animation is similar to that seen in cartoons when characters travel through time with concentric circles. I enjoy stylish interfaces and art styles so wasn’t disappointed at all, here. The character explosions when you die are animated really nicely as well. My only real complaint with the visuals is how the on screen buttons look while playing. Jack and Jim Fay’s soundtrack perfectly complements the visual style of each level and add a lot to the experience while playing.

Circa Infinity reminds me of Super Hexagon a lot: it has catchy music and involves quick reactions. Combine those with great level design and interesting enemy mechanics and you have a winner. I just wish the controls had been implemented a bit better with freedom of button placement. As it stands, this is a definite purchase for your iOS device if you are a fan of games like Super Hexagon and enjoy thinking on your feet.

Controls could be better.

Circa Infinity is a great puzzle platformer that has me utterly addicted to it in a way I haven't felt since Super Hexagon.