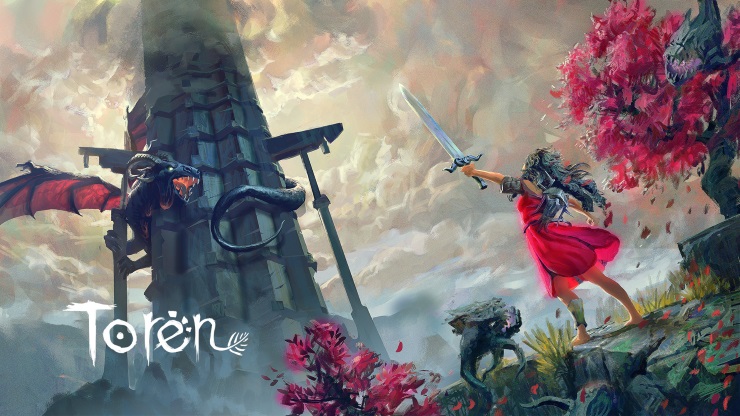 Toren is perhaps one of the most peculiar games I’ve ever had the pleasure of playing. It’s the debut title from Brazilian indie developer, Swordtales, and one of the first to be supported by the new Rouanet Law in the country. This is extremely relevant to consider, as I believe this relatively unexplored culture in game development led to an experience that subverted a lot of the conventions of Western videogames.

And yes, I did use the word experience, because that’s what Toren is for me. It’s a poignant, resonating tale – one that I still don’t quite understand, but also one that I just can’t stop thinking about.

The plot to Toren is actually rather simple. You’re the Moonchild destined to climb the tower (aptly named Toren) and defeat the dragon that resides at the top, lifting the curse from the land. All sounds very familiar, I know, but then in the middle of all that, Toren explores a lot of different themes and concepts, in both explicit and implicit methods that are really quite interesting. A theme I personally noted was the idea of man versus nature, through the way the tower came into being and then how it became such a beautiful, but decrepit and mysterious place. There are ideas of dreams and what’s reality and what isn’t; the plight of growing up and becoming what’s expected of you – is our fate pre-determined or can we shape our own path in life, and how futile the whole affair can be. As a young person who is at the stage in my life where I really needs to start thinking about what type of person I want to become and how I’m going to live my life, Toren’s ambiguous story telling (which often made me feel lost and confused) still managed to convey different messages to me, and prodded my mind into really thinking about life. So much so, I genuinely had to go on a night-drive to be alone with my thoughts.

It is rather hard to really explain without completely ruining it, but Toren is extremely polysemantic, and it’s likely that everyone who plays it will take different thoughts away with them, but thoughts that will last long in the mind well after the controller has been put down.

Aside from the thought provoking themes, Toren is a fun to play. It’s clearly a bit budget in its mechanics, but Swordtales don’t rely on them too heavily, so they never outstay their welcome. The combat is rudimentary, but you only need to swing your sword in two different instances, as the other possible encounters are all easily avoidable. The platforming in Toren is rather floaty, as you hang in the air for quite a while before nestling on the ground again, but it fits in with the ambiguous, dream-like world. Despite the lack of focus developing the mechanics of the game, Swordtales have done very well to make them work within the parameters they set. Conversely, a lot of time and money certainly went into making the tower beautiful. The warm and friendly lighting coupled with the vibrant colour paints a picturesque, therapeutic world, but as I explored it, I noticed that something had definitely gone wrong there: statues were crumbling, walls were being defaced by greenery, staircases were eroding away, and I was completely alone. At one point I removed a rock and a hanging woman came tumbling down, it was unnerving and contrasted so much with how beautiful the place was. The excellent, atmospheric sound design just adds to the eeriness of the tower.

I also loved how much Toren experimented with the camera. It never fixes right over the shoulder, but instead cuts to interesting angles as you progressed through the world. You still have the freedom to move it slightly, but the different angles make the game flow nicely and give it a pleasant pace, even though a couple of cuts felt a little weird and jarring. That’s not the end of Toren’s experimentation either; with the two boss battles being different to anything I’ve previously experienced. They weren’t exactly hard, but they felt new and I had to think about how to win. The same goes for some of the platforming sections, with one in particular that the game doesn’t tell you how to complete it. In fact, it rarely tells you anything that is easily decipherable, and my greatest challenge was working out just what was happening.

My only real quam with Toren is that the checkpoints are, annoyingly, placed quite far away from some of the more testing platforming sections. It doesn’t hesitate to just throw you all the way back if you have a mishap, of which there will be a few, which is frustrating. But these do little to diminish my love for Toren, as it’s an experience that has thoroughly resonated with me and one that refuses to leave my thoughts. I’d implore everyone and anyone to play it in one sitting, and see what meanings they can take away from it.

Some camera cuts can be jarring.
Frustrating checkpoint placement.

A beautiful and thought provoking exploration into so many different ideas on life, which can be completed in one joyous, yet bewildering, sitting.

Indie Adventure Game Toren Set to Launch This May