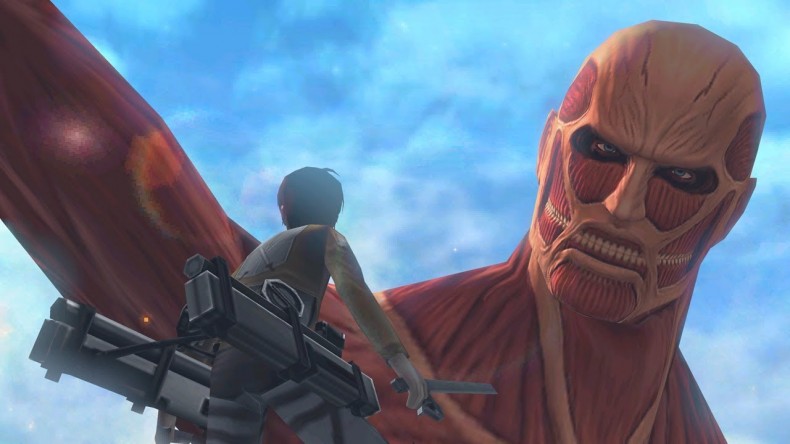 When Humanity in Chains was announced for 3DS in Japan, I was still knee deep into the manga and anime. I never thought I’d get to play it given region locks, and even considered importing a Japanese copy just to own the game. After finally playing through the story mode and the online multiplayer, I’m not at all happy. Almost everything after the anime opening is a let down, and it’s worth noting before we go any further that there will be spoilers for the early episodes of the Attack on Titan anime in this review.

Games based on anime usually turn out really bad. I’ve experienced this quite a few times before. In this case, having watched the anime twice and read the manga, I wish things turned out differently. Attack on Titan: Humanity in Chains relies heavily on cutscenes and music from the anime, and this reliance on things lifted directly from the anime is one of the things making this game tolerable. There are three main modes: Story, World, and Extras. The World mode, that has online multiplayer component, is locked behind some story content. Story Mode lets you play as multiple characters from Attack on Titan including Eren, Mikasa, Levi, and more. You start as Eren with some tutorial missions explaining the controls and these are quite well done. The controls are surprisingly solid for most of the gameplay, using the C Stick on the new 3DS or circle pad pro on older ones. Missions range from fun ones that involve using your Omni-directional Mobility Gear to take out titans in different areas, to garbage ones involving collecting items from the same areas with or without titans. As the story missions progress, you unlock the other characters and more varied missions, like riding a horse while avoiding titans, among other things.

The anime story is followed quite nicely and there are cutscenes before and after each mission with a rating awarded to you based on how you completed said mission. I only really had trouble with one particular mission that involved protecting Eren in Titan form while he carried that massive stone to the broken wall. I really wish there was a way to retry a mission instead of going through the mission failure dialogue and having to select it again. I beat the story mode for all five characters in about six hours and unlocked World Mode in about one and a half hours. If you’re someone who likes to thrash every mission in games, you’re in for a boring time. Playing through the same missions two or three times with just the character you control changing is just plain boring. The highlight of the game is trying to take down titans with your Omni-directional Mobility Gear and propelling yourself to slice their body parts. When DOA (the song) plays and you control Mikasa and slice titan necks, you feel like a complete badass. The actual slicing mechanic is a QTE every single time. It doesn’t take much practice to be able to take down every titan with critical hits. Eren in Titan form has a single combo that you can keep spamming to kill anything. These missions are even more monotonous than the same QTE over and over again.

One of the biggest shortcomings here are the visuals. The environments look bland and repetitive even inside the walls of the city. The characters you control look serviceable but some of the other things made me cringe. Think Final Fantasy Type-0 HD level poor environments at a lower resolution. Using the 3D makes the performance take quite a hit, with frames dropping all over the place. Titans running in the background suddenly seem to be a slideshow from far. While most Atlus games get dubbed, Humanity in Chains only has the original Japanese audio. The Japanese voice acting is great and if you’ve watched the anime, you will appreciate this. A lot of the dialogue hasn’t been subtitled for some reason. Every character has a phrase they say when you go into their missions and when they complete a mission. I have no idea what this is because I don’t understand Japanese.

There were no issues with the performance in multiplayer, but the missions involve the same things as story mode, but even the addition of a human for co-op made no difference to the dull missions. You get to unlock harder missions one by one in the form of Scout missions that finally offer a good challenge with more aggressive titans.

Humanity in Chains is disappointing. Attack on Titan has so much video game potential, but this is just a waste of said potential. Attack on Titan deserves a fantastic game, not a mediocre one in the form of monotonous missions padded with cutscenes. I can’t recommend this to anyone not familiar with the anime and manga, and even hardcore fans will find it hard to love.

You feel like a complete badass from the Anime.
Music in game is authentic, and great.
Controls surprisingly well.

Story missions get boring very quickly...
...and some are awful.
Ugly environments.
Using 3D makes the performance drop quite a bit.

A passable game only recommended for people who really loved the anime or manga and are starving for a game.