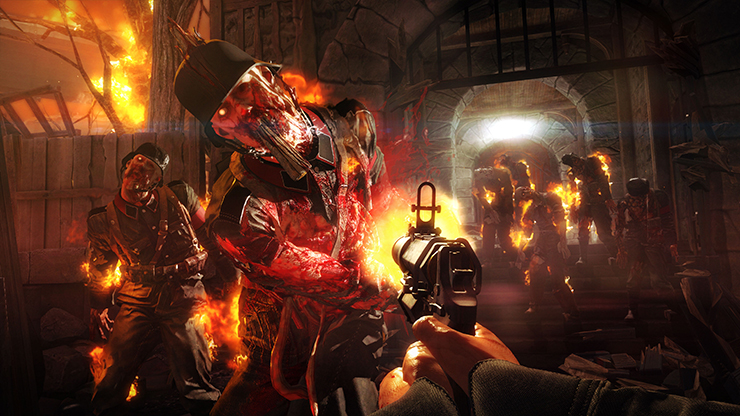 As some other developers have done with their titles, MachineGames has taken Wolfenstein and added an element of the supernatural to mix things up. However, whereas certain offshoots have excelled in the weird and wonderful, The Old Blood is actually at its best when imitating its predecessor. Bringing up the triumph that was Wolfenstein: The New Order — which everyone expected to be a complete wreck — only lessens The Old Blood further. The former was a balls-to-the-wall shooter with some ridiculous set-pieces and environments, but it had heart. It gave you time to take in big events by allowing you to explore your surroundings and converse with other characters. The Old Blood doesn’t do that. It puts an Assault Rifle in your hands and wants you to blow the heads off of some National Socialist German Workers’ Party members…not that there’s anything wrong with that either, of course.

Prior to the events of The New Order, The Old Blood sees Bald Eagle-loving and Swastika-loathing B.J. Blazkowicz enter Castle Wolfenstein with fellow OSA agent, and (possibly) Tom Jones aficionado, Richard Wesley. Their goal is to find documents that point to the location of Wolfenstein’s main baddie, Deathshead. Naturally things don’t go exactly as planned, and B.J. eventually finds himself attempting to escape the fortress as German madman and lover of torture, Rudi Jäger, tries to end Blaskowicz’s life. In this, the first act of The Old Blood, you’re never given a moment to breath and take it all in, making the admittedly fun, non-stop action feel forgettable. When everything is moving at breakneck speed, memorable moments and story beats are lost. The caveat to that is the returning stealth sections from Wolfenstein: The New Order. It’s always a joy to see The Old Blood give you the choice of how you want to take on a group of enemies. Do you go into an area and destroy everything in your path, or sneak around in the rafters and pop a commander in the head with your silenced pistol? This choice made The New Order feel like more than just a mind-numbing shooter and the opportunities to do the same in The Old Blood are just as satisfying.

Helga von Schabbs is Blaskowicz’s main foil, here. The Nazi archaeologist’s crypt digging in a creepy German town during the second act has led to the undead regaining the ability to move one leg in front of the other. In other words, Nazi-zombies have made their way into another piece of interactive entertainment. There’s a strange dichotomy present here as there are more occasions in the second half to witness some character progression, but the fantastical element dulls the entertainment. Nazis in Wolfenstein are meant to be no-nonsense soldiers, sometimes in massive suits of armour. They’re not meant to be akin to a group of eighteen year olds shambling out of the pub in the early hours of the morning. Sadly, that’s when The Old Blood becomes even more of a shooting gallery than before, and stops letting you approach impending shootouts in a more sneaky-like fashion. The inclusion of the precise Bombenschuss sniper rifle and the Schlockhammer shotgun (with its rapid fire abilities) are great, and really rewarding ways to down a few of the red, white and black crew, but the Pipe is what MachineGames is hanging its hat on. This more-or-less replaces your cutting tool from The New Order, becoming your way to silently kill canines and also open doors or climb specific walls. It’s interesting to see the ways it’s used at first, although it doesn’t open up areas to you in the same way the cutting tool did before it, so essentially feels like a poor man’s substitute.

With The Old Blood’s runtime coming in in the single digits, those who want their games to last longer will be overjoyed with the addition of a Challenge mode. Allowing you to play particular passages of the campaign in order to rack up a high score and see your name in lights on the leaderboard, this gives some replayability to those with a yearning for more B.J. action. The idea of having Blazkowicz come up against the walking dead, muttering a few deep and meaningful lines to himself that seem utterly ridiculous within the context, is so ludicrous, it’s beautiful. Yet, reminding me how good The New Order is in the first act with similar gameplay only hammers home the fact that the reanimated corpses just aren’t all that enjoyable to dispose of.

The Old Blood is disjointed in its execution. The first act features the gameplay that was loved by many in what came before it, but lacks those character-building moments, while act two presents more intriguing development, but doesn’t feature enough of what made The New Order great in gunplay. But hell, if you want to murder more Nazis, and based on the history of video games and the buying habits of the video game playing public, I’m guessing you do, The Old Blood will satisfy your urges. It shouldn’t be understated how fun the fun the gameplay of The New Order was, and this is more of the same, but also, in some ways, disappointingly less.

That same great gunplay from The New Order.
New weapons are great fun.
Challenge mode adds a lot of replayabilty.

Zombies just aren't that fun to shoot.
Lacks the moments of reflection from The New Order.

If The New Order was up your alley, The Old Blood will be, too. But here, it's all about murdering nazis and zombie nazis, with less of the reflection.