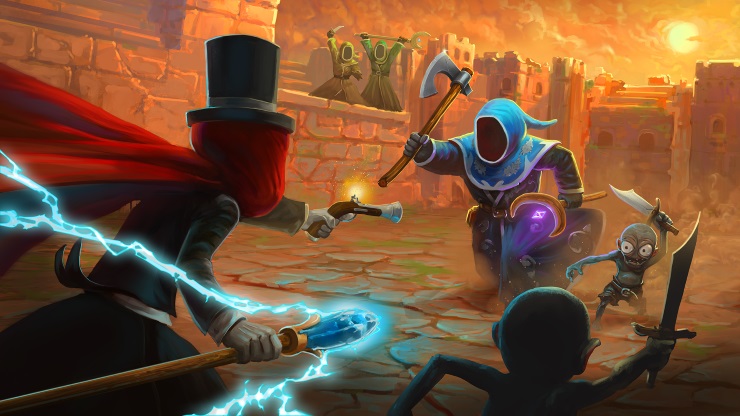 As far as my perception of free-to-play games goes, titles such as Magicka: Wizard Wars have a tendency to appeal to a niche market of gamers. I’ve never really felt included as one of the people that F2P appeals to (or have been created to appeal to), but Paradox’s new Magicka game may have changed my mind.

If you’ve never played up a Magicka game (or any real spellcasting PVP title such as WoW and the likes), the controls might be a bit difficult to pick up to begin with. It’s not that they’re complex or mapped poorly, it’s just that they demand a unique play style that can take a while to get into the swing of. Pressing a variety of keys to do an array of spells while clicking to walk and right-clicking to cast is a lot to process at once, especially to novices such as myself. Plenty of times I found myself accidentally advancing into a horde of enemies instead of backing away, or spraying my own teammates with a barrage of fire instead of members of the opposing team.

After getting over my somewhat frustrating amount of inexperience, Wizard Wars became more enjoyable. The amount of spells available to cast, free of mana or whatever other magic meters can be present, is expansive and the combinations you can muster with them even more so. Elemental magic can be combined such as fire and rock to create fireballs, rock and armour to create a suit of stony armour – and so on. This adds a lot of discovery to the game, and it is interesting to play around with the variety of spells to see what kind of outcomes I could get. As well as this, there is a huge mastery tree for players to climb and conquer: a system that, once mastered, will offer the player and insane amount of prowess over online matches. Spells can be used in different ways also – either cast on oneself, or directly on to other players. Clicking the middle mouse button allows for a spell to be cast around yourself, each spell having a varying effect. Healing spells cast around yourself will heal your character, but can also be cast onto teammates to help them out in a pinch. Offensive spells such as fire or ice, when cast around yourself, will result in blast damaging anything within a certain radius which is effective when in close combat or surrounding by a group of enemies. Spells can also be charged, with either one, two, or three power ratings. Higher charged spells will result in more damage but while casting, will slow your character down and leave you at the mercy of other players’ magic.

Three game modes are available: Wizard Warfare, Soul Harvest and Duel. Wizard Warfare is exactly what it sounds like, a 4v4 deathmatch and the team with the most kills wins. Soul Harvest is a little different, with teams having to venture out into the map and kill NPC monsters to harvest souls with the occasion big beast (trolls etc) spawning in to provide a load of souls at once. Duel is perhaps the most enjoyable mode, if not slightly unbalanced, as you go one-on-one with another player in a free-for-all. My main gripe is the insanely long game times. I started my first online match (the game is online-only) and found myself in a single match for just under half an hour. When games go on for so long, it’s all too easy to lose interest and quit out – something which plenty of players do when things don’t go their way. Eventually it can become just you and one other guy left after the entire opposing team quits out, which hardly makes for an entertaining experience.

Once you get over the tricky controls (mostly my inexperience, I’m sure) and can suffer the dragged out matches, Magicka: Wizard Wars boils down to being a pretty good little game. Its expansive magic system, entertaining game modes and rewarding mastery tree is sure to keep players coming back for more, and it certainly works well as a good hype tool for the upcoming Magicka 2. Although it’s good enough to rank decently, Magicka ultimately fails to overwhelm on any level, but what can you expect? It’s a lot of fun when the stars align, and you can hardly shake a stick at its price point: all this wizarding goodness for the grand total of not-a-penny. If that isn’t reason enough to go give Wizard Wars a spin, I don’t know what is.

Tricky controls for newbies.
Dragged out matches leads to quitting.
Fails to overwhelm in any aspect.

Despite its irksome shortcomings, Magicka: Wizard Wars succeeds in amply entertaining the frugal among us… at least until your next paycheque hits.