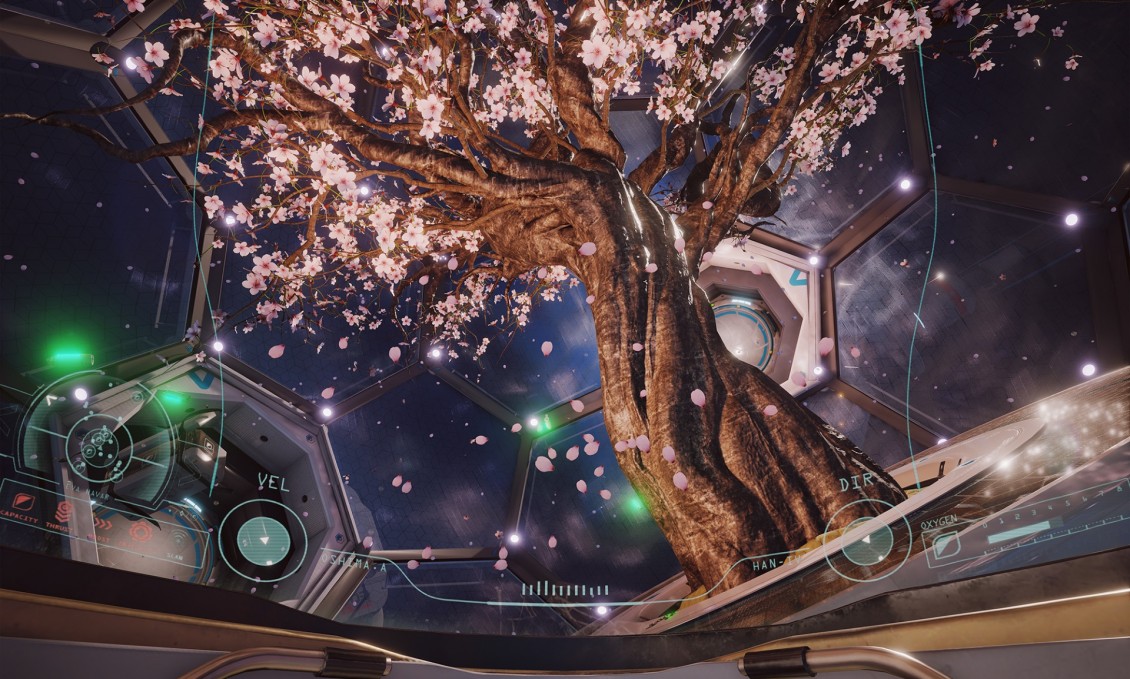 You may have noticed that a few weeks back I swanned off to London to play Adr1ft, or at least I hope you noticed, I did write a preview on it. But back to the matter at hand, because at that very same event I sat down with Adam Orth, creative director on ADR1FT (which basically means he is the head honcho) and co-founder of the studio behind it, Three One Zero. We chatted about many things, ranging from his game through to VR and, of course, where he keeps his ketchup.

Even with my short time with Adr1ft the lonyness was something that was obvious. You really do feel like there is no living thing for millions of miles, something that no other game has really mastered. Floating out in space is incredible, and being alone really adds to that moment as there is nothing to distract you from your goal and the truly impressive visuals. “There’s a 1 in the title for a reason, it’s a sole survivor situation,” he explains when discussing this loneliness, “I mean you’re never truly alone, you always have the ship computer giving you information, there’s mission control always contacting you, but it is meant to be a solitary single person trying to overcome tremendous odds.”

As Orth mentions, the odds truly are stacked against you in ADR1FT. Not only are you alone in space, but your entire ship is ruined, meaning you are constantly avoiding debris while trying to repair the ship to somehow get yourself out of this situation. In my brief demo the entire time I was heading for an area of the ship that could apparently be fixed, which gave a similar gameplay experience to a typical wander-game, where the only action was moving around the environment. But Orth was quick to challenge that assumption when we sat down and talked.

“First of all I do not agree with the term walking simulator, I think it’s a really horrible label. If you’re in a world, and you’re moving, and you’re experiencing something, that’s interactivity, right? There’s lots of stuff to do in ADR1FT, there are lots of mechanics and there are lots of ways that the environment interacts with you. Very specifically our movement mechanic, which is using oxygen as a shared resource where you have to really kind of make decisions about when your gonna use your propulsion and when you’re not, and when you’re going to use the natural forward motion to get you to places.”

While movement around the world may be one of the few traditional actual gameplay mechanics, they have certainly managed to nail it. Floating around space feels weirdly realistic, even though I have no idea what it is like to actually float around space. The way you move around, and the momentum that comes within a zero gravity environment feels incredible, and it must have taken ages to get it to feel right. Or maybe not? “We hit our stride with it [the movement mechanic] really early on, we really haven’t changed it much over the course of the game. Once we moved the controls over to a combination of a FPS and a flight sim it really became fun just to move. We actually had Richard Garriott come through at E3 last year and he’s been to space, he spent some time on the ISS and he told us we nailed how it feels to move through space, so you know we kind of stopped there. Once we had a guy who has been in space confirm it we felt pretty good about it, we have no real clue what that’s like so it was cool to get validated like that.”

Orth was once a part of Microsoft, (that’s probably where you know his name from) but left the tech giant to create ADR1FT. His studio Three One Zero is very much what you would expect of a typical indie outfit, a small team of people working on a single project that they are all clearly passionate about. Speaking to Orth it becomes clear that he prefers this setting. “I much prefer having a small team, in so many ways. It’s interesting because the thing that freaks me out the most is that I’ll be sitting there going ‘man this is such a good idea but they will never let me do it’ and then I remember that I only have to ask myself. That can be paralyzing sometimes because you have to make all the decisions, but the type of games that we are making, it would be too hard to make with a giant team. You wouldn’t have that level of intimacy that I think is in our game and I wouldn’t want to make it with a bigger team. As soon as you have more than ten people, you’re doing more meetings than you are making the game. ADR1FT is too small and intimate for a hundred person team to do.” Obviously when you chat to any developer you are going to talk about their game, it’s the way things work, they want to sell their game, and you want to know about their game but this isn’t just any old game; it’s a VR game, and will be available on the Oculus Rift from launch (and incidentally Adam confirmed it will come to other VR headsets). So I decided to see what Adam thought about VR in general and it was certainly a subject he was happy to talk about. “VR is definitely here to stay. It’s too big at this point to go away and the interest and excitement that I see out in the world is real. We finally have the machines and the systems to do it in the right way, and the screens and the headsets are at a really good place right now. I think it is going to take a year or two for something to go be big enough for mass market to make people want to do VR. I don’t think that will be a video game, it’s going to be something like Facebook or Instagram or something new that really makes VR a thing that tips everyone else into it. There’s no question in a couple of years that everyone will be using VR in some form.”

Saying that video games won’t be VR’s killer app seems like a strange thing for someone who is making a VR game to say, but from our discussion he seemed sure that VR will become a everyday thing, but it won’t necessarily be video games that people use it for. But he is making a VR game, so I wanted to know how much that affected the development. “For us it was a pretty good experience developing for VR. We did it in parallel to the PC version so one benefits the other. We didn’t really know what we were doing, it was totally new, so we made a bunch of guesses based on our shared and collective experience and most of them turned out pretty good, some didn’t work and that’s where we learned about stuff. It hasn’t been super challenging, it’s been more exciting and interesting actually because everything is new again, even the simplest things that we are accustomed to have to be approached in different ways and as a game developer that’s super exciting. We have all the dev kits and all the controllers and one of the negative aspects of being early as we are in VR, or as we have been in our game specifically is that we didn’t get the motion controllers until our game was almost done, so we are trying to figure out how to maybe fix that so that ADR1FT will be movement controller enabled when they come out.”

And with that the time on our interview ran out. I quickly asked Adam if there was anything else he wanted to say to which he told us, “We hope that people like ADR1FT, and it’s a very different type of experience and it’s meant to be, you can finish it in one sitting if you want to.”

But then, just as he thought the interview was over, I popped up with another killer question, like some kind of interview ninja: where do you keep your ketchup, in the fridge or the cupboard? I expected him to be flummoxed, as most people are when asked this question. But not Adam Orth, oh no, certainly not Adam Orth. Without a second of hesitation he replied, totally straight faced and in perhaps the most serious tone of the entire interview. “Refrigerator of course.”

I asked him to elaborate as to why he chose the wrong option.

“It tastes better that way, It’s awesome when it’s cold. It’s the best when you have hot chips, because the hot ketchup cools down the bite for you, so you don’t burn your mouth.”

Interview and impressions based on 505 Games-hosted preview event, travel was paid by 505 Games.
Liked it? Take a second to support GodisaGeek.com on Patreon!

eSports! I joined God is a Geek all the way back in September 2013 and since then have spent most of my time on Dota 2, and occasionally posting the odd review, news article or totally wrong predictions for The International. When I am not playing Dota I can probably be seen watching some kind of strange eSport or begging for more Twitter followers (@MikeStubbsy if you are interested). Aside from GiaG I am a computing student, football coach and major Apple fanboy.
MORE LIKE THIS
>Adr1ft505 gamesAdam OrthThree One Zero