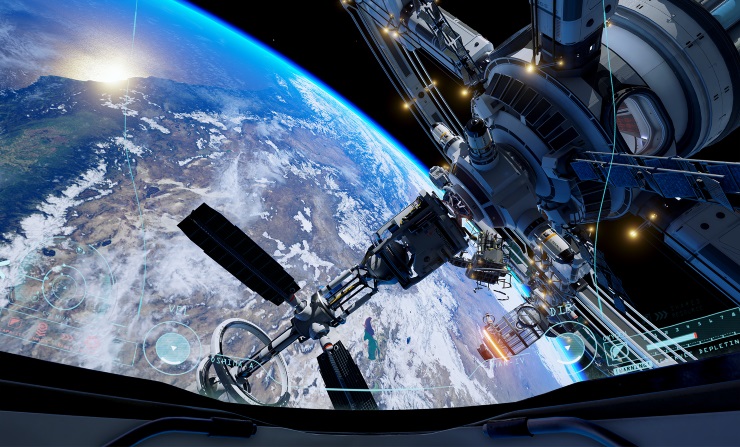 Imagine being alone in space, stranded in a partly destroyed ship, and a space suit that is temperamental to say the least. One wrong move, one slight miscalculation or, hell, even one piece of bad luck will kill you – no ifs, buts, or maybes, if you mess up you’re dead, floating in space for eternity. It’s a daunting prospect and one that should truly terrify you, even if there is only ever a miniscule chance of actually experiencing anything like it. This is the situation you find yourself in when playing ADR1FT, but somehow, despite the dire situation you are in, almost everything you see is breathtaking.

Initially you are floating in space, tethered to the remains of a damaged, yet somewhat still intact spaceship. After getting your bearings (something that isn’t exactly easy in space) you pull yourself back into the remains of the ship, where it becomes clear that a lot of work is needed to get it back into a liveable and functional shape. Fortunately you have a somewhat working space suit, equipped with thrusters to help navigate your way through space. The left stick is used to power the thrusters in a direction, while the shoulder buttons can be used to rotate yourself, and the triggers ascend and descend.

While this may look to be a wander-game, there is a central gameplay mechanic, which is the navigation itself. As you would (perhaps) expect in space, oxygen is not exactly as common as it is back here on earth, so in order to stay alive you must find the oxygen capsules floating around the ship to top up your supply. But (and this is a big but) the thrusters on your suit are also powered, presumably, by expelling oxygen, so the more you use the thrusters the less oxygen you have. This means that as you are exploring the environment you end up trying to use the thrusters as little as possible, using a small burst, and the lack of any kind of forces to slow you down to travel large distances. It also means that you will constantly be on the lookout for the small canisters of oxygen that litter the ruins on the ship. During my session I never ran out of oxygen but I came close, and was in the early stages of the game. I was told that oxygen becomes less common as time moves on, and that traversing areas becomes more of a challenge.

Of course the real reason you are playing probably isn’t for challenging gameplay. There is a story here, which from the very small part I experienced can mostly be explored through computers on the ship. The most interesting aspect, though, is space itself. There were multiple occasions where I stopped my suit from moving and just looked around at the environment, planet earth below me, and in every other direction, once you look past the debris of the ship, endless space. Often these moments where awe inspiring, and genuinely some of the most incredible visuals I have ever seen in a game, although this may have been because of the Oculus Rift (retail version, for those wondering) that was strapped to my head.

Despite being a big VR proponent, I am yet to put down a pre order for any of the major headsets because honestly, I can’t justify the expense right now. But my god ADR1FT makes me want to buy an Oculus and live off super noodles for the next month in order to do so. That’s not saying it will be VR’s killer app, but it is the best experience I have had in VR outside of Valve’s incredible Vive demos. At first the VR implementation felt a little weird, as with most VR games you move your head around as you would in real life, but that is inside a space suit helmet that doesn’t move as your head does. It makes sense in the grand scheme of things but it took a while to get used to, as did the weird field of view that felt a little small compared to real life, as rarely could you see both your arms in one shot. It’s also worth noting for those of you who don’t get on with VR too well, that of all the VR experiences I have tried this was one of the nausea-inducing ones. For the most part it was perfectly fine, but when I decided to use the bumpers to do barrel rolls it didn’t take long before I felt a little uneasy.

But being in VR is what made this experience so memorable. The extra immersive feeling that VR offers means that there are times when you genuinely think you are floating in space, and it makes the visuals so much more impressive. I fear that when playing on a normal 2D screen some of the magic will be lost, I’m sure it will still look amazing but I can’t see it having quite the impact.

Unfortunately, as is the case with many previews, my time was cut off just as things felt like they were going to kick into another gear. In the corner of my eye I noticed something floating in space and as I moved closer in it started to look like an astronaut suit, as I headed a little closer I felt a tap on my shoulder (which for the record really shits you up when immersed in VR, so please stop doing that PR-guys) and was told my time was up. With one last fleeting look into the abyss around me the headset was removed and I was back in the real world. But even now, hours removed from the experience, I wish I was back floating among the stars.

Impressions based on preview time at a 505 Games hosted event, with retail Oculus Rift hardware. 505 Games paid our travel to the event.

Stay tuned for our interview with Adam Orth.

eSports! I joined God is a Geek all the way back in September 2013 and since then have spent most of my time on Dota 2, and occasionally posting the odd review, news article or totally wrong predictions for The International. When I am not playing Dota I can probably be seen watching some kind of strange eSport or begging for more Twitter followers (@MikeStubbsy if you are interested). Aside from GiaG I am a computing student, football coach and major Apple fanboy.
MORE LIKE THIS
>Adr1ft505 gamesthree zero one