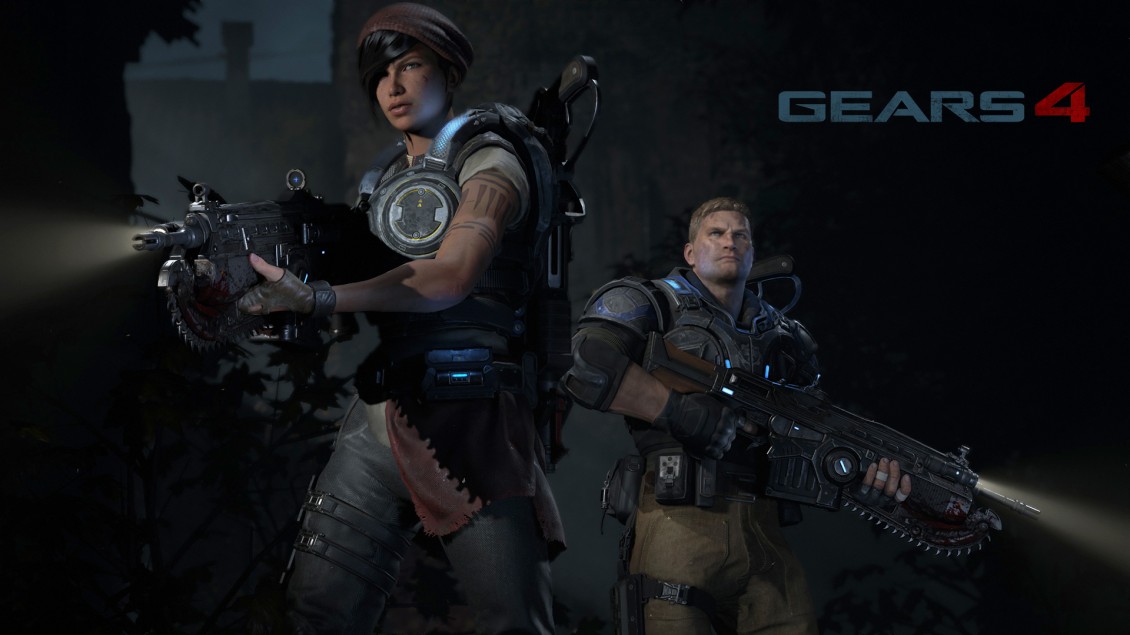 This month’s GI cover story features interviews with all of the voice cast as well as the first look at the game’s brand new protagonists. JD Fenix is the primary protagonist in Gears of War 4, and the son of war hero Marcus Fenix. Fenix is described as an “idealist” who ran away from home to join the COG only to go AWOL after a “classified incident”. Players will learn more about this incident throughout the campaign of the game.

Fenix is voiced by Liam McIntyre, who said of his character: “It’s kind of terrifying, because I get to be the lead in a new era of Gears, which is unbelievable, amazing, and exciting. I’m the legacy, because my dad is Marcus Fenix. JD’s a soldier and a bit of a freedom fighter, and in his heart he’s a bit of a renegade. He’s different from Marcus, but he’s still that heroic archetype.”

Laura Bailey plays the role of Kait Diaz, an Outsider raised outwith the walled city-states. She is described as a “capable survivalist” who isn’t quite sure how the COG works, but forms a quick friendship with fellow teammate JD.

Bailey said of her character: “What’s interesting about her is that she grew up as an Outsider, so she’s been away from this military environment that the boys grew up in. It’s fun to do her dialogue because she approaches it from a different place. She has a less technical approach to everything she does because she’s never experienced anything like this. She’s a great entry point into this world, because she doesn’t know everything about it either.”

Delmont “Del” Walker is also an ex-COG soldier and orphan, who formed a friendship with JD at boarding school. Del was also involved with the classified incident that sent both seeking refuge among the Outsiders. Walker is played by Eugene Byrd, who recently played Marcus “Boomer” Boone in last year’s shooter Battlefield Hardline.

Byrd said of his character: “Del is cool. I had to play up the nuance because the friendship between him and JD meant a lot, so getting to know [Liam McIntyre] and actually becoming friends with him helped us play together. I think Del wasn’t a clean slate, so I had to give him a bit of a backstory, but then we were able to evolve it. We’re actually building it while we’re doing it.”

Gears of War 4 is due for release on Xbox One later this year.

Currently an English, Journalism and Creative Writing student at the University of Strathclyde. Based in Glasgow, I spend most of my free time playing video games ranging from Japanese visual novels to horror games. You can contact me at greg@godsiageek.com!
MORE LIKE THIS
CastgameinformerGearsgears of war 4