previous
GOG.com adds simulator games to its library
random
next
F1 2019 gets some comparison screenshots
0 comments 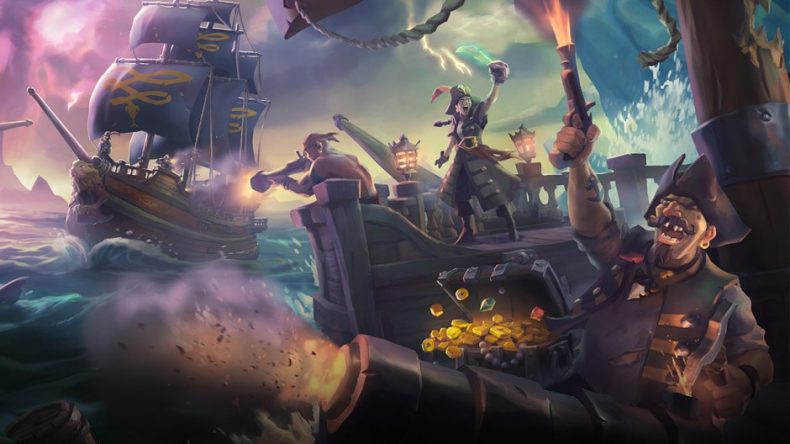 Our guide to the Sea of Thieves Tall Tales concludes below with Part Four.

To begin this Tall Tale you will need to head over to Morrow’s Peak outpost in Devil’s Roar and speak with Grace the only person (apparently) to have been to the the shores of gold. There are ten journals to find in this tale, luckily they are all located on one island called Tribute Peak, but you will have to get there first… All journals are written by Briggsy.

JOURNAL #1: I FORGOT TO STOP
This is located near the southern beach at the shipwreck of the sloop. You will need to head into the back end of the wreck and the journal is resting on the ground.

Well this is embarrassing. I’m normally a dab hand behind the wheel, and I don’t make a habit of wrecking my ship halfway up the beach. Still, what matters is that I made it here. Another first for Captain Briggsy! I should plant a flag, but all I have is these journals. I’m kind of disappointed that the shores aren’t really made of gold, but at least I won’t go blind once the sun comes up. The Shroud doesn’t seem to cover the island, just… wrap around it, I guess. That means it’s safe to explore, and exploring I shall go!

JOURNAL #2: LET’S NOT MENTION THIS
Tribute Peak is an enormous island. To locate this second journal you will need to head up the central path that leads towards the “compass” room. As you climb higher, and before the bridge you will see a ship mast with a tattered sail wedged between the rocks high above, just before this on the left is a stack of crates and the journal is resting between them.

Bah! Looks like I’m not the first to make it here after all. This stuff doesn’t look ancient, just old, and I’m sure it was made by pirates. I guess the island slips out of the Devil’s Shroud from time to time, and that’s when others came? Maybe even Ramsey got here in the end. Well, no point in sulking. I’m here now, and I bet I can find something they missed. A memento, to help remember this place. And when I tell this story, maybe I’ll conveniently forget to mention this little discovery. We’ll make it our secret, okay?

JOURNAL #3: DREAMS
Once you reach the compass room, go to your right and you will find the journal there inside a crate.

It’s still night, but I just woke up sweating. My first really bad dream in years. Maybe if I write it out, I can sleep. I was back in the tavern at Golden Sands, on the night Ramsey called parley. Trying to open on of those sealed chests. I couldn’t pick the lock. Couldn’t force it. Then suddenly, there’s the key in my hand. I smirk and throw open the lid… Nothing there. Seriously. Nothing, like looking into a chasm. A bottomless pit in a box. And suddenly, I feel hands on my back, shoving me! I think it’s one of Ramsey’s men, and now I’m inside the chest, falling – screaming out as the lid snaps shut overhead… Then I woke up. Ugh.

JOURNAL #4: NO SHORTCUTS!
On the western side of the island you will find a passageway lined with huge statues. Off to the left of those statues is a temple-like area with a number of switches you can stand on. There are some steps leading down into the ground blocked off by a cave in. The journal is located at the bottom of those steps.

This is a weird place. It looks like someone used powder kegs to blow their way down into whatever lies below this island. Maybe they managed it somehow, maybe not. Either way, the tunnel they left behind collapsed a long time ago. There has to be another way down. Ancient civilisations love putting secret passages in stuff. It’s a well-known fact! Ask anyone. Whatever it takes, I’m going to get down there. I want to see every last inch of this place before I leave!

JOURNAL #5: CLIMBING MASTERCLASS
This one is difficult to find as it is located on the arm of one of the statues and you will need to use a cannon to fire yourself onto it. The correct statue is the second one in on the right if you are looking towards the compass room, or the third one up on the left if you are working your way back from the entrance to the tomb.

You know how some people are good climbers? Well, I am a GREAT climber. That’s why I left this book up here, as proof. Well… I say “climb”. I actually used a cannon from the wreck of my sloop. But if you’re reading this, you must’ve had the same idea. This place has some amazing views, and I want to see them all! I do wish I had someone to talk to though… I hope you’re okay out there, Sudds.

The next five journals are all located inside the tomb once you have solved the various riddles to open it.

JOURNAL #6: WHY ARE YOU HERE?
Once you open the Gold Hoarder door with the coin you will see some crates on your left. The journal is inside one of those.

I am very much creeped out right now, not that I’d ever admit it to anyone. I finally made it on top of the throne and inside. I hadn’t gone far before I spotted a chest. One of the sealed ones people sometimes sell to the Gold Hoarders, but… open. It looked just like the one from my dream. Like, exactly the same. It sounds stupid but I didn’t dare go near it in case I fell in. As if I needed more clues, I spotted the Gold Hoarder emblem on a door, too. So. They’ve been here before. But why?

JOURNAL #7: WHERE THE GOLD GOES
You will need to make your way down the stairwell. At the bottom you will see a mermaid statue, follow the right hand side round and the journal is resting on a rock near some glowing mushrooms

I don’t like Trading Companies. There were none when I first came to the Sea of Thieves, young and cocky as I was. I don’t blame people for working with the Gold Hoarders though. If you’ve found a chest you can’t open, why NOT take it to them? Well… Maybe because we should have been asking ourselves what they do with the treasure afterwards, when we’ve walked away. I think it comes here. I think it ALL comes here. That’s why this place is called Shores of Gold.

JOURNAL #8: I ONLY WANTED ONE
You will need to get past the balance beam section of the tomb, and before you move onto the next area check the crates on the left hand side.

I’ve made a huge mistake. I only wanted a little thing. Just a keepsake, something to prove I’ve been here. Just one little trinket from a treasure pile. I don’t feel sick, or cursed. I feel great! And that’s bad, because I haven’t slept or eaten in days. There’s a different kind of feeling inside me now, though. I don’t like it. I don’t understand it. But I know it’s getting stronger.

JOURNAL #9: ANSWERS
One of the trap rooms has a number of spikes in it as well as three levers. The ninth journal is in this room resting between some rubble on a wooden platform. You will need to use one of the torches to climb up there.

He was waiting for me, just as I expected. I thought he’d attack, but he seemed to understand. He says I can’t go back. I’ll be an outcast. A target. I know he’s right. If I agree to serve, he’ll share a cure one day. He’s probably lying. But what choice do I have? Briggsy died on this island, and I’m all that’s left.

JOURNAL #10: A LAST ACT OF FREE WILL
From the previous trap room head up the path and you will find a raised platform on the right hand side. The journal is resting on a crate up there.

I was commanded to destroy the relic. He doesn’t want pirates reaching here unexpectedly, when he might be sleeping. I have disobeyed. If there really is a cure for… what I am, now… I might need the Shroudbreaker to find it. One day. Instead, I’ll hide the gems that seem to focus it’s power. I know plenty of old places to keep them safe from fleshy fingers. The Shroudbreaker can go back to sleep in its vault to recharge. And I’ll start gathering treasures for him, as ordered. I’ll be a slave. I’ll be a villain. I’ll be a monster. At least now I know what the feeling inside of me is. Shame.

Part Three: Wild Rose and The Art of the Trickster