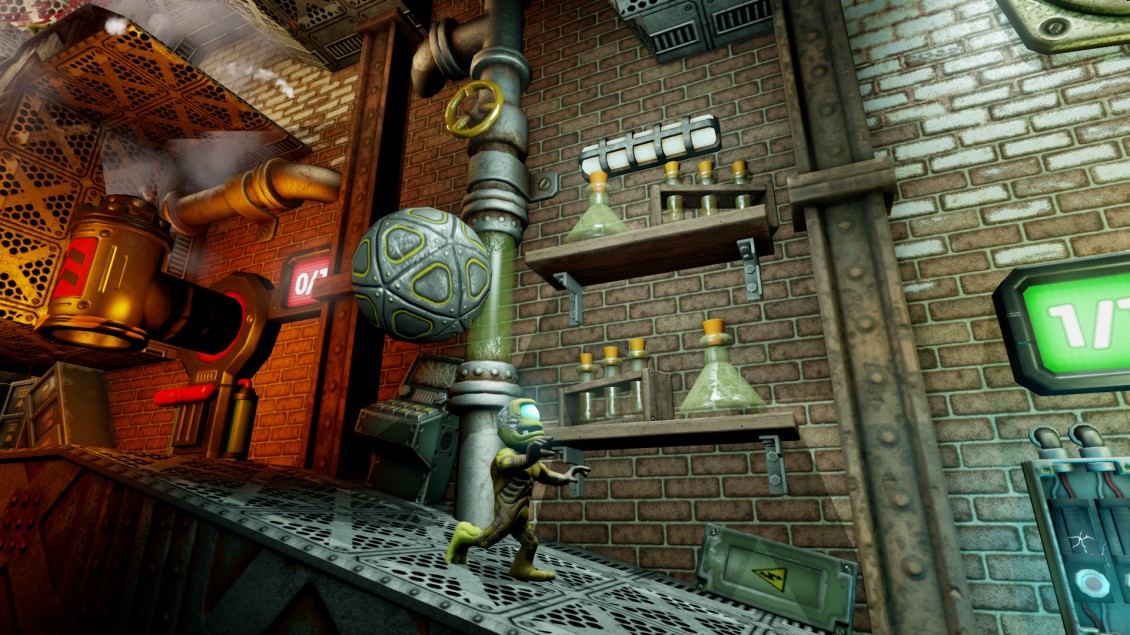 Death is a strange concept, isn’t it? We’ve all thought about death at one point or another in our lives. Maybe people close to us had passed; maybe people we hated had passed; maybe celebrities who we had a great affinity for have died. Maybe we’ve all stood on the edge of something really high up, a shearing cliff face with jagged rocks and unrelenting tide below, perhaps. Maybe the precipice of an unimaginably tall building, and we’ve had the overwhelming urge to have a little peep over the edge just to try and process how high up we actually are, and how long we’d fall before meeting the ground. Death is something incredibly nuanced and hard to quite express and imagine, as Tyrion Lannister said: “death is so final whereas life, life is full of possibilities.” Death is a complex concept that, while at the centre of 101 Ways to Die, isn’t really explored too much at all.

Explained in the very pretty opening comic strip, Ernst Splattenfuder, a mad scientist, has spent his entire life devoted to finding new and elaborate ways to kill and maim. Just as he completes his decades of work and has his tome of killing methods written, one of his creation inexplicably drops a bomb and blows his work to smithereens. You, as the player, are here to rediscover his life’s work, to rediscover the 101 ways to die.

What that entails, exactly, is that the player has to set number of given booby-traps through out an already existing and dangerous environment in order to kills “splats” (the scientist’s creation) in creative ways in order to complete challenges and earn stars, which then unlocks harder levels. For instance, in the first level after the tutorial area, you are given a mine and a bumper (which hurls a splat into the air in a direction of your choosing) to play with in order to kill a single splat. You use these tools to throw the splats onto a pit of spikes, into the path of a harpoon, a big fan or another bomb. You manipulate the surroundings with the tools given to murder the splats in the most gruesome of ways possible.

This sounds as if it should be quite fun, a murder simulator in which you can unmercifully slaughter minions in their hundreds – what could go wrong? Well, quite a bit, really. It certainly can be satisfying when you line up everything perfectly and the bloody death unfolds like clockwork, like a beautiful catastrophe set to classical music, in front of your eyes. The grim, bloody mess left behind tells you the job has been well done. You feel like a top class murderer. But the kerfuffle it takes to get to that stage isn’t really worth it.

Aside from each area having quite a drab aesthetic with little atmosphere to speak of, it can be frustrating when trying to line up scenarios to complete challenges. I’d spend ages meticulously lining up bumpers so these unsuspecting Splatts bounce off each one, onto a bomb, and then into a fiery pit of doom. All for the little green bastards head to bang against a wall and have to go back to the drawing board. There is a reset option in the pause menu, but reset not being mapped to a controller button just increases that time before you can have another attempt, allowing the frustration to linger. Also, I found a problem with these challenges: you need to complete all of them to collect all three stars which adds to your total and unlocks new levels and areas, but the need to complete these challenges nullifies the creativity in the killing. What should be a sandbox of cruel death, in which you come up with new and unique ways to end life actually lacks individuality and creativity. It encourages you to follow the line to succeed, which isn’t a good outlook.

Since the amount of stars you have to have to unlock new levels is quite harsh, you can be left stranded on levels you find difficult for quite a while until you finally discover what you have to do. I’m not saying that the challenge is poorly placed, it’s actually very satisfying when you finally find out the solution, but being unable to take my eyes of a level and try something new is annoying.

So while 101 Ways to Die can certainly be fun and satisfying, the lack of atmosphere and frustrating build up of the areas left me sighing with frustration, and punching my desk in anger instead of punching the air with jubilation. It’s not a bad game by any means, just one that’s a tad uninspiring.

Can be satisfying.
Some fun ways to kill fools.
Plenty of levels.

Lack of atmosphere and character.
Frustrating and confusing.
No reset button on controller.

A death simulator which somehow makes killing annoying little Netto minions actually a frustration, rather than the joy it should be. While it can be fun at times, the awkwardness of setting up the levels, lack of atmosphere and character make it a rather underwhelming experience.