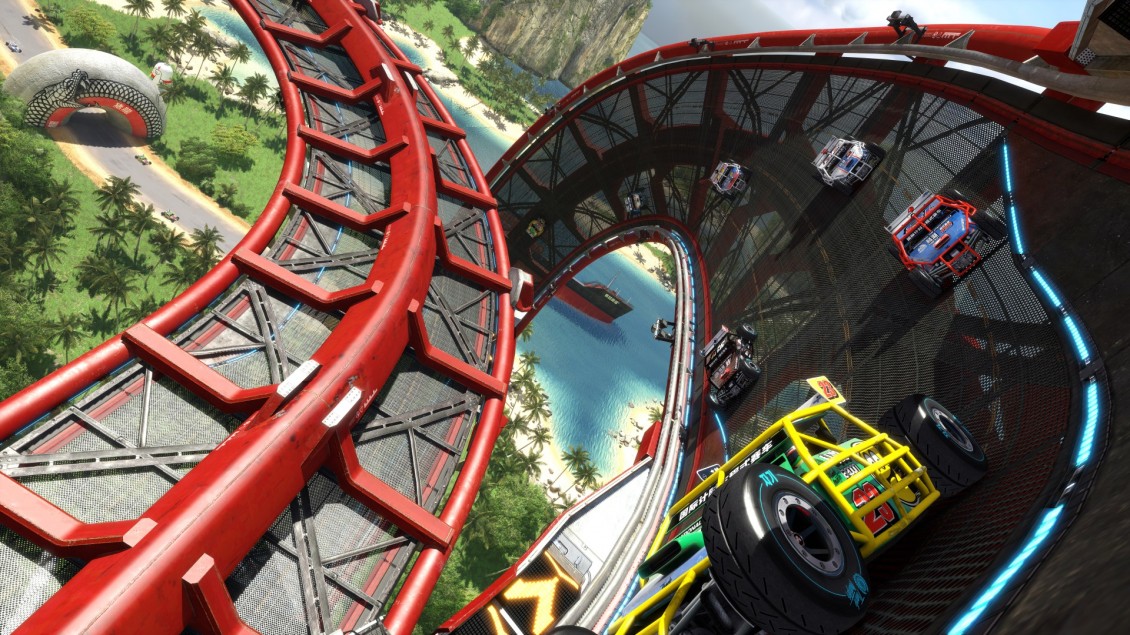 The Simple and the absurd don’t normally go together, but TrackMania Turbo harnesses both in such a wonderful way that it’s hard not to get swept up in its high-octane racing. The very moment a helicopter dropped me from a dangerous height onto a vert ramp that then sent me flying toward a u-turn requiring drifting skills akin to those you’d see in the Fast & Furious movies, I knew the combination just felt right.

That ludicrous visual of a massive supercar hurtling toward the track for a rolling start isn’t something you normally see in driving games unless the characters are blue rodents or Italian tradesmen, but the gameplay has been stripped back to a very simple form where you essentially only do three things: accelerate, brake and steer. The complexity comes in managing all and perfecting your drifting. Sweeping hairpins are commonplace over the 200 tracks on offer and the vehicles handle differently, making it important to know how to weight a turn as valuable seconds can be lost if there’s an error in judgement.

The reason for this is that it’s a score attack game for all intents and purposes: it’s you against the course with split times being the number one enemy. Prior to each race, you’re given the option to jet around on your own, or with a pace setter. These ghost cars can’t distract you from your record setting time, nor are they meant to. They’re merely giving you the speed in which to enter a corner, the racing line that’ll serve you the best and how to take a jump if you’re not looking to end up hurtling off the elevated track and spinning your wheels on a sandy beach, below. Start off small and drive with the bronze spectral car, then try the silver buggy, before really aiming high and attempting to match the F1-like vehicle’s four-wheel expertise and take home the gold. This is a terrific, optional guide that gives some valuable pointers across some of the later, more unforgiving courses. Track variation definitely steps up a gear in the later stages, but with simplicity at the forefront, there are a lot of easy ones early on. Very rarely will you be stretched to your limits and nine times out of ten, you’ll easily pick up the bronze medal before moving on to the next challenge. It’s still fun because of the sheer adrenaline rush as you tear up the concrete at ridiculous speeds, and once you’re in control of a vehicle, knowing its every nook and cranny, it’s one of the more satisfying thrill rides in quite a while.

And it needs to be when most of the tracks are done and dusted in thirty-to-forty seconds. That’s not a complaint; the more focused courses are where the game shines rather than the three lap efforts that feel like they’re outstaying their welcome slightly. Diving into a course first time and not having a map on screen to tell you of upcoming chicanes, or jumps, is also an annoyance that I could do without. One-shots, though, capture that “one more go” urge superbly. Thankfully, like other titles across a number of genres where time is the key to success, resetting to the track, or restarting a race is a simple press of a button and the waiting time is instant. This is why it’s so simple to spend five minutes on a track that is looking for a thirty-two second run when going for gold. With the multilap races lasting three or four times longer on a standard run, the urge for another quick go just isn’t quite there.

Of course, being a Trackmania title, it has a strong reliance on multiplayer, and while you won’t race against your pals on the same screen, the real time aspect of going at it for a few minutes per track and seeing who is best is terrific fun. It’s simple: creating a room is easy, and you and up to 100 people can be racing on the tracks at any time, before your time runs out and you move to the other one. Whether it’s a simple race, or a stunt race (where you can gain boost by doing tricks from ramps, and jumping with the right stick), there’s plenty to do for everyone, and ranking you down the smallest geographical location means you’re always wanting to accelerate up the leaderboards, even if it’s just the local one to your part of the country.

Simplicity is what makes Trackmania Turbo so refreshing, and is it’s downfall on the longer tracks. Yet, the death-defying jumps and breakneck speed on the shorter efforts are where everything comes together. Hammering the roads while some banging tunes are playing is exhilarating. There’s even a button to turn up the music: the weirdness of Trackmania is alive and well here.

Simplistic, yet exhilarating gameplay.
Pace-setters are a terrific idea.
There’s a button to turn up the music.

Longer tracks tend to outstay their welcome.
Loaded with too many easier tracks in the early stages.

Speed and simplicity is what TrackMania Turbo offers in abundance, capturing that one more go mentality, really well.

Trackmania Turbo is having an open beta this weekend