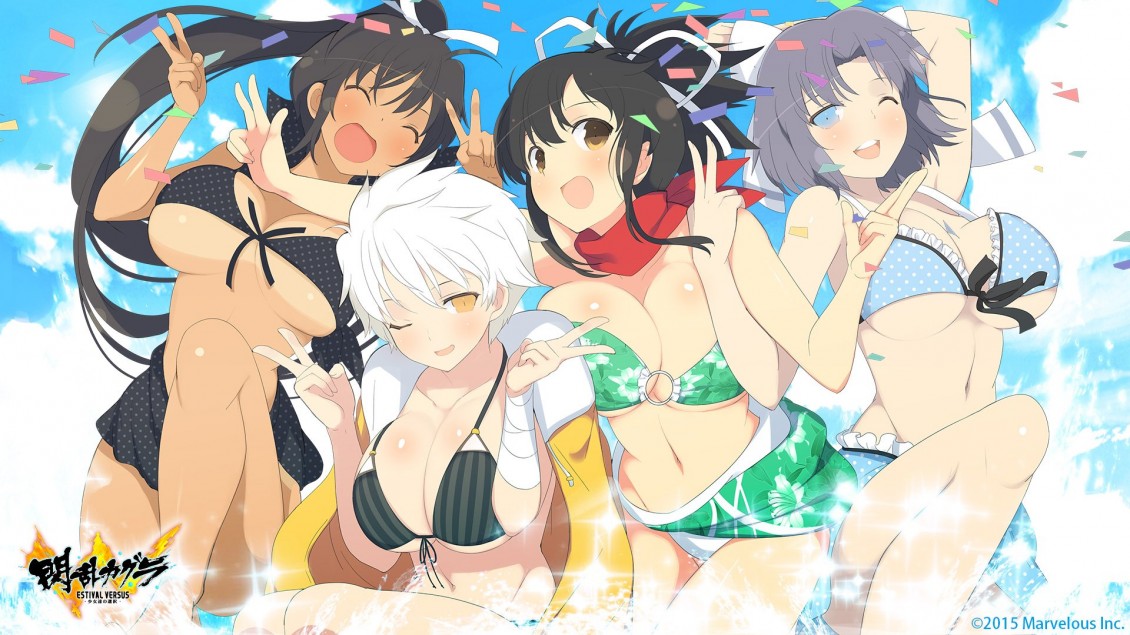 Dragon Quest Heroes got me into Musuo (or Warriors) games, and I’m glad I gave them a shot because I’ve found myself enjoying this style of gameplay down to them being relaxing and just plain fun. I haven’t played the Senran Kagura games on 3DS, but the Versus games on Vita and now PlayStation 4 have impressed me enough to warrant a purchase of Senran Kagura 2 on 3DS just a few days after starting Estival Versus.

Just like with Hatoful Boyfriend being viewed as the opposite of a true game, some people seem to view the Senran Kagura franchise as a joke with nothing more than anime tits. Estival Versus proves that the anime T&A are the icing on a Musuo cake which offers loads of memorable characters, and much improved visuals and performance on PlayStation 4. People may buy this for the cover but they will stay for the combat, story, and characters.

Estival Versus starts with a fully voiced anime cutscene involving Ryōbi and Ryōna, and this is where you’ll notice how great the move to PlayStation 4 has been. Characters in-game almost look as good as they do in cutscenes and the production values have been increased a fair amount as well. Plot-wise, I’m reminded of your average lost-on-an-island TV show with some supernatural phenomena thrown in. Something occurs when Ryōbi and Ryōna are mourning their fallen sister which transports the Shinobi of rival schools into a parallel universe on a summer island. The girls from various schools face off against each other while trying to achieve the highest honour of being able to finally put their loved ones soul to rest. Spread out over eight days, the Kagura Millennium Festival will see you playing as nearly 30 different characters. You’re able to experience different sides of the story from the perspective of rival schools while fighting characters you may have played with in earlier missions. This lets you master nearly all the fighting styles as each Shinobi has her own style ranging from slow tanks to ranged fighters. You can also Shinobi Transform by pressing L1 which results in a very character-focused cutscene involving undressing with choice camera angles, as well as Frantic Transforms that make you more powerful but slow you down and make you take more damage.

Progression happens via missions that are separated by cutscenes and visual novel style story segments, all of which are fully voiced in Japanese. While you do have the ability to skip all story cutscenes and dialogue, there are some things you can’t skip: like the way a battle ends and near-full nudity with appropriate location censored visuals.

Senran Kagura Estival Versus is essentially Shinovi Versus but with more of everything good and the bad mostly removed. The difficulty is now balanced and I had some trouble with even the grunts in Hard mode, let alone bosses. Visuals look great on both PlayStation 4 and PlayStation Vita with the home console version both excelling in the resolution, enemies on screen, and frame rate. More on the differences between both versions in a bit.

Barring the main story that takes place over the festival, there are challenging Special Missions that are unlocked as you progress. These Special Missions felt like too much of a grindfest for my liking, in comparison with the rest of the game. The Shinobi Girl’s Heart missions are unlocked by destroying Festival Platforms across the main story and these are essentially side stories for the girls. There will be some character development as well so I recommend destroying the platforms when you come across them. Outside of the missions there is a shop that lets you buy music or visuals to view later in the Library, as well as accessories for the girls to use in the Dressing Room. The Dressing Room lets you exploit the girls to your heart’s content. You can have them dressed in a variety of outfits, with tons of accessories and even use virtual hands to poke them. There’s also the Diorama that lets you put 5 girls (3 on the Vita) together with changing environments and tweak their expressions for taking screenshots. Basically there’s a good amount of stuff for you to do while taking a break from the main missions in Estival Versus.

In my time with Estival Versus for review, I spent nearly the same amount of time with both versions and used cross-save to transfer my data and replay some missions to see how performance was impacted on the Vita. The PlayStation 4 version runs at 60fps which is great in this kind of game while the Vita version runs at 30fps. There are some other drops across the Vita, but nothing which renders it unplayable. There are also a lot more enemies on screen on the PS4 while the Vita version displays a lower number, with others popping in as you move around the level. The Dressing Room is operated using the touch screen on Vita, so there are no virtual hands like in the PlayStation 4 version. Given a choice, I’d recommend the PlayStation 4 version. Everything looks and runs better and it’s easy to see the benefits of jumping to more powerful hardware for the franchise.

I’ve come to associate each girl with her voice actress at this point but would still have liked the option of English voice acting, however cheesy it may have turned out. Estival Versus dialogue is as self aware as the creator Kenechiro Takaki is about what he wants in life. I tried the online mode everyday over the last week and didn’t manage finding a single challenge which does not bode well so keep that in mind if you plan on playing online. While it is great having a Vita version and PlayStation 4 version, I wish the Vita version performed a bit better.

There’s no denying the fact that there is an audience that enjoys these games. If the stripping at the end of battles or cheesy and perverse dialogue are things that annoy you, there’s enough to warrant passing on this game. For anyone with an open mind looking for fun gameplay and dialogue that makes you take more screenshots than anything, Estival Versus is an easy recommendation. Enjoy summer in your hometown. I know I did.

Performance issues on the PS Vita.
Reused areas from Shinovi Versus.

Senran Kagura Estival Versus is an upgrade from Shinovi Versus in almost every way, able to hold its own with its silly but memorable characters, expansive content and solid entertainment value.