Day of the Tentacle Remastered Review 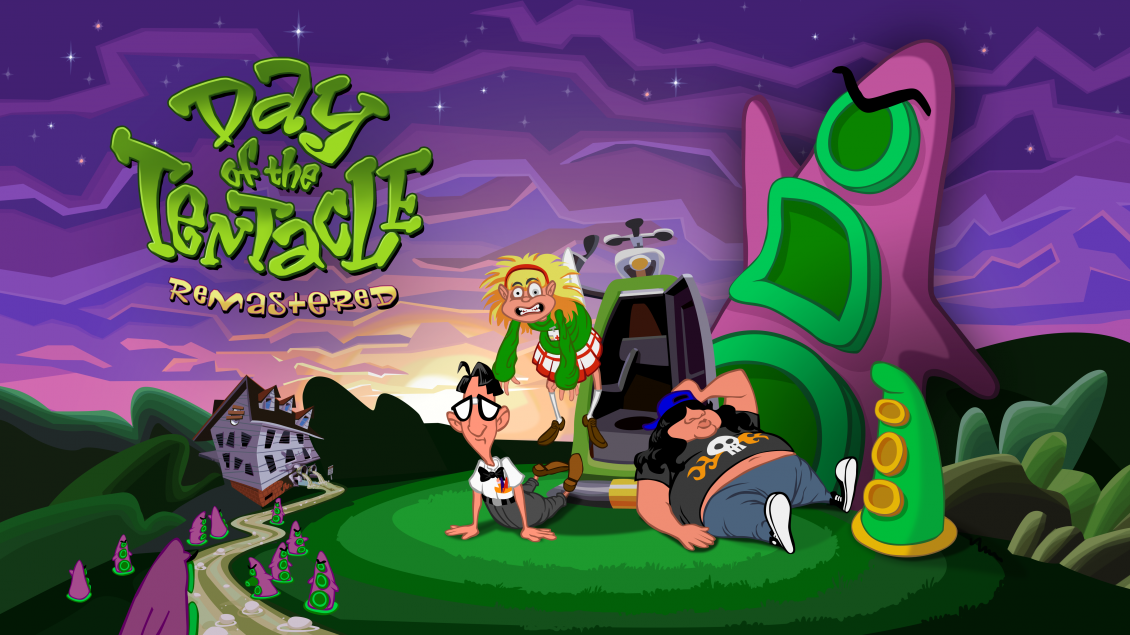 Following on from the overwhelmingly positive reception to last year’s remaster of Grim Fandango, Double Fine has wasted very little time in returning with another reworking of an all-time classic Lucasarts adventure game. Originally released all the way back in 1993, Day of the Tentacle is perhaps the funniest and most user-friendly of all Lucasarts’ point and click efforts and the adventures of Bernard, Hoagie, Laverne, Dr.Fred, and the evil Purple Tentacle have stood the test of time and still make for a hugely inventive, genuinely hilarious trip filled with great characters, brilliant voice-actin,g and well-designed puzzles.

After drinking toxic sludge being pumped from Dr. Fred’s laboratory (hey, what kind of a scientist would he be if he wasn’t poisoning the environment with toxic sludge?) Purple Tentacle (Dr.Fred’s lab assistant) develops an unquenchable thirst for world domination. In an effort to quickly solve the problem, Dr Fred attempts to kill his suckered assistant but is stopped by lovable nerd Bernard Bernoulli (a cracking turn by Richard Sanders) and his housemates, the deranged, lanky, pop-eyed Laverne, and hilarious, stoner-roadie Hoagie. Purple Tentacle escapes to realise his plans for world domination and it’s up to our three heroes, travelling through time in toilets and flushing items of inventory to each other, to save the day.

Taking control of Bernard in the present day, Hoagie 200 years in the past and Laverne, deposited 200 years in the future, the action takes place in and around Dr.Fred’s motel/lab and charges the player with switching between characters to solve its puzzles and return the world to order. Upon its original release this sequel to Ron Gilbert’s ground-breaking Maniac Mansion (fully playable here) was lauded for avoiding some of its genre’s negatives, such as player character deaths and the tendency to have investigation lead to frustrating dead ends, and it’s true, Day of the Tentacle did away with a lot of the frustration of some point and click games. Its puzzles are, for the most part, fairly straightforward. That’s not to say there isn’t the odd one that’ll stop you in your tracks but things are easier to piece together and less obtuse than in some of the other old Lucasarts adventures.

And it’s in the clever design of its setting that Day of the Tentacle achieves this. The motel which serves as our backdrop here is a tightly designed, easy to navigate space that changes just enough between the present day, future, and past settings to avoid repetition setting in but is still recognisable enough to make going back and forth easy to navigate.

Reacquainting oneself with Bernard, Laverne and Hogie has been an emotional experience and I’ve been genuinely surprised at how much I remember from my original playthrough, all the way back in the 90s. The jokes and writing are as funny as they ever were, Hogie is still awesome, and standout scenes, such as all of those involving the Founding Fathers, are still as cracking as ever.

This remaster has been lovingly handled by its original creators and the team at Double Fine has been careful not to mess with one of the game’s biggest draws, its beautiful, Chuck Jones-inspired cartoon visuals, which have been newly hand painted and sit wonderfully alongside the remastered audio and voice work, helping the game to achieve the magical task of looking and sounding as good as you think you remember it did all that time ago.

Players can now switch between the original pixel art and the new high resolution graphics at the push of a button, as was the case with the Grim Fandango remaster, and it’s possible to mix and match the graphics, audio and user interface between the new style and classic to find your preferred setup. I personally am a big fan of the new verb dial as opposed to the clunky old verb bar of the original, and this is an option that also controls really well with the DualShock 4 in particular, good news for anyone worrying about the controls on PS4. Achievements have also been added and are genuinely fun to try to unlock, a full playthrough garnered me just over 50% of them and, although I’m no big fan of hunting down achievements, they’ve been well implemented here.

Double Fine has done another great on remastering a classic, delicately updating it in such a way that what stood out in 1993 stands out all over again more than 20 years later. Recommended for a strong hit of pure nostalgia if you’ve been there and done it all before, it’s still easily a strong enough game that new players will find more than enough to love should they take the plunge. Day of the Tentacle Remastered is no imitation diamond, it’s the real thing.

As funny and fun to play now as it was in 1993.
Remaster gently enhances the beautiful cartoon style of the original artwork.
Cross-buy support for PS4/Vita.

Some tough puzzles may stop you in your tracks.
Slight sound delay on one or two occasions.
You can see Hogie’s asscrack much more clearly in high def.

Double Fine has done another great on remastering a classic, delicately updating it in such a way that what stood out in 1993 stands out all over again more than 20 years later.

You may also like
Day of the Tentacle RemasteredDouble Fine