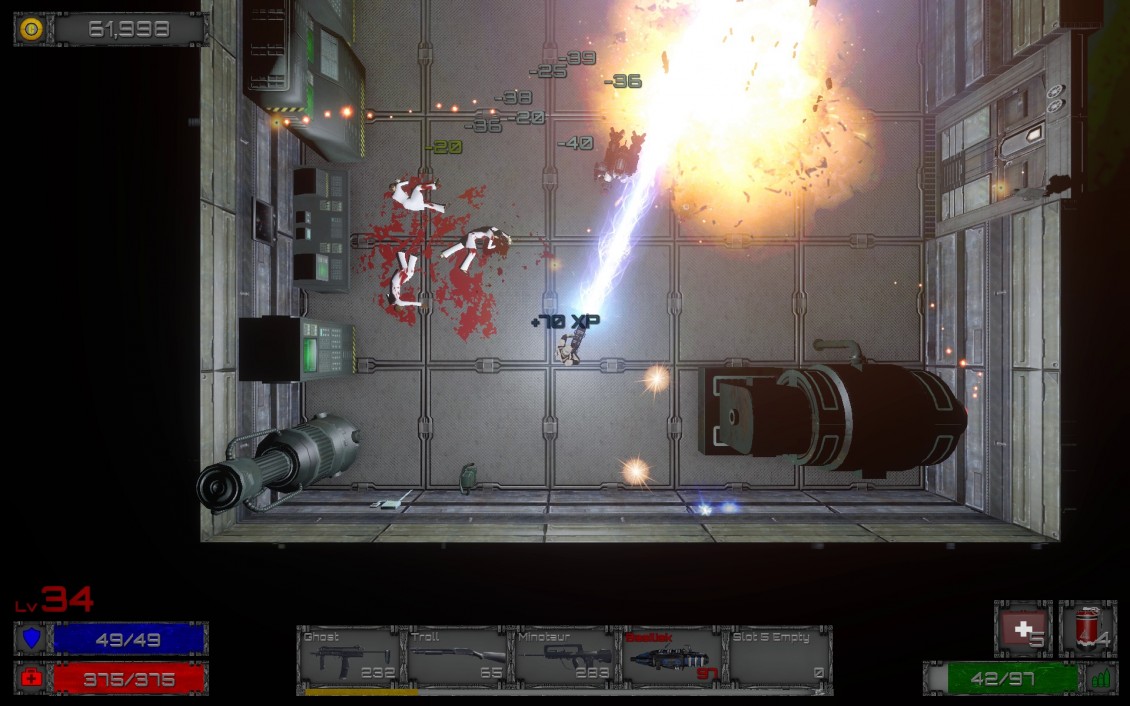 The premise for Ares Omega sounds like an interesting one, but when you actually get down to the nitty gritty of what the game offers in terms of variety and gameplay, you’ll find that after an hour or two any interest you may have had has already started to wane. You are sent to a military base on Mars where an army of self-aware robots have started a rebellion and have no intention of surrendering. There is no real story, and the character is no more than a vessel for the destruction of a vapid, robot army which isn’t necessarily a bad thing; the game would rather sacrifice a narrative for action, explosions and all-out warfare. Through procedurally generated levels you’ll fight a selection of robots and attempt to take back control of the facility, but after the monotony kicks in, you’ll struggle to care. Even with the boss fights, Ares Omega does little to keep you entertained.

Ares Omega is a top down rogue-lite shooter and it gets the basics right. The controls are pretty standard, using the WASD to manoeuvre the map and the mouse to fire at your metal-bodied bad guys. As the game progresses, you’ll find plenty of different weapons, and by finding money in containers scattered around the map you’ll be able to buy new gear and weaponry at the loading screen. It’s pretty standard in terms of progression, offering three skill trees to improve your generic protagonist, but the improvements never feel as profound as they may do in other games that adopt this mechanic. When you die, you are given your stats for that turn so when you go back in, you do have a new goal to reach: survive for longer and blow more shit up. It’s hard to appreciate the look of Ares Omega, with the level design adding to the repetitive nature of fighting through the facility. It never feels like you’re progressing because of the similarity between each zone, and the robots aren’t too varied either. There doesn’t seem to be any real consideration put into wanting the player to persist or return to the game, and after blowing up the same cockroach-like robot for the millionth time, it will start to grate on you. Saying that, the loading screen and the overall look of the game does have certain nostalgic warmth to it, harking back to late 90s shooters you’re probably familiar with.

There are a few other irritating problems which may quell some of the enjoyment you’ll have with Ares Omega. If you need to use a medi-pack in the middle of an intense gunfight, you’ll find it near impossible. Whenever you use one, your character will remain static and unable to use any weapons in the process, allowing the robots to fire at you with ease. It sounds like quite a small complaint, but with almost every game that allows self-healing, you can move whilst doing so. You have a shield, but it deteriorates quickly and once it’s gone, you’ll find your health follow a similar path. Selecting weapons can be annoying as well, and if you don’t have a decent armory, it can take some time to destroy a single enemy. Granted, this does add to the difficulty of the game, but it also adds to the frustration. If you find the main campaign tedious and want to try another mode, you can’t, because there isn’t anything. In some games it’s acceptable because the one mode they have is engrossing enough, but when you have a single player game like Ares Omega, you may feel a little short changed. There are positives to Ares Omega though; if you like this sort of game anyway, the challenge to survive will be enough. The controls are responsive and effective in ploughing through the campaign, and you’ll never find an issue with aiming at your enemies or getting from point A to B.

One element that could have been added to make the game immediately better is multiplayer, but there’s no co-op mode or online challenges to compete in and the lack of competition or camaraderie is sadly missed. Even a chance to compete against other player’s scores would have been a nice feature, but there is nothing.

Ares Omega will appeal to the few, but overall you’ll be done and dusted after a few hours. I found the repetitive nature of its campaign and no multiplayer features its biggest disappointment, but there is still a challenge to be had in the tough as nails difficulty.

No multiplayer features.
Repetitive combat.
No variety outside of the main campaign.

Ares Omega provides a challenge, but it lacks anything outside of its vanilla campaign and repetitive combat.