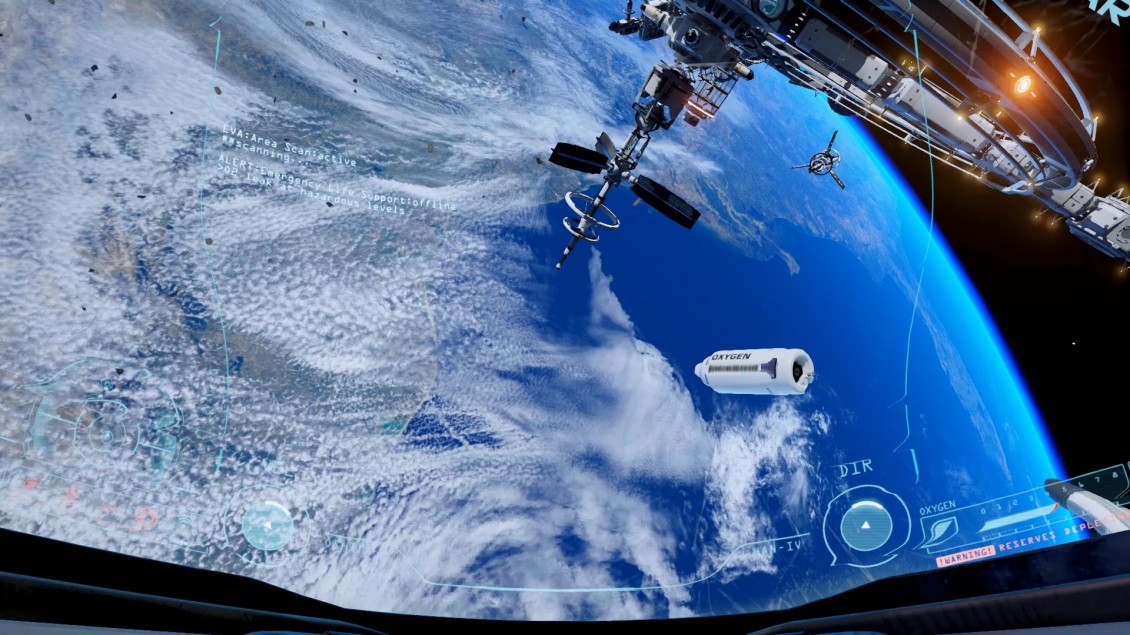 Those of a certain generation will remember the saying “it’s a funny old game”. It was used to describe something that created a response of confusion, and I say this because confused is exactly how ADR1FT left me feeling. Three One Zero has succeeded in creating an atmospheric, realistic (I imagine) space-walk simulator, but in trying so hard to remove the potential labeling of it being “not a game”, have added mechanics to make it more gamey that are actually to its detriment.

The premise is simple: Alex Oshima has awoken in space, and the massive orbiting station she is in charge of has seen some sort of catastrophic failure and is in bits, with large sections of it broken up and drifting into the eternal blackness of the cosmos. Her suit is her survival, but it’s leaking oxygen, and thus we’re introduced to the first (and being brutal, the most unnecessary) mechanic: your space suit uses oxygen to move. Thrusters (and later boost) all use the same shared oxygen resource as your breathing (which seems like a major design fault, really) and so you are floating about the station (and indeed, space) very slowly. We’re talking more than a sedate, leisurely walk here: this game makes Everybody’s Gone to the Rapture look like Vanquish. You control Alex much like any other first-person game, only you can move up or down with the triggers, rotate yourself with the bumpers, and centre yourself (you will often mistake up for down as you lose yourself to gravity) with a click of the left stick.

But already, I find myself conflicted thinking about this game, because the pace is absolutely important for the location – the sense of place is vital. Space is a vast empty location, perforated by only the debris and objects that have escaped from the station itself. If you were able to zip around quickly, it just wouldn’t work. But it feels like a singular, uncompromising vision towards the end, with the space between objectives becoming larger, and thus the need to replenish oxygen getting quicker and, in theory, more tense. I say that because by the end I was frustrated by design decisions and wanted to explore this gorgeous space station at my own pace, not with a constant “energy bar” (which is what your oxygen bar is, when all’s said and done) running down with everything I do. At points you will flick the stick forward to propel yourself just a slight bit, before leaving Alex floating forwards, watching distant objects move toward you. It’s achingly slow, and any effort to speed things up will punish you by using your oxygen that bit faster. ADR1FT wants you to feel enraptured by the surroundings, there’s no doubt about it. And it’s such an odd decision, because there are oxygen tanks floating about nearly everywhere. In fairness, they’re pretty expertly placed, and if you’re heading in the right direction (ping the map by clicking the right stick in, all thanks to your clever suit) you’ll almost always find a tank somewhere. On top of that, inside the station there are machines that can fill your tank entirely, and also machines that can repair it, which actually is related to one of the most frustrating thing about the entire game: the constant bumping into things.

ADR1FT is one of the best looking games I’ve ever played. I actually gasped at some of the scenes on screen. This is how I imagine space to look. Blistering reflections upon the glass of my helmet – the texture work is astounding, and although once or twice some debris would appear in front of me (rendering in as if to remind me it’s a game), it’s breathtaking; exactly as space should be. As you exit the station and the beauty of the earth is seen for the first time, it’s almost enough to make you well up, reminding you of how insignificant you truly are. There are lovely moments of attention to detail relating to the passage of time, as the earth will change from greens and blues to neon yellows as everyone turns their lights on in the evening. As Alex’s shadow is cast upon the clean white station, it’s easy to be wowed over and over again at the visual creation. Bubbles that are broken out of their locked containers float and hit you, bouncing away, and leafs from the plant life will stroke across your glass window onto this world: honestly, I cannot say enough good things about how it looks.

But this makes it all the more frustrating that for the entire four hour runtime, I never got a handle on how tall or big Alex was. As doors open and areas become more tight to get through, she would bang and bump on every single door or item in the vicinity, sometimes knocking off parts of the oxygen bar. I’d feel like I was going straight through the middle of a doorway, but no, for some reason she’d be grunting as her legs were “hurt” by knocking into something. I don’t know if this is due to the game being VR-capable, but the view is restricted by the helmet in a way as to be beautifully cinematic, but also stop you from ever seeing your legs in any controlled manner.

Then there’s the story, oh boy. I want to be careful that I’m not over-analysing here, but the fact creative director Adam Orth has been on record talking about how the game is a personal story, based on his experiences at Microsoft mean that (unless I’m mistaken) the story here is laden with similes, and, at times, feels very unapologetic. A machine reading the words “always online” were very jarring, and a heavy implication that the person at fault for this space wreckage was just toeing the company line and doing their job, and also quite a driven person – I don’t know, but it feels a little too on the nose for its own good. Much of this is doled out through audio and computer logs, and the characters seem interesting but never fully fleshed out, though perhaps if you find all of the collectibles you’ll know more, but that means exploring a vast area at a very slow pace. Basically, it’s a problem.

All of this adds up to a game that, even now, I feel conflicted about. My wife would walk in the room and stay, because it looked so incredible, but then I’d die because I ran out of air through a combination of bumping into things, and misunderstanding the map icon on a very busy UI, and she’d get frustrated and leave. So much of the actual game is busy work, going from place to place and rebooting systems, and on the third time it feels too much. The refusal to accept ADR1FT being part of the “walking sim” crowd has made it less of an easy recommendation, but a recommendation nonetheless, because although it can be frustrating, it’s hauntingly beautiful, and a sensational example of how a well crafted environment can be enough to pull you across the finish line. For all its missteps, I wanted to see the credits, and I’m glad I did.

Pace will be unbearably slow for some.
Story is a bit too on the nose.

The refusal to accept ADR1FT being part of the "walking sim" crowd has, weirdly, made it less of an easy recommendation, but a recommendation nonetheless, because although it can be frustrating, it's hauntingly beautiful, and a sensational example of how a well crafted environment can be enough to pull you across the finish line.

Grow: Song of the Evertree review
Evil West | 6 Tips to get you started
Pokemon Scarlet and Violet Legendaries | How to find and unlock Legendary Pokemon
The Devil in Me | How to keep everyone alive
The Devil in Me | How to kill everyone
Escape Academy: Escape from Anti-Escape Island Complete Walkthrough
Escape Academy Take to the Skies Walkthrough
Social Media
SUBSCRIBE
All content copyright GodisaGeek.com
Fonts by Google Fonts. Icons by Fontello. Full Credits here »
Posting....