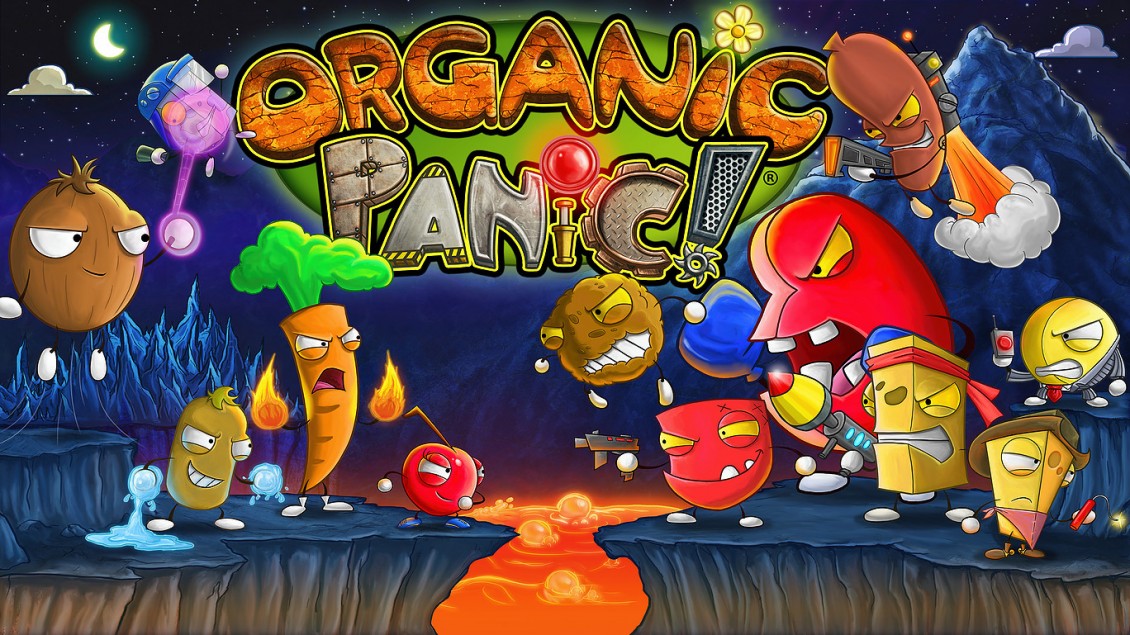 Have you ever stood in the meat aisle of your local supermarket deciding whether to have a nice lamb dinner or a beef wellington for tea, when you think to yourself, “What if humans didn’t exist, and these meats decided to take over the world, threatening fresh produce everywhere with world domination.” No? Well, it’s a question I have asked myself countless times and now, thanks to Organic Panic, I can finally find out.

Throughout the course of the Adventure Mode, you’ll play as a selection of organic fruits and vegetables trying to liberate their kind from a band of evil meats and cheeses; it may be a concept you’ve never heard before, but it’s one you’ll most likely never forget. The story falls short of anything worth following, but by the second stage you won’t care because you’re having too much fun.

It’s clear to see Last Limb has taken inspiration from plenty of different games. For starters, each stage is linked by a rather cheesy comic strip in the same vein as Angry Birds, and all your characters have unique abilities that must be used in unison if you are to find the portal at the end of each level. Although it does bear some similarities with Angry Birds, LittleBigPlanet and Cut the Rope, Organic Panic is able to stand alone as a smart, vibrant physics-based puzzler. I was surprised by the amount of fun I had playing, mainly due to the cleverly designed physics system. Last Limb has created an engine called D.A.F.T. (Destructive and Fluid Technology) which allows you to manipulate and destroy the majority of Organic Panic’s 200 levels, as well as the naughty meat and cheese empire along the way. The four characters you play as (a kiwi, coconut, cherry and carrot) each have their own abilities and, depending on the kind of level you’re faced with, each one will be required at different junctures.

There are obvious ways for you to use the different powers, but Organic Panic wants you to think outside the box; there are multiple ways of finishing each level and it’s worth experimenting. The way the water flows, the ice melts or the environments crumble does the game a great justice. Organic Panic looks wonderful, and each stage has a rich palette of colours on display, emphasising the fantastic animation of the levels and the character design.

Organic Panic gets harder the further you progress but it never overpowers you, and by the time those pangs of frustration start to show, you’ll have found a path to the finish in the nick of the time. My 6-year old daughter managed to find a way to solve many of the puzzles, and we never struggled much during our time with it. The main goal in Organic Panic is to have as much fun as possible; playing with my daughter was great and she found the whole thing hilarious, all the way from the comic sections to the amusing deaths. A multiplayer element is incorporated exceptionally well, adding couch co-op and friendly competition with plenty of variables. The couch co-op lets you solve puzzles of varying difficulty with all your friends, with certain challenges requiring up to 4 players to complete. Versus mode is where the most fun in Organic Panic can be found; again, you can have up to 4 players to compete in 3 different match types, changing the length of the games and how many you take part in. The spirit of this mode reminds me of the excitement found in the battle mode in Mario Kart, or even Super Bomberman, which is always a good thing.

It features so many levels you’ll be hooked for hours, with no two levels feeling the same. As with most games following a similar level and stage pattern, there is an element of level fatigue, and the humour can sometimes be strained and overly forced, kind of like a dad telling the same joke over and over again until you forget why you ever laughed in the first place. As far as nice surprises go though, Organic Panic falls pleasantly into this category. It may not be anything more than a game you play between big releases, but the time you do spend with Organic Panic will be worth it.

Playing with others is definitely the way to go, but if you want to kill a few hours here or there, Organic Panic is the perfect time-waster.