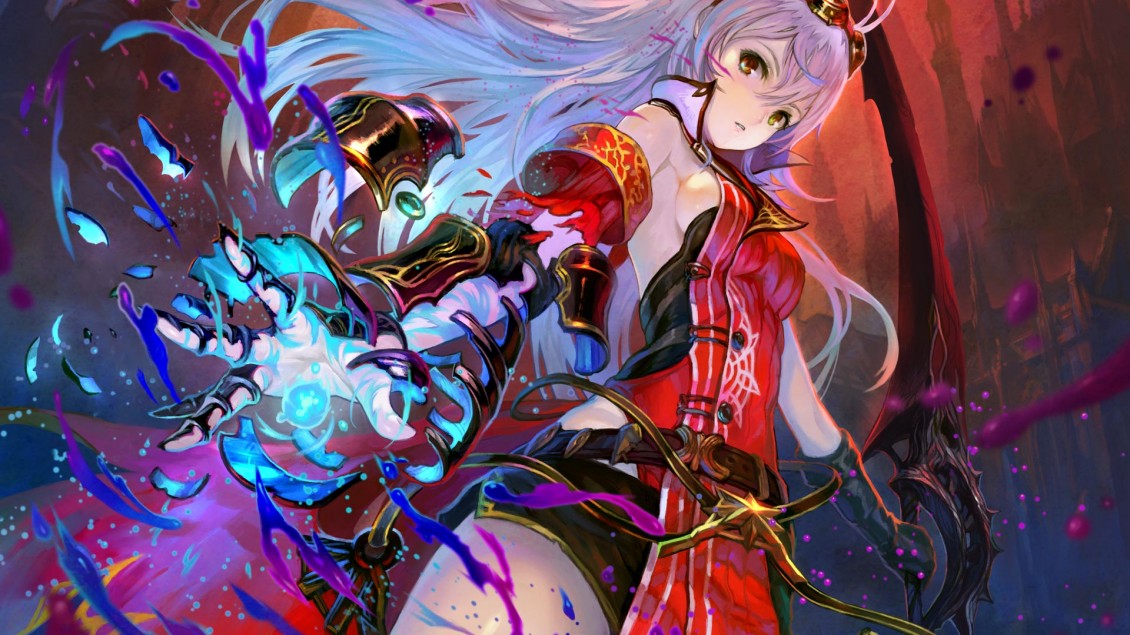 Having only recently gotten into Gust games through Ar Nosurge Plus and Atelier Escha and Logy Plus, I was really hyped for Nights of Azure; Gust’s first action RPG. Gust’s games tend to impress with their character design, promo art and great music. The fact that Nights of Azure is their first action RPG is evident in a lot of areas thanks to poor combat balancing and lots of problems in the visuals.

It’s a tale of various emotions and battles in the land without night. The Nightlord was defeated a long time ago but his essence lingers on in the form of blue blood. When someone bathes in said blood, they turn into fiends in the night and hence the city became known as the land without night. Arnice, the protagonist, is a young woman who can drink the blue blood. She is reunited with her old friend Lilysse in this new land, but their reunion is broken up when Lilysse is captured. The story involves them growing closer together with a very strong implied relationship which tasks players with deciding between love and sacrifice.

After the initial story segments are over, the Ende Hotel becomes your hub where you can access an arena for training, an altar to level up and various stores. The Ende Hotel is also the only place where you can access equipment and control the Servans you take into battle. A lot of character development happens through in-game cutscenes, and the hotel is usually where new characters are introduced. The hotel is massive and has ceiling that feels like they were designed for Gandalf in Lord of the Rings, when everyone else is as short as a hobbit. It does feel a bit too grand overall, and a tad empty. In an otherwise dark story overall, Gust did manage to throw in a few comic relief characters as well as a bit of humour to the script. Nights of Azure has you taking demons in the form of Servans into battle. Arnice can take decks of up to 4 Servans each and these companions can act either offensively or defensively. Arnice herself starts off with a demon sword and as the game progresses, different weapons like a gun are unlocked, changing things up a bit. While it is an action RPG, the difficulty is far too easy. You can get through most of the normal enemies in the dungeons without even summoning more than a single servan and just mashing square for the most part. The arena in the Ende Hotel is a great place to practice the new mechanics so you are used to them for use against bosses because they are the only enemies that pose a threat to you. Arnice earns blood through defeating enemies and this is used to level up in the Altar at Ende Hotel.

If for whatever reason you die in a dungeon, you return to the hotel and keep all items and blood earned. Given how annoying it is to navigate some of the areas, this is a welcome change from other RPGs. Each new area has a green door indicated on the map that will let you unlock quick travel to and from the hotel. This should be a priority while traversing through new areas for the first time. Enemies appear randomly in groups in every room of a new area as you pass through. Hacking and slashing through enemies will reward you in the form of drops like boosts in stats or minor heals and even tools to actualise more Servans in some cases.

Gust’s character design is usually great and it has reflected in the designs of Arnica, Lilysse and even bosses. The overall art direction makes Nights of Azure look great and dark, but environments always feel like they were designed for a smaller screen with them looking barren on the big screen. There are also some clipping issues with hair and some rigid animations.

Performance is almost perfect with a mostly stable 60fps throughout battles. There are frame rate drops when a lot of enemies appear, but they aren’t common. The camera movement is restricted to three zoom settings while giving you rotational control, which is annoying when trying to move the right stick during an intense battle only to cause the camera to zoom in. On the localisation front, there are a few typos in the script and some Ace Attorney level problems like Lilysse talking about a new batch of cupcakes while the scene showed everyone drinking coffee with no cupcake in sight. There is only Japanese voice acting in Nights of Azure, so don’t look for an English dub.

Visually Gust nailed it with the use of colours in dungeons, character models, costumes, animations and boss design. Just the opening where Arnice and Lilysse stare into each others’ eyes while the dark clouds move behind them looks great. Environments and dungeons look too bland for a home console release, which lets the game down in the visual department. The soundtrack on the other hand is fantastic. Hotel Ende’s theme reminds me of Shoji Meguro’s music from Persona 3 and the dungeon music made me think of Falcom’s amazing score for the Ys games. It’s safe to say that Nights of Azure’s soundtrack is ace overall.

It does feel like Nights of Azure would’ve greatly benefited from a little more budget in both the localisation and development fronts, because while there’s a lot to love, the flaws are too big to overlook. It won’t blow you away but it has Gust’s charm and I haven’t stopped listening to the soundtrack or picturing the characters for days. If you’ve been craving a nice hack ‘n’ slash RPG on the PlayStation 4, give Nights of Azure a go.

Gust’s first action RPG is a decent attempt let down by inconsistent visuals and various problems with difficulty.